The Mdzananda Animal Clinic in Khayelitsha was at double its capacity for stray dogs on Tuesday morning, and would have had to resort to euthanasia if people had not come forward to adopt or foster the dogs. But within hours of the clinic calling for help on Facebook, people offered the animals a safe place to stay.

“After yesterday’s post, we have got quite a few responses from people who are going to foster, so I am expecting to have 20 dogs move out of our shelter before end of next week,” said Marcelle du Plessis, the clinic’s fundraising and communications manager. “The amazing thing is, every time we get to a point of desperation, people do step in.”

When GroundUp visited the clinic Wednesday morning, three dogs had already been adopted that day, in addition to the six dogs that found new homes the day before. People have come from Mitchell’s Plain, Pinelands, Mowbray, and Sea Point.

Oscars Arc and AtFrits Pet Hotel & Daycare Centre, both of which act as adoption centres, have also agreed to bring dogs into their facilities. Oscars Arc is set to take six, and AtFrits to take 16.

AtFrits is primarily a creche for dogs, but since it is able to take in 276 animals, it dedicates space for animals that are in need. The dogs from Mdzananda Animal Clinic will receive the exact same care as customers’ dogs. They will have access to the dog park and be fed three times a day.

The clinic has never euthanised an animal due to overcapacity, but it had never been as desperate to find adoptions and foster homes. It had 37 dogs on Tuesday morning, but only has the capacity to care for 15.

“It has been very quiet in the past month,” said Lisa Godana, the clinic’s administration assistant. In April, only eight dogs were adopted, compared to nine dogs in just the past two days as a result of the Facebook post.

Du Plessis said people handed over their pet if they were moving away or could no longer afford to take care of it anymore. People also tended to give up their dog when it was no longer a puppy. Du Plessis said a two-year-old dog was once handed in just because it was not young anymore.

“Lately we find animals in our yard in the morning, so a lot of people are throwing animals over gates overnight,” du Plessis said. “People do come over and hand over pets physically, so we can still talk to them. But it’s quite hard to track people’s reasoning for abandoning pets.”

Since Mdzananda Animal Clinic is primarily a veterinary clinic, taking strays is not a service it intended to provide. However, the clinic has decided that it will not to take in any new strays until its numbers are stable again, du Plessis said.

“People who come with strays, we’re going to have to talk to them and try to get them to take responsibility for their own pets, or give them the option to put their animal to sleep,” du Plessis said.

As for the pets that continue to be thrown over the gates overnight, however, du Plessis said the clinic will have no other option than to take care of them. 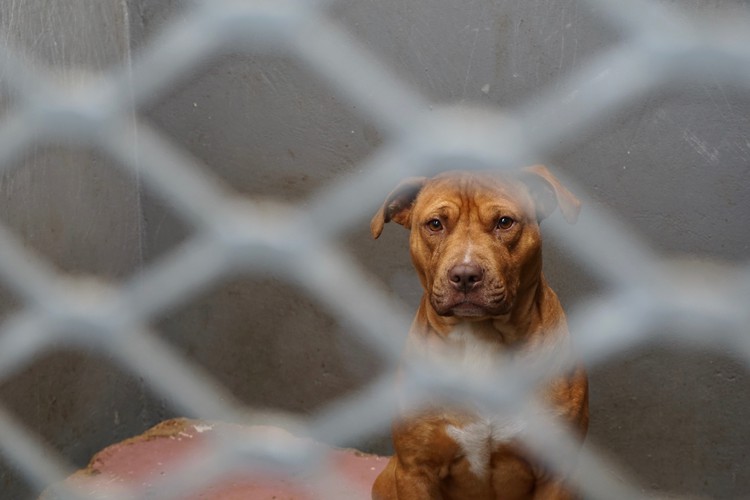 Tiger, one of the clinic’s three pitbulls, is still waiting to be adopted after three weeks in the clinic.

The clinic’s finance assistant Tashmin May is especially worried for the three pitbulls that are currently staying at the clinic, since they have to stay in their own kennels. Obama has been here since the beginning of April, and Lady and Tiger have been here for about three weeks.

“They are getting very depressed in the kennels and they need more space,” May said. “There’s the stigma that pitbulls are very aggressive, but they’re not really. It’s just the way that they’ve been brought up.”

May said one of the difficulties for finding a family for pitbulls is that it has to be a one-dog home. Another issue is that the clinic does not allow people living in the Cape Flats to adopt pitbulls, due to the prevalence of dog fighting in the area. She said people will steal pitbulls to enter them into fighting competitions, which people bet on.

Strays at Mdzananda on average stay at the clinic for two to three months before adoption, but have stayed as long as eight months, according to du Plessis.

Next:  One year after Parkwood housing protests, residents sceptical about promises made

Previous:  Mokonyane out of Parliament