Plants are being given Zulu names. Here’s why it’s important

Naming invasive species will help to destroy them, says conservationist 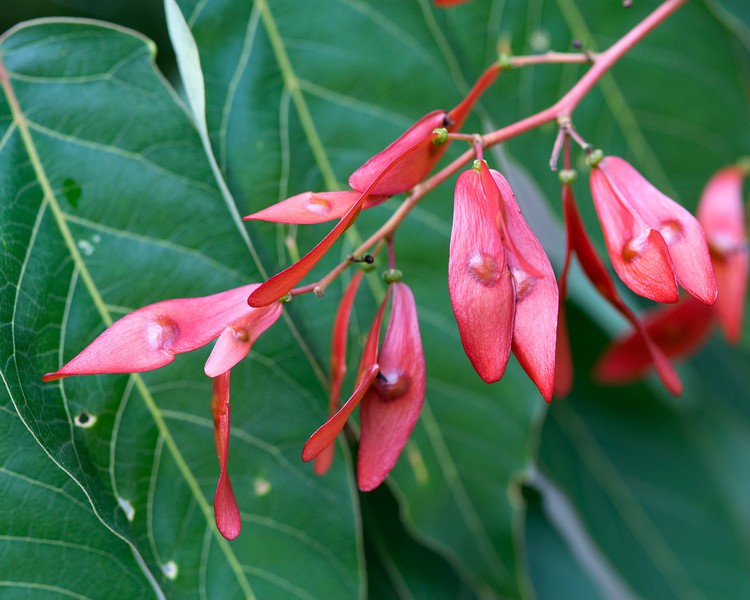 Tree of Heaven has a lovely sounding name, but this invasive tree grows in dense stands and produces a herbicide that kills or stunts indigenous plants near it. Photo: Plant Image Library via Flickr (CC BY-SA 2.0)

When conservationist Menzi Nxumalo spoke to people in rural KwaZulu-Natal, he struggled to communicate with them, even though they were speaking the same language. “We’d go to communities and try to communicate to them about the impact of invasive species, but we failed to deliver the message because of the communication failure,” he explains.

To address this, Nxumalo in collaboration with colleagues in the provincial government and academics is working to create lists of invasive species in local languages.

Invasive species are plants, animals and organisms that have been brought into the country either by accident or on purpose as pets, ornamental garden plants, or because they are agriculturally important, such as pine trees. But because they lack native predators, these invasive species can spread and overwhelm natural ecosystems.

According to a 2018 report, invasive species cost the economy more than R6.5-billion a year and threaten to guzzle a third of the available water. Government currently spends about R1.5-billion annually to curb the spread of invasive species.

But language barriers are hampering efforts to weed them out. “All the material is documented in English, so it becomes difficult for people in rural areas to understand the message,” says Nxumalo, who works for the South African National Biodiversity Institute.

“If I speak to a Zulu person, I speak to them in isiZulu,” says Bheka Nxele, a programme manager for restoration ecology, environmental planning and climate protection in the eThekwini municipality. But when speaking about plants, he has to lapse into English. “It creates the assumption that managing the environment is the responsibility of a select few.”

When it comes to local names for plants and animals, the team found that there was a great deal of confusion. “Because these species have been here for decades and decades, people tend to give them names, but [the naming] is not structured. They give them names of plants that are similar,” says Nxele. “If it looks similar to an indigenous species, they’ll give it that name, so they might end up propagating the invasive [instead of a native species]. And if they want to use [the local plant] for medicine, they might use an invasive [by accident].”

Complicating things further are regional differences. “We decided to bring together a group from northern and southern KwaZulu-Natal, the south coast, and inland. They each came with their own Zulu comprehension, and we came up with the terms [for some invasive species] in isiZulu,” he says.

The next step was to see if isiZulu speakers in the province would accept the names that had been devised. After compiling a list of more than 110 species names, the team visited communities to trial the names and to see if there were any new additions.

At a workshop in Engonyameni area in uMlazi, Nxele realised the importance of the traditional knowledge held by older members of the community. As far as the team was aware, there was no local name for water lettuce (Pistia stratiotes). This green, leafy aquatic plant, originally from South America, forms a dense mat on lakes and dams, blocking out all the light and asphyxiating creatures living in the water.

“Nobody knew what it was called in isiZulu,” he recalls. “Just as we were about to derive a name for it, a woman raised her hand and said, ‘Please allow me to go back and check with my mother what this is, because it looks familiar but I have forgotten the name.’” Her mother knew it as “indwane”.

In isiZulu, there is a saying: “Umfula udla izindwane”. It is a warning not to cross or approach a river because it is dangerous. “The direct translation for this is ‘a river (when flooding) is walloping izindwane,’” explains Nxele. “Izindwane” is the plural form of “indwane”. “Essentially this means, because pistia floats on water, when a river floods there would be high quantities of pistia coming downstream and people derived the saying ‘The river was so full it was bringing down volumes of pistia.’”

“Had we not had the workshop, the granny would have taken this knowledge to the grave with her, because the young generation is doing far less to inherit the knowledge from the previous generation,” Nxele says.

Last year, the team published a paper in the Journal of Biodiversity Management & Forestry, describing how they have been finding names for invasive alien species in KwaZulu-Natal.

Despite the work that they have done, the team members are all employed by different organisations and there is no dedicated budget to create or consolidate language for invasive species. “We try and link this project to our everyday tasks so that we can get time and budget from there,” says Nxumalo.

In their paper, they recommend that the government prioritises the naming of invasive alien species in indigenous languages. “So when people speak, they speak in their own language and have their own negotiation of meaning; that way they will know that [these species] are not wanted,” Nxele says.

And in instances in which there is no local name and a name has to be created, it should be a negative name, he says. “Negative species should have negative names.” He gives the example of the Tree of Heaven (Ailanthus altissima), an Asian tree that can grow in dense stands and produces a herbicide that kills or stunts other plants near it. With a name like Tree of Heaven, “someone might even be tempted to plant it in their garden, not destroy it”.

The issue of the environment and local languages extends beyond invasive species, though. “We’re also translating conservation terminology into indigenous languages,” says Nxele. “If you talk about biodiversity with us Zulu speakers, we don’t have that [word]. Ecosystem services, we don’t have that. If we speak to people in our language and then lapse [into English], we lose them.”

Next:  City withdraws advert to lease golf club for less than R1k per month