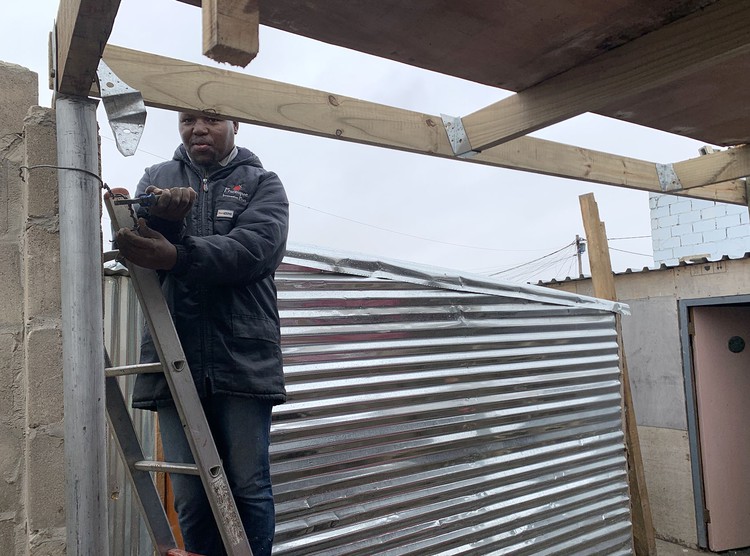 Adding a second storey to his shack in Dunoon, built on the illegally occupied municipal sports field in Dunoon, Yanga Nkohla says land was prioritised for golf courses rather than houses because “white people don’t want us close to them”. Photo: Peter Luhanga

A City of Cape Town notice advertising the renewal of a ten-year lease on the 49ha King David Mowbray Golf Club for R11,500 per year, which sparked a campaign and petition for the well-situated public land to be used for affordable housing, has been withdrawn.

The notice was placed by the City on 24 July ahead of the expiry of the club’s current ten-year lease. It followed a similar ten-year lease renewal notice for the adjacent 45ha Rondebosch Golf Club, situated directly across the Black River, which was advertised in February this year.

Cape Town has a severe housing shortage, exacerbated by economic conditions following the Covid-19 lockdown which saw 109 illegal land occupations across the city in the last two months. The renewal of cheap leases for golf clubs on prime City-owned open land has not been well received by activists and residents struggling to house themselves.

Before participating in the illegal occupation of the Dunoon municipal sports field in 2018, Yanga Nkohla had been living in a backyard shack since 2006, first in Khayelitsha before relocating to Dunoon in 2010.

Speaking while building a second storey on his shack, he said renewing the golf clubs leases “is bullshit”.

“White people don’t want us close to them. They say we drink and make noise. They don’t want us near them. That is why they would prioritise golf as opposed to housing for accommodation,” he said.

Notice of the Rondebosch Golf Club lease renewal led to housing movement Reclaim The City obtaining 1,660 objections that were handed to the City prior to the 9 March deadline for public comment, according to researcher Michael Clark at the activist organisation Ndifuna Ukwazi.

A decision on the renewal of the lease for the Rondebosch Golf Club has yet to be made, the City has stated in response to questions, and the notice for renewal of the Mowbray golf club lease has been withdrawn as it “was placed prematurely”.

The reason given was the application received by King David Mowbray Golf Club to renew the lease “relates to a significant right to be granted the use and management of an immovable property asset, i.e. potentially being a period of more than three years and involving an asset value of over R10 million”, and so must “first be placed before Council for authority to advertise”.

But the notice for renewal of the Rondebosch Golf Club lease did proceed through council.

When it appeared for approval by subcouncil 16, it was passed after a short debate on advocacy for affordable housing, with the reasoning being that a housing development takes up to five years to pass through the various planning processes and tender awards before ground is broken. If any development decision was initiated, the two year notice period within the lease could be initiated at the appropriate time.

While Council has approved advertising the lease renewal, the City has yet to take a decision on the lease, stating all comments and objections received would be considered and “placed before the delegated authority in the final decision making process”.

The City has since reconsidered the annual tariff for golf course leases. In February, at the time of the notice for renewal of the Rondebosch Golf Course lease, it was reported as R920 per annum, but in May it was increased by Council to R10,000 per year, excluding VAT.

While it is a ten-fold increase, the annual lease amounts remain “incredibly low”, states Ndifuna Ukwazi, adding that it “masks the City’s failure to redistribute public land”.

The King David Mowbray and Rondebosch Golf Clubs occupy the equivalent to 94 rugby fields of well-located land close to schools, hospitals, light industry, and within easy reach of the city centre. The golf clubs are also close to transport nodes. The Metrorail Cape Flats line connecting the city centre to Pinelands, Athlone, Lansdowne and Ottery runs through the middle of the Mowbray golf course.

Calculations publicised by Ndifuna Ukwazi put the golf clubs’ proposed new rentals at R19.36 per hectare per month, and note this is less than the cost of two litres of milk.

“The City continues to assess City-owned land,” said Mayco Member for Human Settlements, Malusi Booi. This includes “suitable land in and near the Cape Town CBD and other urban centres to determine whether some of these properties could be developed for affordable housing opportunities”.

Booi said “all workable options” were being considered “to see how to increase the affordable accommodation stock in Cape Town or to help enable the provision of more stock in the market”.

He said tackling the challenge, which was not unique to Cape Town, required partnerships.

An updated Human Settlements Strategy that “clearly stipulates the City’s human settlements agenda” would be made public in September for civic engagement.

He said the department has a capital budget of R812 million for the 2020/21 financial year and has R1.3 billion worth of projects underway “or in the pipeline in the short and medium-term”.

There are over 300,000 people formally registered on the City’s Housing Needs Register; the informal need is estimated to be significantly higher.

Next:  Dire conditions in Eastern Cape clinics made worse by pandemic

Previous:  Plants are being given Zulu names. Here’s why it’s important