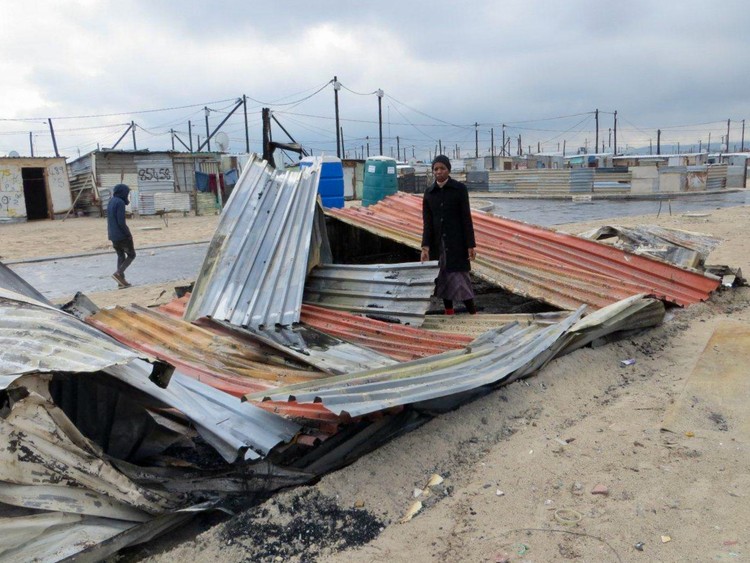 The shack of community activist Nikelwa Maqula burnt down on the weekend. Harare police are investigating a case of arson. Photo: Vincent Lali

In what is being investigated as an arsonist attack, a community activist’s shack burnt down on Sunday morning. This comes as tensions in the Backstage community of Khayelitsha escalate, as the City of Cape Town implements its plan to relocate people from Enkanini informal settlement and Makhaza backyarders to serviced sites in the Backstage area. The Enkanini shack dwellers are living beneath high voltage electricity lines.

Community activist Nikelwa Maqula says she is seen as a stumbling block to the project. She said that at about 4am on Sunday a resident woke her up at her parents’ place nearby to tell her that her shack was burning.

SAPS confirmed that Harare police are investigating a case of arson.

“I don’t even have money to buy materials to rebuild it as I’m unemployed,” she said. Her son’s school books and uniform, and her bed, wardrobe, TV, blankets and clothes were destroyed.

“I saw a resident take a five-litre container of petrol to a community meeting at about 3pm on Saturday. Today, I saw a burnt tyre at the door of my burnt shack,” Maqula told GroundUp on Sunday.

In a local WhatsApp group she accused project steering committee member Mthuthuzeli Takuta of being responsible and repeated the allegation to GroundUp.

Takuta, who also lives in Backstage, flatly denies having anything to do with the burning of Maqula’s house.

Maqula said she has not been sleeping at home ever since a community leader said she must be “dealt with”. She says her offence has been to restrain community leaders from removing people who occupied land in the Backstage area earmarked for the Enkanini resettlement. She says they should only be moved if they can also be relocated to serviced sites.

She said that at a public meeting in November 2019, Mayoral Committee Member for Human Settlements Malusi Booi had promised this would happen. “We sent Booi countless messages asking him about the serviced site, but he never responded,” said Maqula.

GroundUp tried numerous times to reach Booi. We received the following response from the City attributed to him: “The City continues to engage and look at options. It must be emphasised that violence will not be tolerated under any circumstances. Any information on such actions must be reported to the SAPS.”

Takuta says there were 62 families already staying on the land in Backstage, and they are included in the relocation project for serviced sites in the area, together with 144 families from Enkanini and Makhaza.

The City started to implement the project in 2020, but the contractor halted work because of the Covid lockdown. This is when more people started to occupy the land in Backstage earmarked for relocation. The occupiers were not removed due to lockdown regulations.

“Now some of the land occupiers don’t want to leave even though they are not the beneficiaries of the project,” said Takuta.

“The company can’t work while the occupiers stay on the land. We want the City to use its powers to remove the residents because they are blocking the project,” said Takuta.

One of the Backstage land occupiers, who asked to be anonymous, said the City never properly counted residents who were staying on the land before the project was announced.

She said ANC member of the Western Cape Provincial Legislature Andile Lili visited Backstage on Wednesday and threatened leaders who opposed the relocation of the shack dwellers.

But Lili denies saying this or threatening anyone. Lili, who was the ward councillor for the area until 2019 and involved in the project, told GroundUp the “land occupiers are messing up the development project”.

He told GroundUp: “Black oppressed people should practice high levels of tolerance amongst each other and recognise that the conditions that they find themselves in and the crisis of housing in Cape Town is not by their own making … They should vehemently reject any attempt to divide them.”

Buhle Booi said that the people set to be removed from the Backstage project land are not averse to being relocated. But, he said, they are being relocated to land under the power lines in Enkanini, an area without basic services, to the “very circumstances, along with other considerations, that had necessitated the evacuation and relocation of the previous inhabitants of that site”.

They also do not know if this is a temporary or long-term arrangement, nor did they give informed consent.

“The City Of Cape Town should meaningfully engage all affected parties to find an amicable solution rather than elect to forcefully remove the affected residents,” he said.

GroundUp has tried since Monday to get clarity from the City on the project and the relocation.

According to Councillor Malusi Booi the relocation site in Enkanini does have “shared services, such as flush toilets and stand pipes for fresh drinking water”.

“The City can confirm that 31 people are blocking progress of this entire project.”

“The unlawful occupation … has brought the project to a halt and construction is not able to proceed, affecting beneficiaries as well as the project.”

“The City is engaging the project steering committee comprising leadership and community representatives.”

A further response from the City of Cape Town has been appended to this article.

Next:  City blames occupiers for “hampering development” in Soshanguve