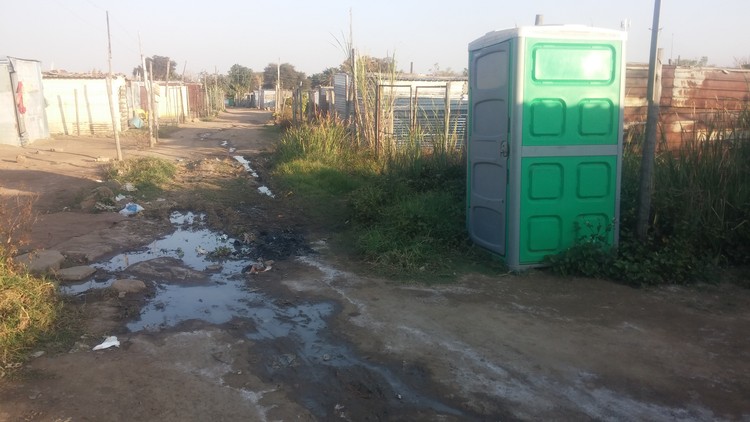 One of the three chemical toilets shared by almost 300 households at Kopanong informal settlement in Soshanguve, Gauteng. Photo: Chris Gilili

About 300 households at Kopanong informal settlement in Soshanguve, Gauteng, say they sometimes go weeks without water. They also rely on illegal connections for electricity.

Some of the families living in Kopanong were relocated to the settlement from Stoffel Park and Extension 11 in 2015. More people have since moved to Kopanong, but those who were relocated there say they were promised serviced stands with water and electricity, but none of this has happened.

When GroundUp visited the area, we saw children relieving themselves in an ice cream container. When we asked residents about this, they stated it was the norm because the three chemical toilets are always busy or dirty.

Ward committee leader Molefe Mphofela said the community has staged several protests, demanding better services from the City of Tshwane, but to no avail. He claimed that the informal settlements around them have received taps and electricity.

“There’s not a single communal tap in Kopanong. The City knows about our existence, we just need them to recognise this place so that we can get basic services,” said Mphofela.

Resident Christina Setana said, “We feel like we were dumped here and forgotten. You can see how inhumane it is here. This whole area is a damp soil, our yards flood when it rains. Some people have even abandoned their structures. We steal electricity from Soshanguve Ext 5. Sometimes they switch it off and go five days in the dark.”

City spokesperson Selby Bokaba said the land that Kopanong residents occupied is earmarked for business and transport development. “This was unfortunately hampered by the invasion by the illegal occupants,” said Bokaba.

He said qualifying Kopanong residents, who meet the criteria for housing, will be relocated to a developable area. “Plans in this regard will be communicated as soon as a decision is taken. This will depend on the availability of land and funds,” he said.

Next:  Dilapidated Limpopo hospital has to send its laundry 30km away to be washed