Kraaifontein shack dwellers flooded out of their homes 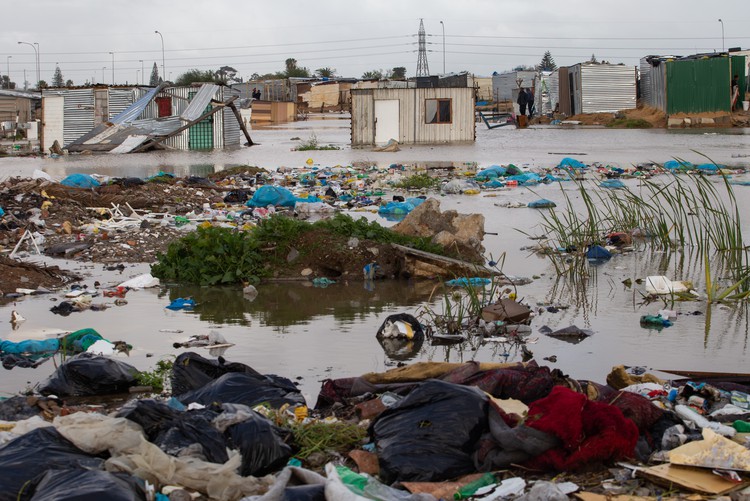 Scores of shacks at an informal settlement in Bloekombos, Kraaifontein, were waterlogged on Thursday after days of heavy rainfall in Cape Town. These shacks began mushrooming soon after the Covid-19 lockdown began last year.

“They’re going wherever I’m going,” said Medison Vermaak, pointing to a bucket she was carrying with four kittens inside as she walked through ankle-deep water wearing gumboots and a rain jacket. Since Monday, sporadic heavy downpours have caused flooding across the Cape Town metro, particularly in low-lying areas and wetlands. Areas affected include Wallacedene and Siqalo near Mitchells Plain.

On the flooding in Bloekombos, the City Disaster Risk Management spokesperson, Charlotte Powell said, “The settlement is in a detention pond and no practical, or reasonable, remedies are available.” She said that a request has been made for SASSA to provide relief.

Mayco Member for Human Settlements Malusi Booi said that the pond in the area “is designed to catch water” and “the water cannot feasibly be removed”. He said that the majority of the reported flooded areas “are situated on land that is not suitable for habitation, like wetlands, waterlogged areas and private land which have been unlawfully occupied”. 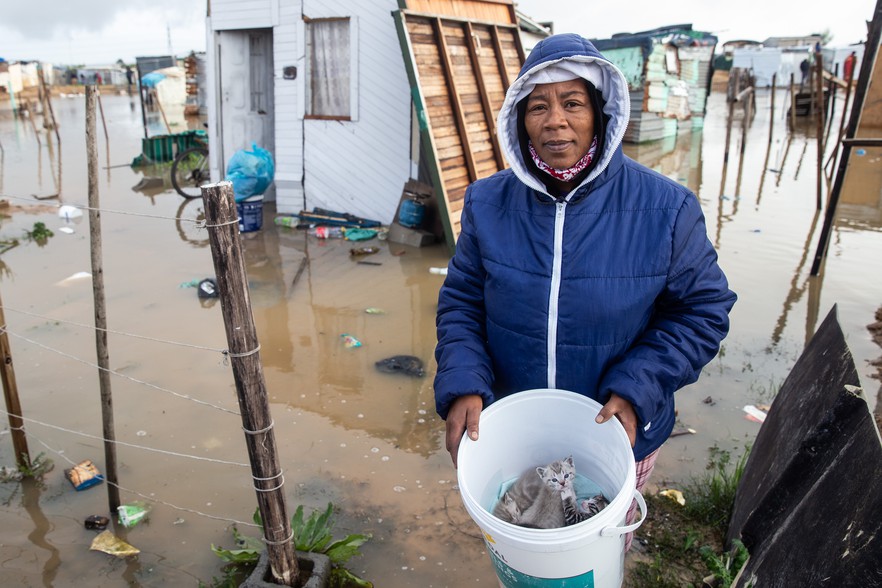 Bloekombos resident Medison Vermaak and her four kittens. Vermaak’s home was completely flooded on Thursday. “I actually don’t have a place to go” she said. She would try and spend the night with some friends. In some parts, the water was over 30cm deep. 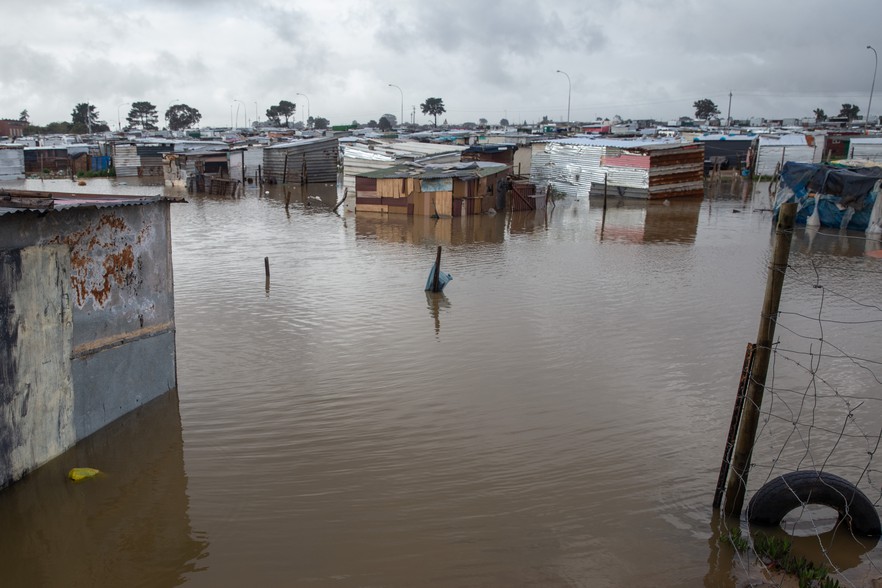 Community leader Linda Phito said that people started moving onto the land in Bloekombos in March 2020, after lockdown. He said that the lockdowns were really difficult because it resulted in many people losing their jobs. This section of the settlement is named Covid. Phito said that most people staying there were backyarders who could no longer afford to pay their rent. 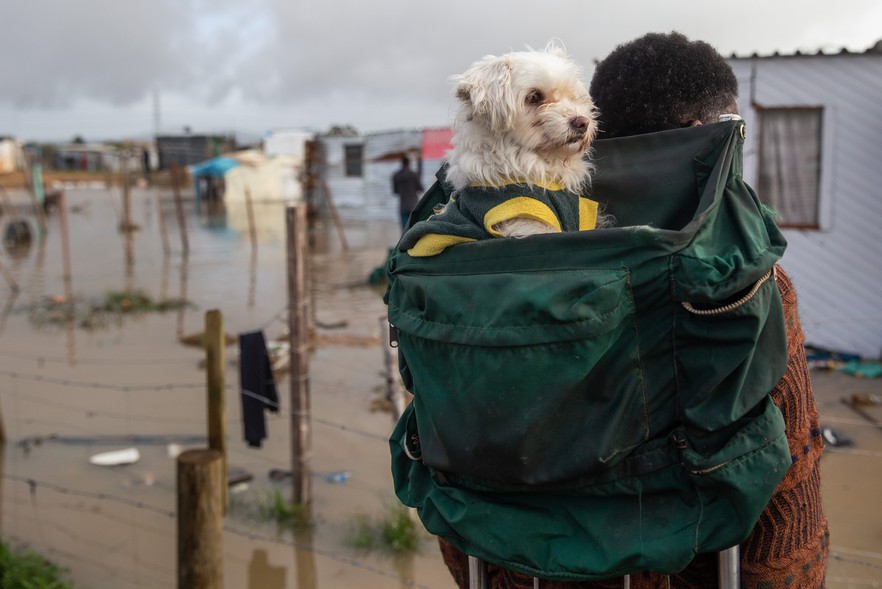 Paul Josephs and his eight-year-old dog, Cloey, came to assist Vermaak move her belongings and other items from her flooded home. He said that he was one of the fortunate people as his place had not been flooded. 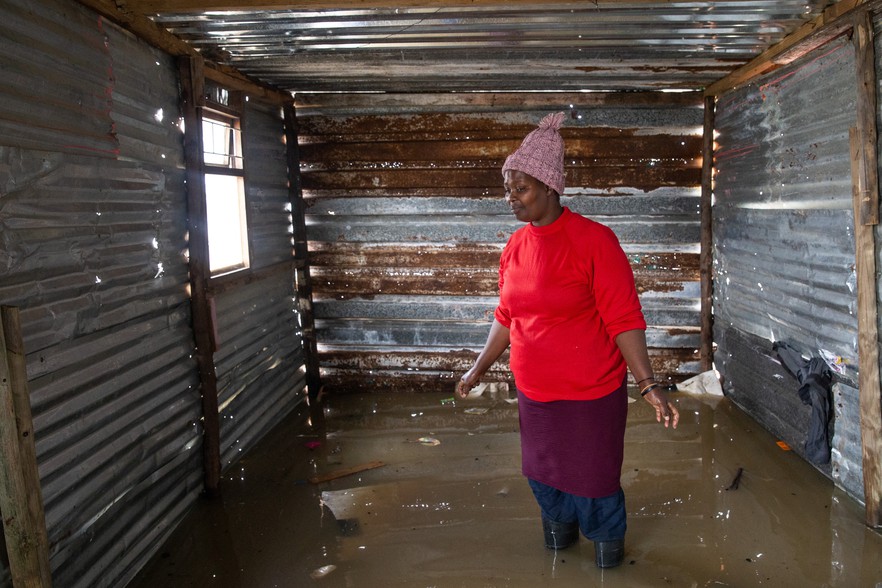 Nontobeko Gladys Mehlo lives with her daughter, son-in-law and two grandchildren. The family’s home is flooded and they have nowhere else to sleep tonight. Mehlo said she moved to Covid in February 2021, when she could no longer afford rent in the backyard where she lived. “Maybe government can help to remove the water, then bring the sand, then we can rebuild again,” she says. 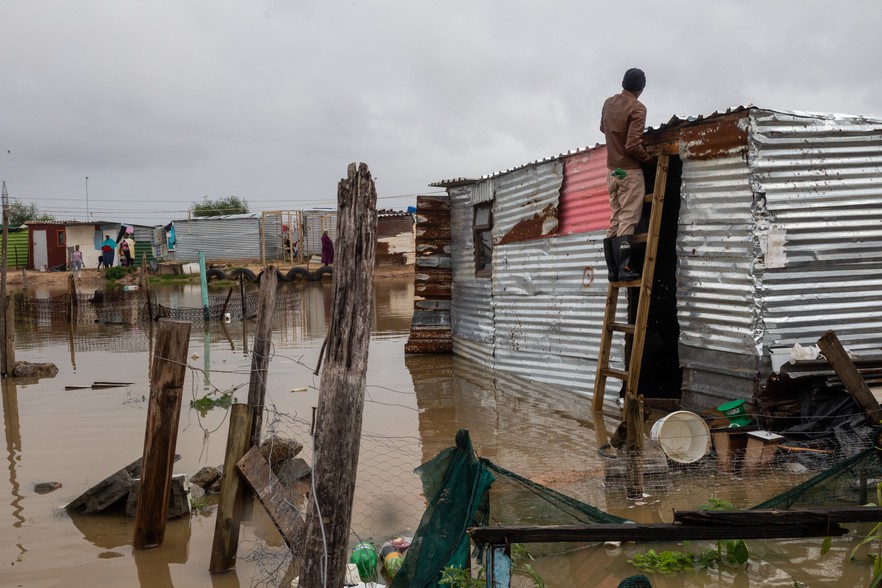 Even though it was flooded, Mehlo was getting assistance from other residents to repair holes and secure her roof. She has plans to move her belongings back as soon as the water goes down. Phito says that they are pleading for assistance from the City of Cape Town and have asked for those affected by the flooding to be given alternative accommodation.