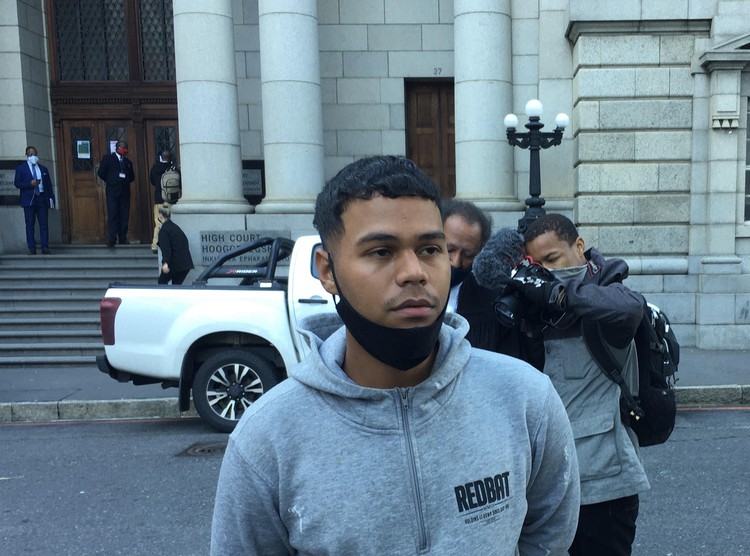 Ginola Phillips from Hangberg outside the Western Cape High Court on Wednesday where Judge Gayaat Salie-Hlophe ordered the City of Cape Town to rebuild his home within 48 hours. The structure was demolished twice in June by the Anti-Land Invasion Unit. Photo: James Stent

The City of Cape Town has 48 hours to rebuild the home of Ginola Phillips in Hangberg which its Anti-Land Invasion Unit (ALIU) demolished twice last month.

This is according to a ruling by Western Cape High Court Judge Gayaat Salie-Hlophe on Wednesday.

In June, Phillips’ house was demolished in the middle of a winter storm. This action sparked days of protest in the Hangberg community, near Hout Bay. Phillips had built the wooden house on a plot of land owned by the City, on which there were several similar structures that had been there for years.

In August 2019, despite opposition from local residents, the City leased the entire plot to a crêche that was built on part of the Erf. The crêche was burnt down during the protests that followed Phillips’ eviction.

On 3 June, the ALIU served Phillips with notice to tear down his structure. The unit returned on 11 June with the South African Police Service and the City’s Law Enforcement unit and destroyed the house. Phillips rebuilt his house by 13 June, but the ALIU returned on 19 June, to demolish the structure again.

On Wednesday, Judge Salie-Hlophe condemned the City’s actions and conduct as “unlawful and unconstitutional”. She said the demolition of Phillips’ house amounted to an eviction and was therefore in violation of lockdown regulations as well as the Prevention of Illegal Eviction Act (PIE Act).

Judge Salie-Hlophe said that the City “did not follow the procedure prescribed in the PIE Act. Put bluntly, they acted unlawfully.”

The City must within 48 hours rebuild a similar wooden structure for Phillips, of the same size and dimensions of the house demolished in June, she said. The City must then file paperwork confirming the completion of this structure with the Chief Registrar by 2pm on Friday 17 July.

Phillips’ application was supported by 147 members of the Hangberg community. This “illustrates the ubuntu of the community and the solidarity to the plight of housing,” said Salie-Hlophe.

The City was ordered to pay the costs of the application.