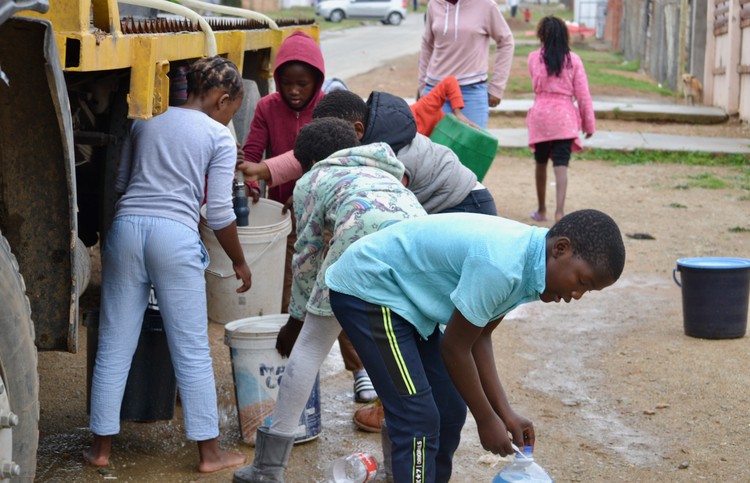 Residents fetch water from a truck on Jongilanga Street, KwaNobuhle. There is more demand than water to go around. Archive photo: Thamsanqa Mbovane

Ngamlana was speaking at a webinar on Thursday to highlight urgent challenges related to water access for vulnerable communities across South Africa.

(Other participants in the discussion included, the Centre for Applied Legal Studies, the Centre for Environmental Rights, and the Legal Resources Centre (LRC) in partnership with several community-based organisations such as Masifundise, Coastal Links, the South African Water Caucus, Environmental Monitoring Group, Afesis-corplan, the Vaal Environmental Justice Alliance (VEJA), and C19 Peoples’ Coalition.)

In a statement, the South African Water Caucus said that 27 communities had been “crippled by the lack of water access during the Covid-19 pandemic”.

The organisation said it had repeatedly appealed to the Department of Water and Sanitation to deliver sufficient water to these communities during the national lockdown but had little success.

Boyisile Mafilika from Masifundise Development Trust said that community members in “neglected regions” and metropolitan areas were forced to use their social grants to pay for what is often poor-quality water.

“They have to go and buy their own water tanks which cost about R2,000 for 2,500 litres. They must then transport the water tanks from town to their village for R500 and then find someone to put up a platform for the water tank.

“If you want proper water, you have to dig into your own pockets,” he said.

Mafilika said water tanks were meant to be the responsibility of municipalities. They need to refill them when they are empty, and ward councillors should be responsible for taking care of those tanks,” he said.

Mafilika said they were also approached by the community of Centane in the Eastern Cape over the ongoing water crises there.

“It’s so painful when you see old people drinking dirty, smelly water with animals. Yet there are officials going around giving false information, saying that it is going well in those villages,” he said, referring to a report by local officials released in April.

Fixing iNgqushwa Yethu founder and chairperson Athini Ngxumza said that more than 100 villages are without running water in Peddie.

Ngxumza said they too have sent multiple letters to the President and the Eastern Cape Premier’s office requesting that they “intervene in the water issue especially during the pandemic” but no one has responded.

“We felt insulted … because we are drinking out of filthy dams. The water from the dams is not even fit for animals, but they expect us to drink it,” she said.

Ngxumza said they are demanding that money be allocated to Amathole to enable them to improve their water system, recycle, and reuse their water.

Shaatira Hassim from the LRC said that despite using litigation in the past to highlight the difficulties faced by communities, they are willing to engage with the government to explore long term solutions.

“We want action by the government. Not only action with access to water but access to clean drinking water that is accessible to communities.”