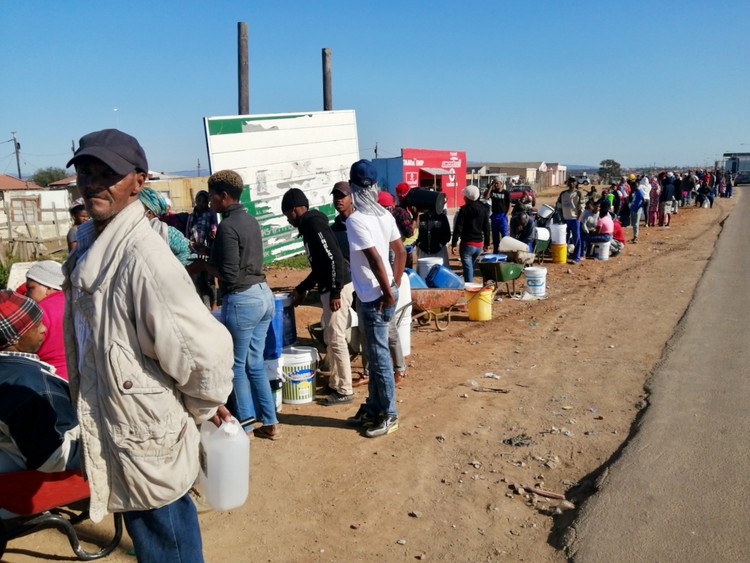 Ever since Nelson Mandela Bay declared Day Zero, due to its dams running dry people have been struggling to cook, wash and drink water. Residents are furious over inadequate arrangements by the municipality. The situation was aggravated by repair work which made some people panic when water did not come back.

On Wednesday, Mongameli Bobani, Mayco Member for Infrastructure and Engineering, released a statement about repairs on a broken water pipe in KwaZakhele township.

“Water will go off around 7am [Thursday] to enable a contractor to reroute a 450mm water main pipeline. The shutdown will affect Ibhayi, Govan Mbeki, Veeplaas, Soweto on Sea, New Brighton, KwaZakhele , Zwide and Missionvale. More water tankers will be added as and when the need arises,” he had said.

In Zwide, dozens of people with empty buckets waited on the corner of Mbane and Koyane streets from 7am on Friday. Eventually residents started to burn tyres at the traffic circle.

Resident Pinkie Rasi said, “This is nonsense and the municipality is not even doing loud hailing to inform us when the truck is coming. We will not tolerate this forever because water is a basic need.”

On Friday afternoon, over 100 KwaNdokwenza residents waited more than four hours for water trucks. Resident Zuko Peter, sitting on an empty bucket while waiting, said: “I have never seen a situation like this before. For the second consecutive day, our taps have run dry out of the blue … This is really frustrating and it’s unacceptable.”

Nonyameko Ganyaza, who lives in the hostel with four children, said she was panicking. She had been queueing alongside her neighbours since 8am.

Ganyaza said, “We didn’t even cook pap in the morning for the children. Clinics have no water, schools as well, and we don’t even know when will the truck arrive.” 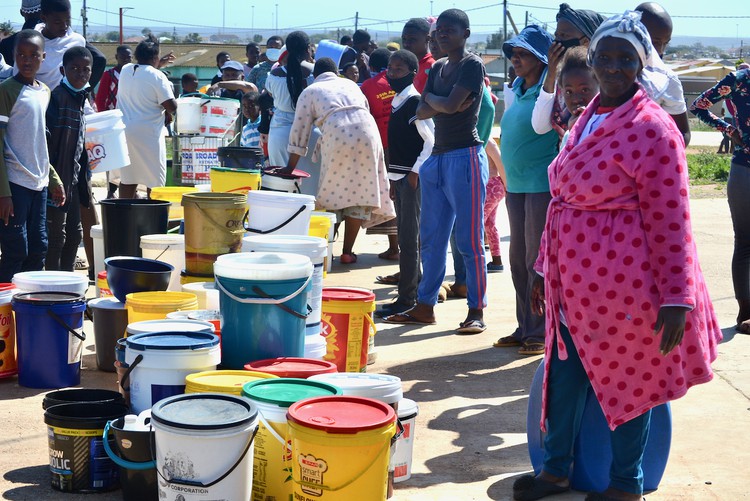 Hundreds of people in Missionvale, Smartie Town and Rolihlahla townships were furious with the municipality’s failure to supply enough water tankers.

Nokwakha Matiwane from Missionvale said, “Since Thursday we have no water. At home I have ten children, including grandkids. They could not go to school because there is no water to cook porridge for them.

“The water tanker arrived yesterday but the water was quickly finished before we could get it. We are only helped by these dripping communal taps.”

Nandipha Legawe said, “I have asthma and since 4am I have been queueing here wearing this dressing gown. We have to run after the water tankers and I can’t. I would rather wait in this queue for this dripping tap that takes almost an hour to fill a bucket.”

“I won’t vote because our leaders don’t care about us. Why do we have to queue and push one another for water?”

Municipal spokesperson Mamela Ndamase at 2:20pm said, “The City has completed the work that was being done and we expect that residents will have water in an hour or so. It will be low pressured but it will build up as the time progresses. By late this afternoon, we expected residents to have water fully.

“This work affected all the big residential areas with a high population including Zwide and KwaZakhele, when we had a total of nine water tankers roaming around the affected areas. We apologise for any inconvenience caused and thank our residents for their patience.”

Next:  PE’s Day Zero: a result of poor planning and a failure to fix leaks