How did a disguised advertising campaign trend to number one in South Africa? And how often does this happen? 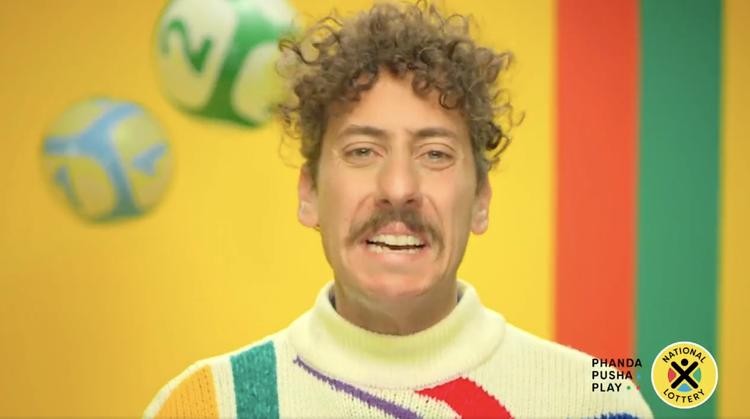 Comedian Schalk Bezuidenhout did an advertising campaign for ITHUBA on Twitter. The logo in the bottom right corner and a hashtag #ad indicated that this was a paid-for promotion, but two other videos by comedians Celeste Ntuli, and Skhumba Hlope contained no indication that they were adverts. Screenshot from video on Twitter (fair use)

Between 11 and 13 August, the hashtag #KnowYourNationalLottery trended to the number one position on Twitter in South Africa. How? There was nothing in the news that suggested this hashtag should trend.

When we looked at the tweets, many, perhaps most, appeared to be recycling very similar text, espousing the benefits to society of buying lottery tickets. These included, for example, that lottery money goes to good causes and that spaza shops receive commission for the sales they make and that this was a good way to spend R5.

The tweets, while seldom precisely identical to each other, appeared robotic.

On close inspection, this appeared to be a paid advertising campaign, albeit we could find nothing that clearly identified it as such. We sent questions to ITHUBA, the National Lotteries Commission (NLC), Twitter and the three comedians.

Twitter, as appears to be their standard practice, didn’t bother to respond.

The NLC emphatically denied it was behind the campaign.

But ITHUBA, the operator for South Africa’s national lottery, responded that it was indeed their advertising campaign.

What this means is that the top trending hashtag on Twitter was not the result of organic tweeting, but a paid for advertising campaign that was not clearly marked as such. We wanted to know how frequently this happens. For example, have any political hashtags trended to the top of South African Twitter via paid for advertising campaigns? But we can’t tell you because Twitter didn’t respond to our questions.

This week Twitter whistleblower Peiter “Mudge” Zatko made numerous damning allegations about Twitter including, according to CNN, that “Twitter executives don’t have the resources to fully understand the true number of bots on the platform, and were not motivated to”.

See also: The most jaw-dropping claims laid out by the Twitter whistleblower

What fake news about corruption does the advertising campaign refer to?

Of the comedians and influencers using the hashtag, only Bezuidenhout indicates that it is a paid campaign (with the hashtag “#ad”).

In the video, which has over 33,000 views at time of writing, the comedian says “Now I see people going on on social media …” followed, in a sarcastic dramatic voice with “Ooh the lotto, they’re stealing everyone’s five rands! There’s someone from the lottery taking everyone’s five rands and building a mansion in Fourways, which is a kak place anyways.”

Then in a normal voice he says: “That’s not true. Your five rands are not going to Fourways. But it does go … four ways.”

When Bezuidenhout talks about something being “not true”, what is he referring to? The impression in the advertisement to a casual observer is that the news coverage on corruption at the national lottery is ‘fake news’.

Over the past four years, GroundUp and Limpopo Mirror have exposed grand corruption at the National Lotteries Commission. We have shown how money meant for old age homes, schools, and drug rehabilitation centres has instead been used to buy luxury properties for people inside and connected to the NLC. The stories have stood the test of time. The Special Investigations Unit has frozen assets of people involved in Lottery corruption and several of those implicated have faced disciplinary action, resigned or been pushed out.

So it’s unclear to us how Bezuidenhout, whose script was presumably supplied to him by ITHUBA, can effectively claim that that news of corruption at the lottery is fake.

ITHUBA is the company that manages the lottery draws. It is an appointed position that was extended for another two years last month. The National Lotteries Commission (NLC) manages the operators and disburses a portion of the lottery’s income to non-profit organisations. GroundUp’s reporting has not, thus far, focused on ITHUBA, but the NLC.

Michelle Van Trotsenburg, head of Marketing and Corporate Affairs at ITHUBA, emailed GroundUp to say that she was responding on behalf of Bezuidenhout. The full response can be read here.

“ITHUBA notes the concern surrounding claims regarding how funds may have been misused by peoples or entities involved in the National Lottery ecosystem. These claims have drawn attention to an unrelated new educational campaign promoting the lottery through collaborations with several local influencers. ITHUBA wishes to assure that the campaign does not relate to the abovementioned allegations at all.”

“…ITHUBA has embarked on numerous promotional campaigns, often working with local celebrities, influencers and other people of high standing. These campaigns do not attempt to create narratives that concern the internal operations of the NLC … We wish to assure interested parties that our educational campaigns are only to help highlight the benefits of the National Lottery. We work closely with our collaborators and ensure they are fairly paid for their time and contribution. ITHUBA puts every effort into ensuring we deliver captive, accurate and informative messaging through our media and social media campaigns.”

So what is it that Bezuidenhout was calling “not true”?

Next:  Lottery’s Phillemon Letwaba resigns under a cloud