Young people in Calitzdorp battle to break down apartheid’s barriers 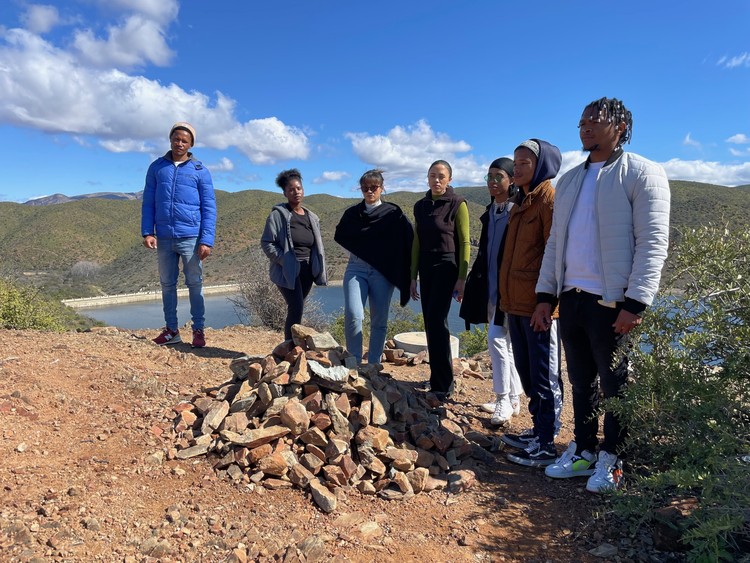 “Ek wil nie arm dood gaan nie” (I don’t want to die poor) was Christopher Tarentaal’s cry during the closing of the Institute for Justice and Reconciliation (IJR) Youth Identity programme in Calitzdorp this week.

IJR has been working with the Calitzdorp community since 2018. The facilitators of the programme, Danièlle Hoffmeester, Nonsindiso Mtimkulu and Jodi Williams, see their role as arming people with the tools they need to get beyond the barriers apartheid South Africa left in neighbourhoods like Bergsig.

Bergsig was created during apartheid for the so-called “Coloured” people of Calitzdorp. The Population Registration Act classified people into Black, “Coloured” and white. Those classified as Black and “Coloured” were removed from areas demarcated for white people under the Group Areas Act.

Also, Black and“Coloured” people received an education that ensured they would form part of the labour force that had to serve white people. This labour force was not supposed to know and attain economic freedom.

Black and “Coloured” people were systematically impoverished to be the servant class of white. Places like the central business district (“die dorp” or the “town”) were off limits to any other racial group. They could not own property and were only allowed in “town” if they were part of the servant class.

“Coloured” people who lived in Calitzdorp “town” were forcefully removed and relocated to Bergsig. Since then, Bergsig has become the site where not only the “Coloured” identity was enforced but also poverty.

This year the Institute for Justice and Reconciliation introduced the Youth Identity project under the leadership of Danièlle Hoffmeester. The project had four dialogues covering topics such as generational trauma, the problematic “Coloured” identity, the history of the town, and leadership. As an outsider, I could see this programme’s impact on the young people in Bergsig.

This past week the final instalment of the programme for 2022 took place. The workshop was over three days, and the venue was packed with young people. These young people were hungry to learn and absorb everything the facilitators taught them. The fourth and final day was a celebration. The programme was packed with performing arts items, keynote addresses, a prize-giving ceremony and traditional games. The whole community got involved and turned up for the final event. What I encountered was a group of young people who are taking responsibility for their lives despite all the obstacles in their way.

Christopher Tarentaal is a local photographer working hard to establish his business. He is also an IJR ambassador.

Kim-Lee Claasen is working at one of the restaurants in “town” and is trying hard to get her driver’s licence. It has been difficult for her because the nearest test centre and licensed instructors are in Oudtshoorn, 55 km away. For every lesson, she has to make a trip to Oudtshoorn.

Eslin Arendse is the coach of the local soccer team, Stonebrokers. He is also in the process of getting a Confederation of African Football-certified coaching licence.

Jo-andri Antonie works at the local school and restarted the local |khâba ra (“rieldans”) group. She has been trying to get into university to become a teacher. So far, she has not been successful. However, this has not stopped her from trying.

It was clear that these young people have agency, and I am sure the staff of IJR (Nonsindiso, Jodi and Danièlle) have something to do with it.

However, there are still many challenges, and many of them are related to a sense of belonging in post-apartheid South Africa. For example, I asked Mocute Grootboom, a young non-binary person, where in Calitzdorp it is safe for a non-binary person. Nowhere, was Mocute’s answer. Mocute does not feel safe in Bergsig or in “town” (“die dorp”). In “town”, Mocute is not welcome because of race and in Bergsig Mocute is not welcome because of sexual orientation.

All the young people I spoke to told me they do not feel at home in “town.” Walking about in town, they are treated like thieves - like they do not belong.

To return to Christopher’s cry at the beginning of this article. Being optimistic with a sense of future when surrounded by hopelessness and poverty is a great challenge. I know this because 20 years ago, Christopher’s cry for help was mine. Every one of my attempts to escape poverty had brought me exactly back to where I started - in a small town where young people are trapped in the lasting structural inequality that apartheid created, and like them, I am terrified of dying poor.