The group says the area “reeks of defecation and urine” 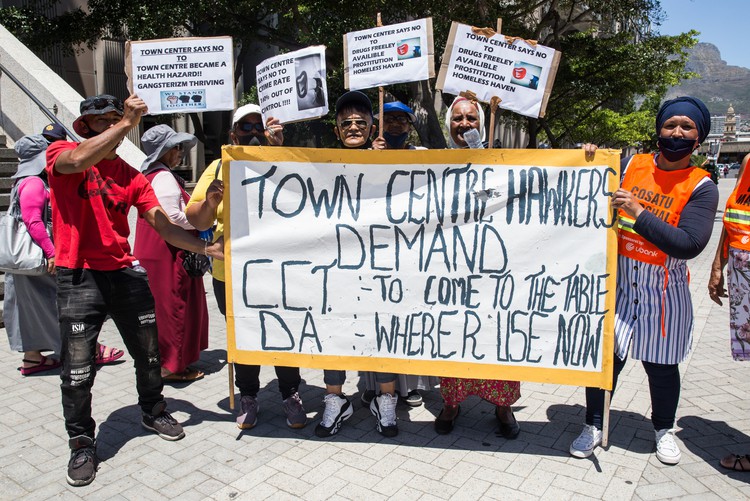 Informal Traders from Mitchells Plain want the City of Cape Town to help improve safety, clean and provide services for those working in the town centre. Photo: Ashraf Hendricks

They handed over a memorandum to the City’s Mayoral Committee Member for Urban Management, Alderman Grant Twigg. The informal traders say their complaints have been falling on deaf ears.

Among their complaints is the lack of involvement by law enforcement, illegal trading, safety, the lack of ablution facilities, and incomplete electricity supply at the Mitchells Plain town centre.

“No attention was given to deep sanitising due to the coronavirus pandemic. Refuse, wet and dry, is still seen strewn around and not removed timeously.” The lack of access to public toilets meant that the town centre reeked of defecation and urine, the memorandum stated.

The traders said more than 500 informal traders worked at the Mitchells Plain’s town centre. Forum members also raised concerns that the area is “overtraded” and they struggled to make money.

Shireen Rowland, convener and Forum secretary, said they were fed up with “being around the table for talks for seven years” without seeing any results. She said that several traders “feel that they are being disrespected” by the lack of involvement by the City to ensure safety in the environment in the face of the Covid-19 pandemic.

“If we continue trading there then we are going to become the new epicentre of Mitchells Plain because there has been no deep cleansing,” Rowland said.

Junaid Isaacs, 45, is a trader at the town centre and has been in the business for more than 30 years. Isaacs said that other traders rely on him to approach gang members in an effort to return their stolen products. He said that illegal trading in the town centre is his biggest concern. “Most of the people here are breadwinners for their household, but now they can’t make as much [money] as they used to.”

Daily criminal activity in the area such as drug-dealing and robberies have turned potential customers away which has negatively affected the traders’ businesses, Isaacs said.

The march was supported by the Western Cape Informal Traders Coalition who said that “their grievances and concerns are no less important than those we all face regardless of where we trade.”

“It is high time this City acknowledges the challenges and difficulties informal traders face, and that the City acts immediately on addressing them,” the group said in its statement.

The City had not responded to GroundUp’s questions by the time of publication. The response will be included when it is received.

Next:  The woman who tried to stop the rot at the Lottery

Previous:  In damning judgment, court calls for Road Accident Fund to be liquidated