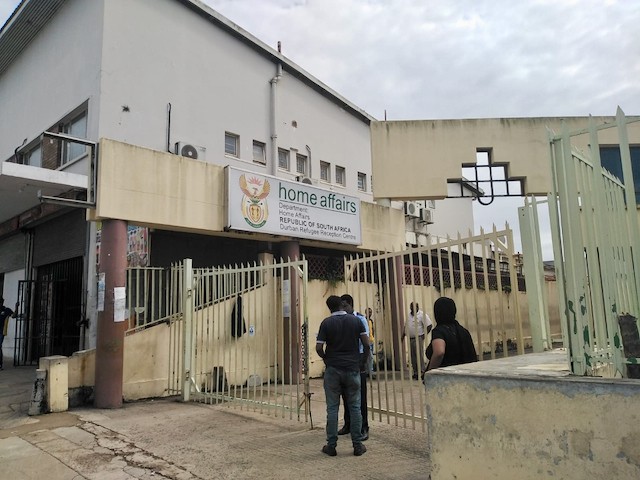 Refugees and asylum seekers want the Home Affairs Refugee Reception Office in Durban to reopen. It has been closed for nearly two years. Photo: Nokulunga Majola

The Africa Solidarity Network (ASONET) is calling for the reopening of Home Affairs Refugee Reception Offices (RROs). The organisation says this will restore hope for refugees and asylum seekers to access the services they are entitled to receive.

The RROs have been shut since the Covid pandemic struck in March 2020.

In May 2021, the department opened an online extension service for those who are eligible. However, many applicants struggle to access or use the online system.

Also, refugees who arrived in South Africa after March 2020 have had no way to apply for asylum status.

ASONET secretary general Daniel Byamungu Dunia says South Africans form long queues without social distancing at Home Affairs offices but Covid is being given as the reason not to serve immigrants.

He said various entities have been running anti-migrant campaigns, such as Put South Africa First, and calling foreign nationals “illegal Immigrants”, whereas the reality is that people are undocumented or in an irregular situation because government has closed its RROs.

“For many years the department has been unable to clear the backlog of refugee status appeals, certification of applications and appeals thereof and, in 2019, had to approach the United Nations High Commissioner for Refugees for help.”

“While Home Affairs is making it impossible for asylum seekers to access RROs, there are forces that emerge and attack immigrants because they are perceived to be in the country without proper documents,” said Dunia.

Melanie from the Democratic Republic of Congo arrived in South Africa towards the end of 2019. She said she was about to apply for asylum for the first time when the offices closed in March 2020.

“I don’t know how to apply online because I have no one to help me. It is difficult if you don’t have papers because you cannot find a job and you cannot walk freely because the police might catch you,” she said.

“I had to leave my country because of warfare. So I need an asylum seeker permit so that I can work and walk around freely like others,” Melanie said.

“I have tons of documents of people who have applied but they have never received feedback from Home Affairs … There are also people who were rejected but they were never given a chance to appeal.”

“Whatever is being done at Home affairs is systemic xenophobia. We have seen many government officials including ministers complaining about foreign nationals not to be employed in South Africa,” said Madel.

Siya Qoza, spokesperson for the Minister of Home Affairs, said: “The department will communicate with relevant stakeholders when it is safe to reopen RROs.”

Next:  Hundreds of learners’ schooling affected by a bad bridge