If poverty and Covid-19 don’t kill you a gunshot will, says PE protester 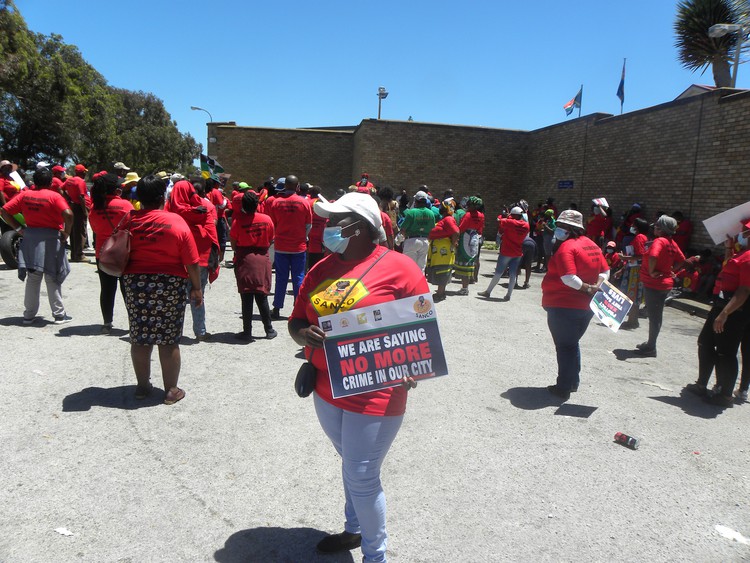 About a hundred residents from Port Elizabeth’s northern communities marched on Friday to the Mount Road police station, over what they say has been a surge in crime.

They later handed over a list of demands to Colonel Lwazi Ntombini of the Nelson Mandela Bay Municipality metro police, and to Brigadier Solani of SAPS.

“We demand that all police stations be resourced. We want complete accessibility to Community Policing Forums and demand the refurbishment of heritage sites. We demand the use of police vans for the purposes of policing and not private jobs and for constant raids at drug hotspots and illegal shebeens,” read the petition.

The protesters also demanded that ambulances, Covid-19 tracing teams and the fire brigade be escorted by police. This follows a number of cases where emergency teams were robbed while on duty in communities.

Khoisan activist Chief Christian Martin said: “The mere fact that residents felt there is a need for a march says a lot. The northern areas are places where if you don’t die from poverty and Covid-19, you will die by being shot at. We must keep the authorities accountable by taking our problems to the streets. Our area resembles a war zone where people move around armed with guns in broad daylight. This should stop.”

Community activist Nontombi Nama said: “We are no longer safe in our homes or outside because of gangsters who shoot recklessly. Where are they getting those guns from and who is giving them money to buy them? We demand tougher sentences on rapists, murderers, and corrupt officials.”

Zukile Kani from SAPS urged residents to report criminal activity to police. “We need information from communities in order for the courts to successfully prosecute criminals.”

“The municipality and councillors play a pivotal role in fighting crime. They should always carry out crime deterrent actions like clearing of bushes, fixing street lights and maintaining abandoned buildings. These are crime hotspots. The municipality should provide playgrounds and recreation parks for children to play,” said Kani.