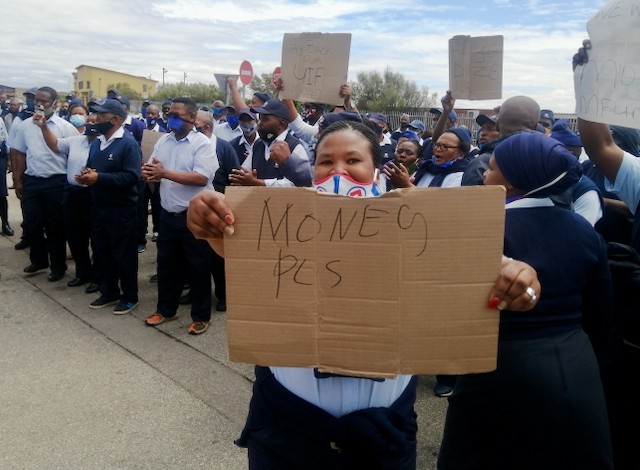 Led by the EFF, the protest started at about 10am, after workers completed their morning shift. The protest comes after failed meetings between the EFF and bus company CEO Sicelo Duze.

NX, a bus driver who asked not to be named, said he had been working at the company for 12 years. He said he had not received his TERS/UIF payment that he believed was due to him and the company had not explained to him why.

The drivers also complained that the company has been slow to implement protective measures on busses against Covid-19.

NX claimed that ten workers at the company had died of Covid-19.

Klaus Heimes, the company human resources manager, without saying a word, accepted the workers’ memorandum from behind closed gates.

Two Department of Labour officials were present to facilitate between the company and the workers, but were not allowed on the company premises.

Anele Madosi, senior inspector from the department, said, “I am disappointed with the treatment we received from Algoa Bus. We were here to intervene. But my right to entrance was violated … Where there is a smoke, there is a fire. We will take your grievances and send them to the senior management for investigation.”

“This whole process of marching could have been avoided if Duze simply took one hour of his time and explained to us as well as his drivers what has happened to the money. We wrote to him on 3 November and again on the 13th after he said he had not received our correspondence. Then we informed him that today we were coming,” said Ngqisha.

Duze said, “I am not in a position to comment until I have met with Department of Labour officials.”

Next:  Langa covered in overflowing sewage and stagnant puddles

Previous:  If poverty and Covid-19 don’t kill you a gunshot will, says PE protester