“I wish the government could allow us to stay here” 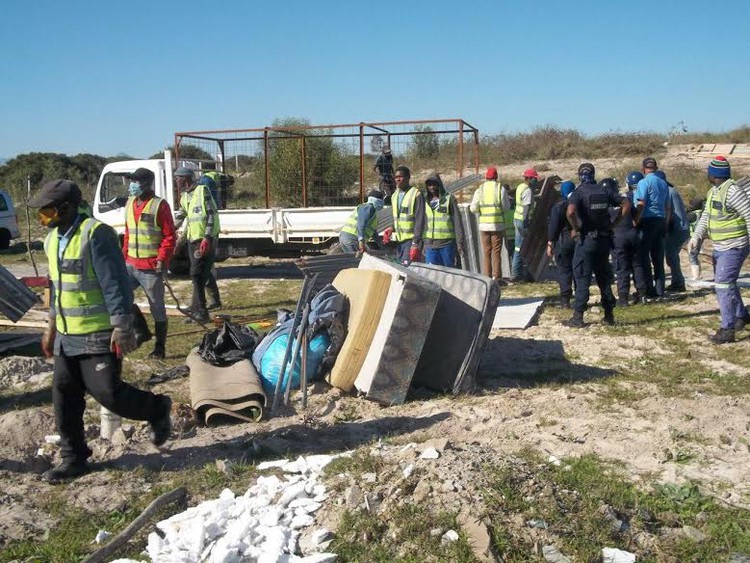 Shacks in a new settlement near the corner of Old Faure Road and Mew Way in Khayelitsha were destroyed on Friday. Photo: Vincent Lali

Nokubonga Tshemu used to sell chicken feet from her shack in Qandu-Qandu informal settlement in Cape Town. When the winter storms came and flooded the ground, her business collapsed.

“The rain water so dammed up in my shack that I and my son could not continue to stay there,” she said. “I could not cook and run my business from a flooded shack, so I stopped selling chicken feet.”

She now survives on her son’s social grant, she said.

Tshemu moved to vacant land near the corner of Old Faure Road and Mew Way in Khayelitsha last week but her shack and others were destroyed by City of Cape Town Law Enforcement officials. On Monday, protesters torched an Eskom vehicle near Mew Way. Eskom responded by withdrawing services to parts of Khayelitsha and Bardale in Mfuleni.

“Eskom fears for the safety of staff after two violent incidents occurred involving the stoning of one vehicle and setting alight of another vehicle in Khayelitsha,” said Eskom spokesperson Trish da Silva. She said Eskom drivers had managed to escape unharmed.

Police are investigating. Western Cape police spokesperson Sergeant Noloyiso Rwexana said: “Cases of public violence and malicious damage to property are under investigation following the protest action in Khayelitsha where a bus was damaged and an Eskom vehicle torched.”

The big piece of vacant land has been occupied since Thursday last week by families from Mfuleni, Khayelitsha and other townships and nearby informal settlements such as Madiba Square and Taiwan.

Those staying nearby walked down Mew Way carrying planks, spades, forks, rakes and hammers in their hands. Those from further away came in bakkies and trucks loaded with building materials and their belongings. They marked out their plots, burned bushes and removed grass and trees to prepare the land for their shacks. Each time the officials demolished their shacks, the shack dwellers stoned cars and Golden Arrow buses on Mew Way and nearby streets.

“The domestic worker doesn’t work anymore, so she no longer hires me to clean her place while she is at work,” Mtutu said. As a result she could no longer afford the R450 a month in rent and the family decided to move.

Mtutu said: “We now sleep without eating supper. I have never even received food parcels. “I wish the government could allow us to stay here so that I could use my kids’ social grant to buy them food and clothes.” 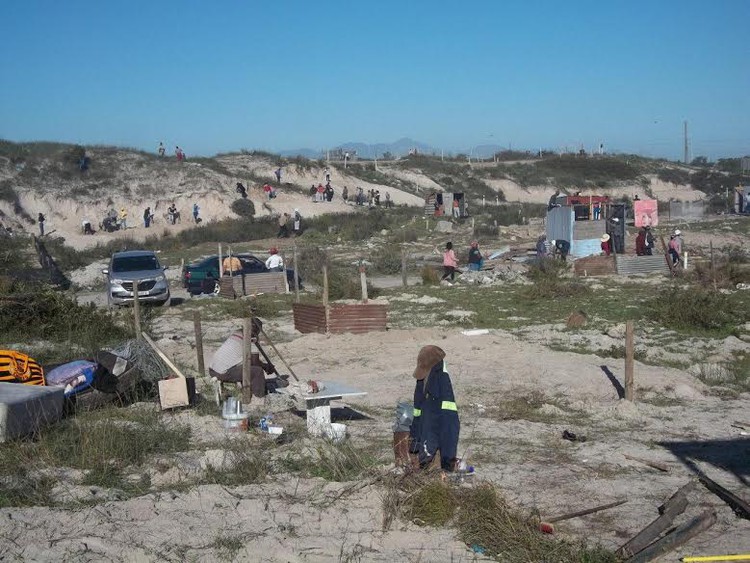 By Sunday, people were rebuilding their shacks. Photo: Vincent Lali

“The City, together with law enforcement agencies, is doing its best to thwart the attempts but it is mostly large-scale, well-planned, well-funded and orchestrated invasions,” he said.

Booi said: “Actions to prevent the invasions or illegal occupations are also being met in some areas with extreme violence and destruction of property and the breaking down of community facilities.”

Standing beside her rebuilt shack on Monday, Tshemu said, “I will sleep here tonight.”

Previous:  Prisoners at Brandvlei starved of water when pump failed