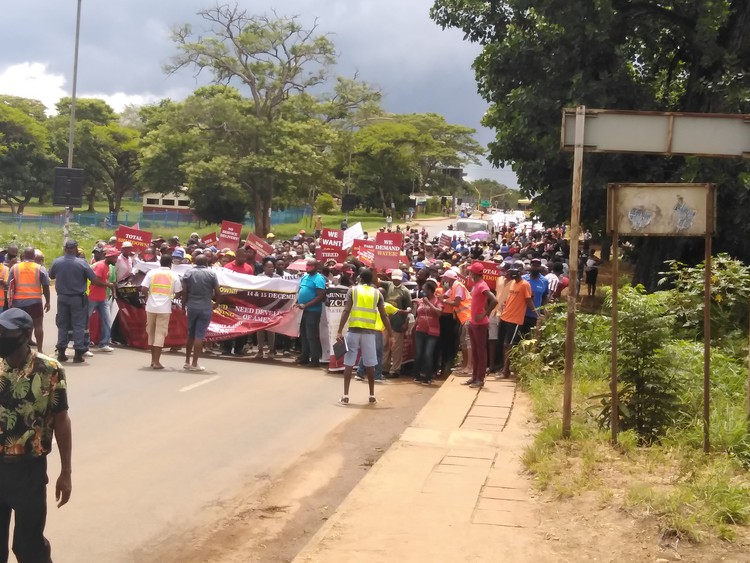 Many people bussed in from Madombidzha, about 15km outside Louis Trichardt. The protesters sang. Some waved placards reading: “Tired of constant electricity interruptions and potholes, we want better roads”, “We demand water” and “We are tired of being taken for granted”.

The protesters demanded a regular supply of clean water, that sewage be fixed timeously and an end to power outages in the Makhado district. They also took issue with the poor conditions of roads across the town as well as infrastructure.

As they marched along Songozwi Street, vendors and stores along the route quickly closed. One vendor, who asked that her name not be published, said she was afraid the march would turn violent. But it didn’t.

The protest was organised by the Zoutpansberg Community Development Forum (ZCDF) an organisation fighting for the rights of communities.

“We have come here to formally raise our grievances with the government so that they can begin to seriously attend to our issues. On Sunday we lost lives on [on a road]. We believe it is because of the state of the roads. We would like the government to intervene immediately,” said Patrick Sikhutshi, ZCDF chairperson. He said that the Forum has for a long time been interacting with the local government but nothing fruitful has come of it.

Tshilidzi Maraga from Tshiozwi village said she was worried about the inconsistent water supply in her area. She said she has to buy water from other community members who drilled their own boreholes.

“I have a big family (of seven) and it becomes very costly to buy water every time. A 20 litre container of water is R5 and I use about four or five of those per day. This is really a serious issue since I am unemployed,” said Maraga.

The group handed over a memorandum which was signed by councillor Thina Mbedzi, from the Vhembe District Municipality and councillor Lindiwe Mogale from the Makhado municipality.

After signing the memorandum Mbedzi promised that the Vhembe District (which is the water authority in Vhembe) will attend to all water grievances. She said the district has plans to solve the water challenges and that all boreholes not functioning will be restored soon.

Next:  Puppets bring together a town divided by apartheid