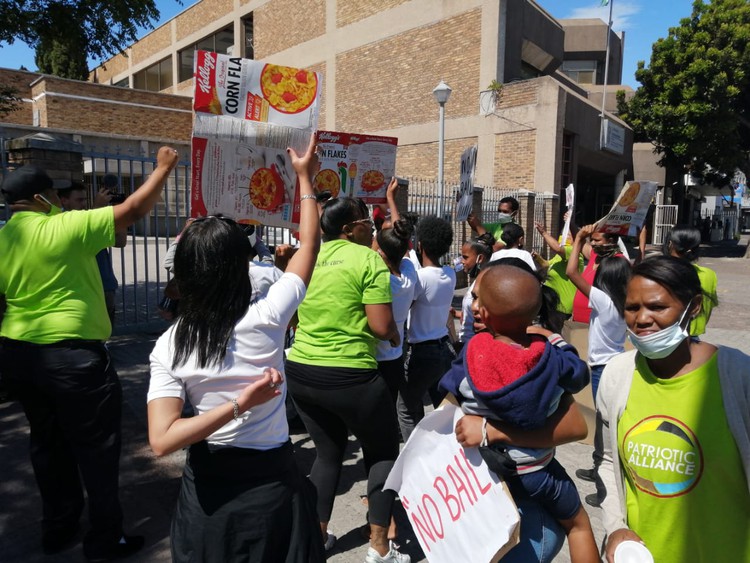 Hanover Park residents protesting outside the Athlone Magistrates Court on Monday where two police officers appeared for the fatal shooting of Marlon Fuller on 5 December. Photo: Supplied by Albert Matthews

Two police officers appeared in the Athlone Magistrates Court on Monday for the fatal shooting of a Hanover Park father on 5 December.

Marlon Fuller, 38, an armed response officer from Hanover Park, was allegedly shot by police officers in the early morning. Fuller was buried on Saturday and is survived by his wife Sharon, their three children aged nine, 19 and 22, and two grandchildren.

According to eyewitnesses, Fuller and a few community members were standing outside Cascade Court, where he lives, when the police arrived. “They (police) just said I must lay flat, then they took out a gun and shot him in his stomach,” said one of the witnesses.

It is believed that the police officers did not phone the ambulance. The witness said Fuller was taken to Heideveld hospital by another resident, where he later died.

On Monday community members gathered outside the court to demand that the accused not be granted bail. One of the accused, Eugene Jones, was released on R800 bail and the second accused will remain in custody until their appearance in court next Monday (we cannot name the co-accused until he pleads). Jones is a reservist from Philippi SAPS while his co-accused is from Athlone SAPS, said Kashiefa Mohammed, Hanover Park Community Policing Forum spokesperson. Both the suspects are from Hanover Park.

According to Sontaga Seisa, IPID’s acting national spokesperson, two police suspects were arrested by IPID investigators on Sunday. “Further comment on the investigation will be shared once the investigators have engaged with the National Prosecuting Authority,” he said.

But community worker Albert Matthews of the First Community Resource Centre fears that Fuller’s shooting in the area could cause a flare up in violence and renewed distrust towards the police.

“The community of Hanover Park is upset by this incident. Everyone knows about [Fuller] and we can vouch that he was a guy that really did a lot for the community,” said Matthews.

Fuller’s shooting may not be an isolated incident; complaints against police officers increased by 32% during lockdown, according to a statement by the Institute for Security Studies (ISS) on 12 October.

A total of 5,640 cases were reported to IPID during the reporting period of 2019/20. Of these, 3,820 were assault cases, 684 were cases of complaints of discharge of an officer’s firearm, 392 were for deaths as a result of police action and 237 for deaths in police custody, according to the IPID annual report for 2019/20.

According to Matthews, there was no conflict or hostility prior to Fuller’s shooting.

“This is not normal. [It] is not acceptable for any person to be shot in that manner for not doing anything, for just standing on the corner,” he said. “This violence spills over to young people. We want to prevent that from happening but we can only do this if justice is being served.”

Next:  Hundreds march in Louis Trichardt to demand water, sanitation and proper roads