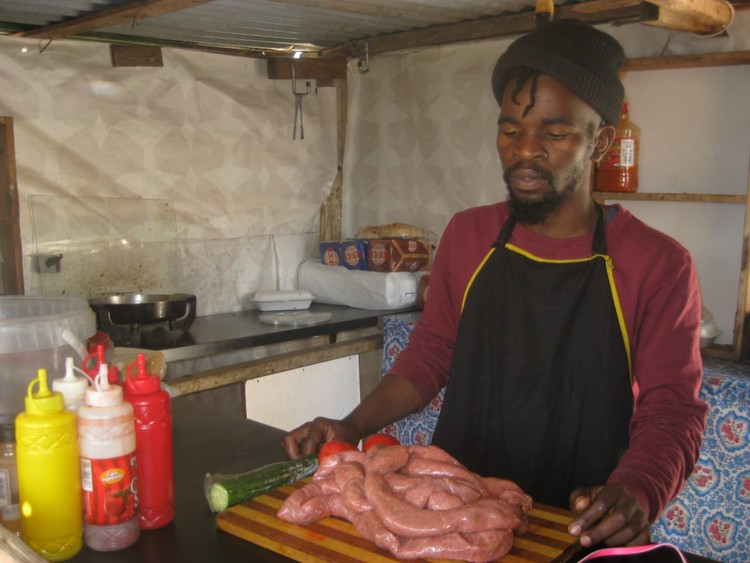 Lindokuhle Msomi from KwaMashu in Durban preparing a meal in the fast food stall he started after losing his job as an artist during lockdown last year. He says he was able to open his stall with the R350 Covid-19 grant he had been getting for nine months. Photo: Nokulunga Majola

At the start of the Covid-19 lockdown last year, 27-year-old Lindokuhle Msomi was among millions of people who lost their income due to the imposed restrictions.

Msomi says he was among “the lucky ones” to have received the monthly Social Relief of Distress (SRD) grant of R350 until it was terminated at the end of April 2021. The grant was introduced in May 2020 to assist millions of people who were unemployed, and who were not receiving any form of income, social grant or UIF payments.

Msomi, who lives at the KwaMashu Hostel in Durban, previously worked as a script writer and videographer but lost all prospects of supporting his family when the industry remained closed for months.

“There haven’t been many events which means there is not a lot of work for us. We are struggling to make ends meet. During lockdown, my father was not working, so the little I got from the [SRD] grant I was able to help out where I could at home,” says Msomi, who is also one of three siblings.

Since August last year, he has to date received a total of over R3,000. With this money, he was able to start buying and selling items in the community until he had saved up enough money to open his fast food stall.

“I don’t pay rent, but I had to take care of myself and my son. When I started, I was selling little things like cigarettes, chips and sweets but it wasn’t making any profit so I decided to look for something that can bring in money for me to survive,” says Msomi.

After scouting out a vacant space near his home, Msomi says he collected old poles and lumber to build his shop. “When I first got the money, there were a lot of things I wanted to do. R350 might seem like small change but believe me, it’s enough for a person who has nothing.”

“I’m proud to say I started this business with the R350 SRD grant. There is still a long way to go because at the moment I am not making a lot of profit due to limited stock [because he does not have a fridge] but I am surviving,” says Msomi.

“We don’t know when this pandemic will end and in the meantime, how many people will lose their jobs? Even if I don’t make a lot of profit, I always go to bed full and I am grateful for that,” says Msomi.

Meanwhile, the Black Sash and other members of the #PayTheGrants campaign are calling on the government to extend the grant, on which more than 6 million people depended. Despite letters by the campaign, they have yet to receive a substantial response to written requests to the Presidency, the South African Social Security Agency (SASSA), the Ministry of Social Development and the National Treasury on the extension of the grant.

In a recent statement, the Black Sash reiterated its demand for “the immediate reinstatement of the Covid-19 SRD Grant until permanent Basic Income Support” is phased in for those aged 18 to 59.

“The value of the grant must be increased to the Food Poverty Line (which is at R585), given the escalating costs of food, transport and electricity. The eligibility criteria for this grant must also be expanded to include unemployed women who receive the Child Support Grant on behalf of their children.”