“I’m happy that we were also counted and the government sees that we also matter,” says Durban homeless man 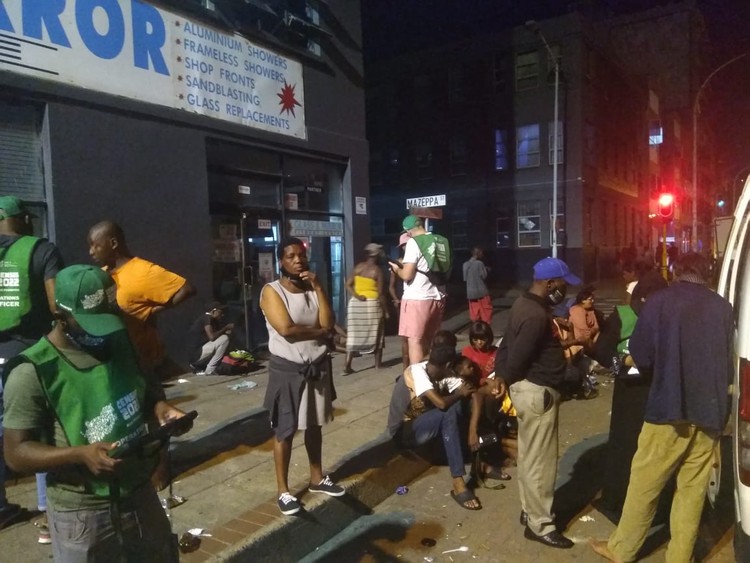 Stats SA in partnership with the Denis Hurley Centre counted homeless people on the streets and in shelters in Durban on the first day of Census 2022 last week. Photo supplied

Hundreds of people living on the streets of Durban have been counted and surveyed to mark the start of the national census last week.

The count was done by Statistics South Africa (Stats SA) volunteers in partnership with the Denis Hurley Centre, which, among other things, provides services to homeless people in inner city Durban. According to centre director Raymond Perrier, they prepared a map for Stats SA, identifying homeless shelters and hotspots of where most homeless people congregate at night.

Perrier said that Stats SA had admitted to the National Homeless Network that the homeless population was likely under-counted in previous censuses. “Stats SA is not expected to know the whereabouts of homeless people, how to approach them, how to build trust, or how many are likely to be in shelters or on the streets. So they approached us for help,” Perrier said.

Perrier said they went out with 30 homeless volunteers from the Denis Hurley Centre and 220 counters from Stats SA on Wednesday night. Separated into ten groups, they counted people in different parts of the City previously identified by the centre. “The counters had already been trained in how to speak to homeless people and they went out with a clearly articulated map. This was reasonably successful, except that we probably only counted 50% of the community. A dry run would have shown that twice the level of resources were needed to count everyone in one night,” Perrier said.

He said he was on the team that went to the Durban beachfront by the Addington Hospital where they met about 35 people sleeping there. Of this group, only 28 people agreed to be interviewed.

At shelters, managers assisted Census staff with headcount numbers for the night because everyone could not be interviewed, Perrier said.

“I was moved by how the homeless people were very comfortable talking to the counters. Despite the loadshedding and no police visibility, the night was a success and there were no incidents,” Perrier said.

One of the homeless volunteers, Blessing Mkhwanazi, said being part of the Census made him feel included. “We spoke to others living on the streets about why it is important to get counted and that it was okay to give their information,” said Mkhwanazi.

Thandazani Lukhozi, who lives on the streets in South Beach, said, “When you are homeless, you are not regarded as a member of the society but everybody looks down on you. I’m happy that we were also counted and the government sees that we also matter.”

Meanwhile, Chairperson of the Parliamentary Portfolio Committee on Public Service and Administration Tyotyo James has urged people to participate in the 2022 Census. “By completing the census questionnaire, the government will ensure that every community has the information needed to plan for services that support employment, schools, public transport and hospitals,” said James.

This will also be the first digital census, and 165,000 fieldworkers will be deployed to count everyone in South Africa.

“Census 2022 comes at a time when the world is reeling from the aftermath of Covid-19 which makes the need for statistical data on our population and their living conditions more urgent than ever,” said Thembi Siwela, deputy minister in the presidency in a statement last week.