The fire gutted 11 shacks in Gugulethu 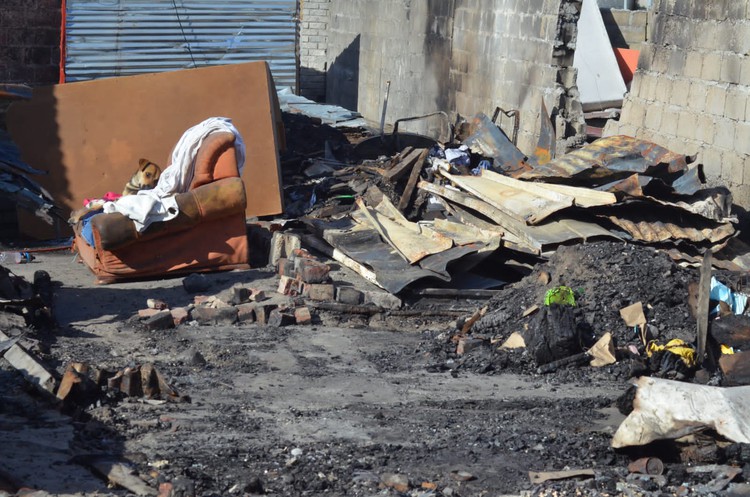 Residents of NY6 Gugulethu, Cape Town, started clearing and sorting through charred belongings on Monday after a fire killed two young brothers and destroyed ten other shacks in the early hours of Sunday. Photo: Nombulelo Damba-Hendrik

Two young brothers died while asleep in their shack that caught alight along with ten neighbouring homes in NY6, Gugulethu in Cape Town on Sunday morning.

The bodies of Yamkela, ten-months-old, and Thandile, aged three, were recovered from the fire’s debris on Sunday, after firefighters doused the blaze just before 3am. The City’s Fire and Rescue Service spokesperson Jermaine Carelse confirmed the incident in Gasela Street.

The siblings’ mother Anathi Manunga said they were all asleep together when the fire started. She said she had rushed out to call for help from her neighbour but when she returned to her home, the shack was already in flames. The mother’s seven-year-old was with a relative at the time.

“I could not get in and I don’t know why I did not think of taking my children outside first. I only thought about getting water to extinguish the fire,” said the grieving mother.

“My children are gone. I lost everything. I’m not working and I don’t even know how I’m going to bury them. Other people lost their shacks and belongings because of this fire,” Manunga told GroundUp tearfully.

She said it is unclear how the fire started because she is certain the candle they used for lighting was put out when they went to bed that night.

Her aunt, Boniswa Manunga, who also lives a few doors away recalled hearing her niece shouting for assistance. “I went out to check what was happening. When I opened the door the fire was already too much. I ran outside leaving a disabled child in bed,” she said.

“I only remembered the child a few minutes later. I rushed back to the house and the fire was already starting from the window. I thank God that we managed to save him,” she said

Resident Victor Thunyane said he lost everything in a fire. “One minute I heard people shouting asking for water. When I rushed outside the fire was starting to burn my shack. I could not save anything,” he said.

Boniswa Manunga said the family would meet to discuss how to pay for the children’s burial because the mother is not able to. “We do not know when or how we are going to bury them as we do not have money,” she said.

The matter has been referred to SAPS to investigate.