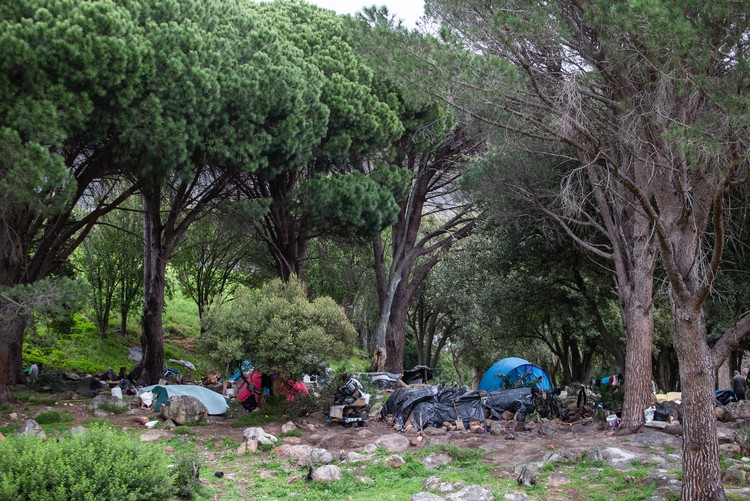 This is where a group of homeless people used to live, in Van Riebeeck Park in Cape Town. Photos: Ashraf Hendricks 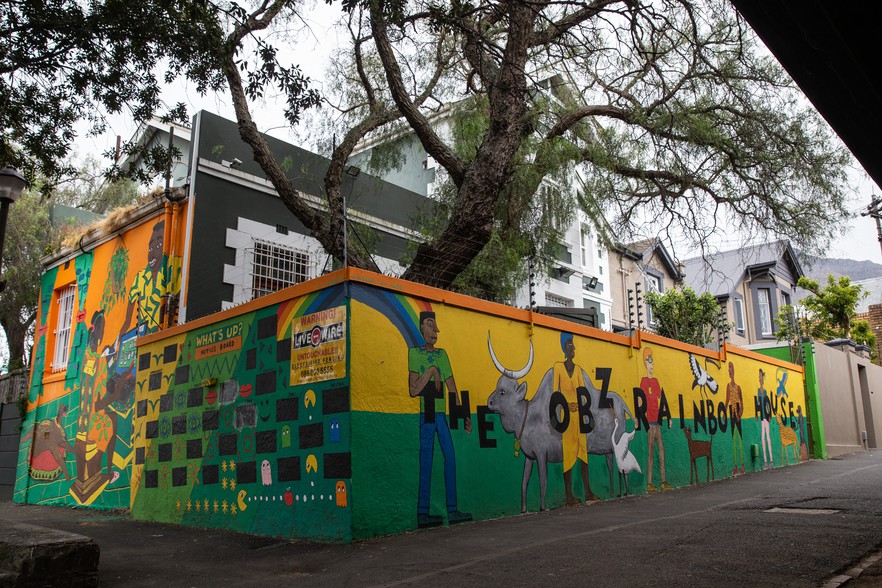 And this is where they live now, at least for the moment.

For the first time in years, Marlene Hendricks is waking up in a home with a hot shower, hot food and a room of her own. Hendricks is one of 15 homeless people who have been moved from Van Riebeeck Park in Vredehoek, Cape Town, to a house in Observatory, called Rainbow House, run by a housing collective.

Hendricks and the others were moved at the beginning of the month, just as the City of Cape Town’s Law Enforcement officers had arrived to take action against them.

The move is a result of cooperation between an organisation called the Rehoming Collective, a security company called Special Ops, and a few residents of Vredehoek. Three residents contributed R30,000 according to Gary Anstey, the chair of the Friends of Van Riebeeck Park, an association that aims to upgrade and maintain the park.

The cost per resident at Rainbow House is R1,800 per month. So no one knows how long the new residents will be able to stay there.

Managing Director of the Rehoming Collective Carlos Filipe Mesquita said he had been alerted to the situation by the director of Special Ops, the company being paid by some Vredehoek residents to monitor the park. Mesquita said that on Sunday, 3 October, the company’s director contacted him, telling him that Law Enforcement officers would be arriving the next day to remove the homeless people.

“I take anyone seriously that says the words law enforcement,” said Mesquita, who was once homeless himself. In 2020 he was removed from Van Riebeeck Park to the Strandfontein Homeless relocation camp.

Mesquita said that Law Enforcement officers were there “en masse” when he arrived on Monday.

He decided to move the people in the park to one of the collective’s houses in Observatory. “I did it out of desperation for these guys because they were about to get thrown out,” he says. Two weeks previously, Law Enforcement officers had confiscated tents of those living in Van Riebeeck Park.

Caylin Dicks, the director of Special Ops, said that he had worked in many areas where his company “came in with a bang and cleaned it up”, but he never felt good about it. So this time he wanted to approach it differently. “I saw a way to help and solve a problem,” said Dicks.

Dicks said that the security company had been in the park for four months and the more time he spent there, the more he started to like those staying there. Dicks said that he too had been homeless 17 years ago.

Rainbow House can accommodate 24 people. “I feel relieved and safe,” says Hendricks. She hopes she can now go ahead and achieve her goals. “I would like to become a nurse one day and to help the needy.”

Ziggy Goredema, also from the park, says that he hasn’t felt this way in quite some time. “I’m trying to consider the fact that I am under a roof and it’s comfortable and overflowing with kindness”.

Since he is still with the same people, he says the place feels “homely”.

Goredema, who is from Zimbabwe, creates lamps. He has been given a place to work at Rainbow House and hopes that in Observatory he will find a better market for his lamps. 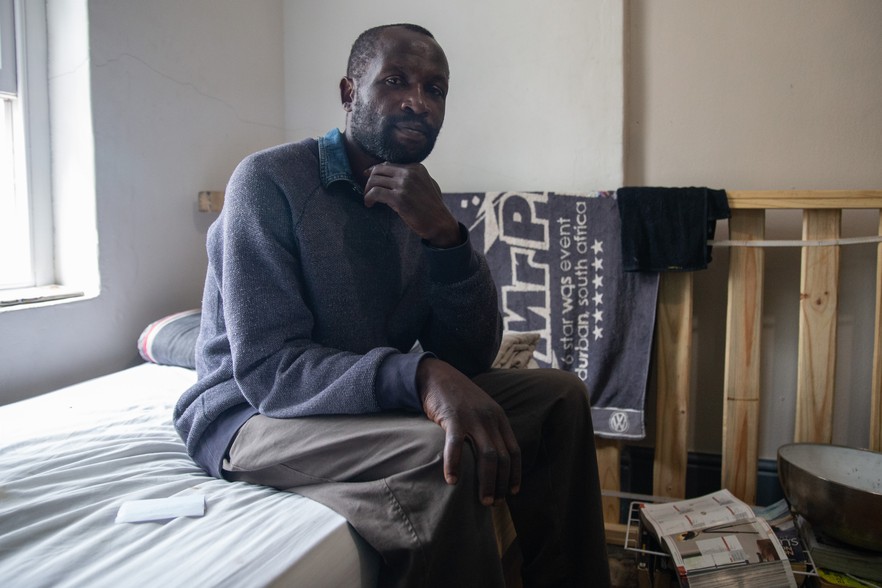 Ziggy Goredema says that living under a roof makes him feel he has been given another chance.

Anstey and Mesquita said the move was made without any assistance from the City.

The new residents are currently being helped by Streetscapes to get IDs and search for work.

“It’s been a really hard process, that has thus far been mainly driven by a couple of neighbours in the area,” said Anstey. “We can’t yet give a commitment for funding. We’re doing what we can to mobilise the community. So far all we’ve got is payment until the end of October. But I think we’ll get there; it is the right model.”

He said the initiative was not linked to the Friends of Van Riebeeck Park or the local neighbourhood watch, but had been taken by “a group of people who feel that the City, distinguished by their absence, have made millions of promises and are delivering absolutely nothing. Meanwhile our quality of life, safety and investment in homes are at risk.”

He said residents of houses near the park no longer “felt safe” after what he said were incidents involving “gunshots, stabbings, unnatural deaths, and fires every night”. A group of them had decided to employ Special Ops security services to patrol the area in June. The security guards are currently operating on a month-to-month basis, and will continue patrolling the park, Anstey said.

“We engaged in the services of a security company to gather information on what was happening at the park because it was completely unmanaged. Homelessness is a complex issue. There are people who find themselves without shelter, and are living with little dignity wherever they can. And on the other hand, there’s a lot of [criminal] activities.

“The key moment was when Carlos said that if we can get them accommodation outside the park, they’d be willing to have it.”

“Now the battle is to ensure that we find sustainable funding, and talk to other organisations working in the space, to look at what funding proposals there are. It’s really the beginning of a journey which, if it works, will be a model. But it’s going to take a lot of work and a lot of people,” Anstey said

“It will become more sustainable as we go out into the community, knock on doors to gain support, and help the community understand the link between having a clean park, and assisting those who have been relocated.”

“For the moment, we’ve only got one month in the bag, but we’re actively working towards covering month two.” 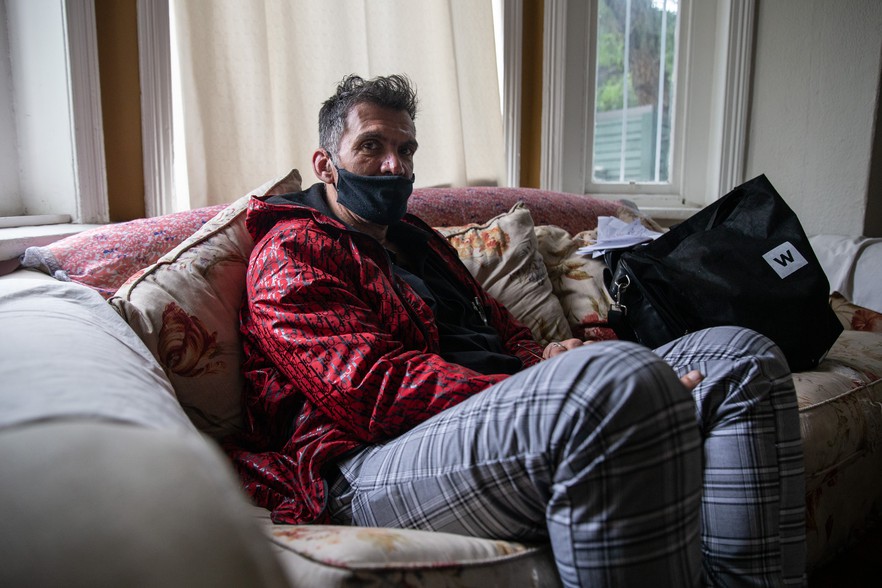 Mesquita says he is grateful that there is money for now, but worried about the future. “People might be happy now that [the homeless people] are moved from the park, and they see the pictures online of them doing well at the house. But people tend to forget quickly. In a month or two’s time, nobody might care and those at the facility might be forgotten, and then who must look after them? That’s what I’m worried about - the continuity. We don’t want them to end up back on the streets.”

For now, the plan is to involve additional organisations and also to call on the public to donate food and clothing, Mesquita said.