Minister says the problem is being addressed 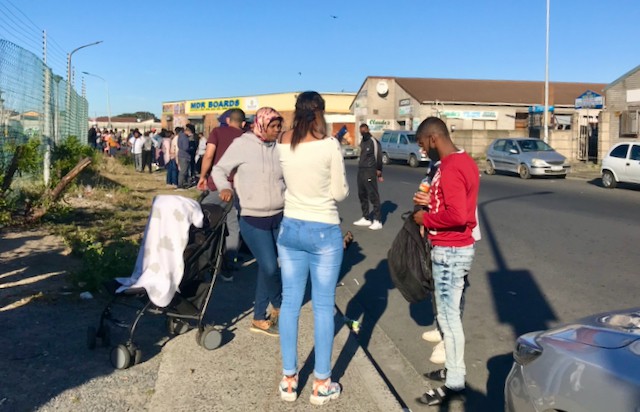 Minister Aaron Motsoaledi has responded to frustrated citizens who are queueing outside Home Affairs’ offices long before dawn, and even then they might not be served. The need for IDs as the local government elections loom and also the school holidays has added demand. Meanwhile the department has been reducing active staff due to Covid mitigation measures.

Wendy, from Lakeside, did not want to give her full name. She described the ordeal she had to undergo to renew her passport. She had to make three trips to Wynberg Home Affairs.

Her first trip was on 27 September. At 6am, the security guard told her that all the tickets for the number of people to be served that day had already been issued.

She returned, this time at 4:30am. At about 7am, an official told the queue that the 80-ticket allocation for the day had already been issued.

Wendy’s husband then went to Home Affairs to make an appointment, but he was told services were fully booked.

“At about 7am, we were issued some tickets, but the official said, ‘You are not number two because there are 20 people who were not served yesterday.’ They took us down to the basement where we waited until the offices opened at 8am. At 10am I was given another number to go for biometrics. Before I left at 1pm, I noticed that there were 12 counters but only two people serving and there was only one cashier,” she said.

On Wednesday, GroundUp went to the Mitchells Plain Home Affairs office. We met eight-months-pregnant Marcha Micheals from Montrose farm. She was second in line, because she had arrived at 2am. “I came here last month around 10am and it was too full. Security said 100 people were given tickets, so I returned today [20 October]. We have been waiting here outside the gate since 2am. It was dark and very cold. It is also dangerous, but what more can we do? I need a [temporary] ID to collect the R350 grant, and return here to collect the original ID. That will cost R140 [in transport]. I also need an ID for voting.”

She said there were no toilets for people standing in the queue.

When GroundUp arrived at the Wynberg office at 5:45am on Wednesday, there was already a long line of people against the wall of the mall along Main Road all the way to the traffic lights on the Wetton Road corner.

At 6:25am, an official started screening the queue.

We proceeded to the Mitchells Plain offices, arriving at 6:40am. The queue was even longer than Wynberg. Women with children sat on the pavement. Elderly people, exhausted from standing, told the person either in front or immediately behind them to keep their place while they went to sit in their cars.

People listed the problems with Home Affairs: the computer system crashing or going offline, the office being understaffed, a lack of communication and a service backlog.

He visited the Mitchells Plain office on Tuesday and spoke to people in the queue. He said people had come from Nyanga, Khayelitsha and Philippi to Mitchells Plain in the hope of getting served because their local offices’ IT systems were more often off than online.

In a statement on Monday, Motsoaledi said the department has approved a temporary extension of operating times by two and a half hours at front offices, from 8am to 5:30pm to deal with the high demand.

Out of 412 offices, 197 are modernised to be be Live Capture offices that can process smart ID cards and passports. “These are the offices that will operate for extended hours because that is where the high demand is being experienced,” he said.

Motsoaledi admitted that many complaints had been received from irate citizens across the country. He also said senior managers will visit offices unannounced to monitor operations on the ground.

“Most of these people have complained about a bad practice by some Home Affairs offices where queues are cut and people sent home, presumably because there are already more than enough people to serve for the day.

“We learnt that this wrong practice of sending people home can happen as early as 7am. The only people who will be sent home are those who arrive after 5:30pm. Everybody who arrives before 5:30pm should be served and not turned away.”

He said the temporary extension is only meant to resolve congestion at the identified offices which increased over the last two weeks and this intervention will be supported by a full return of staff in all offices.

“In the unfortunate event of the system being offline, we will ensure quick intervention and we appeal to members of the public to understand because this is something beyond our control,” said the minister.

Next:  Equipment worth more than R6 million stolen from technical school in Gqeberha

Previous:  Undocumented people can now get Covid vaccines - in some areas

On top of all the issues already mentioned, at the Nyanga office where I was a few weeks ago, a group of men who have made it their jobs to wake up early in the morning to stand in the queue and ‘sell’ their spots to desperate people for R50 (minimum). They are not ashamed of pushing 5-10 people at the front of the queue for that fee and claim they were queuing for them and the officials can’t do much as long as the people don’t speak up to stop this criminal behaviour. They are said to walk away with about R400 everyday from this disgusting practice.

Desperate to earn and provide for our families

I admit there are those securing and selling places in the Home Affairs lines that cause more chaos every day. But then there are those people like myself who are unemployed, over the age of 40 and struggling to survive and provide for our families.
We sacrifice our time and spend the entire night outside on the street, at the risk of being raped, robbed, or even killed just to put food on the table.

We are just trying to survive and not doing anything illegal. If Home Affairs can just place security to monitor and keep one person spot it will be a great help instead of punishing everybody and denying them the right to earn and provide for their families.