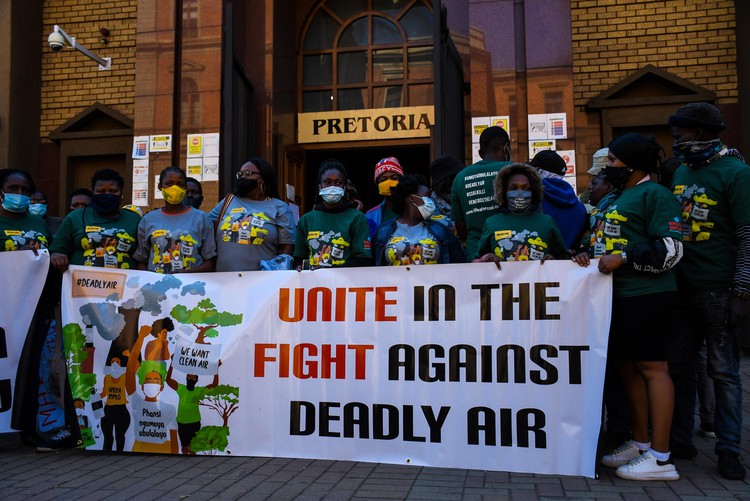 Supporters of the applicants’ case protested outside the Pretoria High Court on Monday. Photo: Julia Evans

The air quality in the Mpumalanga Highveld can’t be purified overnight after over 50 years of pollution. But more environmental regulations will not fix the problem either, a legal representative of environment minister Barbara Creecy said in court on Tuesday.

This was the final day of proceedings in the “Deadly Air” case in the Pretoria High Court.

Two environmental justice organisations, groundWork and Vukani Environmental Justice Movement in Action (VEJMA), argued on Monday that the court should order the minister to implement and enforce regulations to fix the toxic levels of air pollution in the Mpumalanga Highveld.

The two organisations argued that the poor quality of air is a violation of section 24 of the Constitution, which states that everyone has the right “to an environment that is not harmful to their health or wellbeing”.

Judgment was reserved at the end of court on Tuesday by Judge Colleen Collis.

Mpumalanga was ranked as one of the world’s worst hotspots for nitrogen dioxide and sulphur dioxide emissions in 2019. It is home to 12 of Eskom’s coal-fired stations and two refineries. According to a 2019 assessment by the department, about 10,000 people die each year as a result of the air pollution.

On Tuesday advocate Marius Oosthuizen argued that the section 24 right is “progressively realisable” and can’t be rectified overnight, as the applicants in the matter have suggested.

Noting that the Highveld air problem was 50 years in the making, Oosthuizen asked: “Can we now say that the state is under an obligation immediately realisable – here and now? When we wake up tomorrow morning, the air quality in the Highveld must be clean?”

Oosthuizen also said that the argument that the minister has failed to deal with the problem is wrong and that there have been improvements since 2007, when Mpumalanga was first identified as a priority area under the Air Quality Act.

The Green Scorpions have done numerous inspections at facilities in Mpumalanga since 2012 to monitor compliance with the national environmental standards.

“From those inspections, they identified certain transgressions, and they followed it up,” said Oosthuizen. Several compliance notices were issued and the department also instigated two criminal investigations into companies not complying with the standards (for more about these inspections read here).

In his response for the applicants, advocate Steven Budlender said that while there has been some improvement, the department’s own study acknowledges that these improvements have not been adequate.

Budlender also said that the minister has offered no solution to the court.

“There is no suggestion from the minister at all as to when the standards in the Highveld area will eventually be met,” said Budlender. The study reads that “communities are at high risk of acute and chronic health effects due to exposure to [nitrogen dioxide and sulphur dioxide]”.

Budlender said that the department’s own assessment of the impact of the pollution has indicated that environmental regulations enforced by the minister are necessary.

Read our previous report which describes the Applicants’ arguments.

Next:  Yes, Minister Cele, we did do our homework