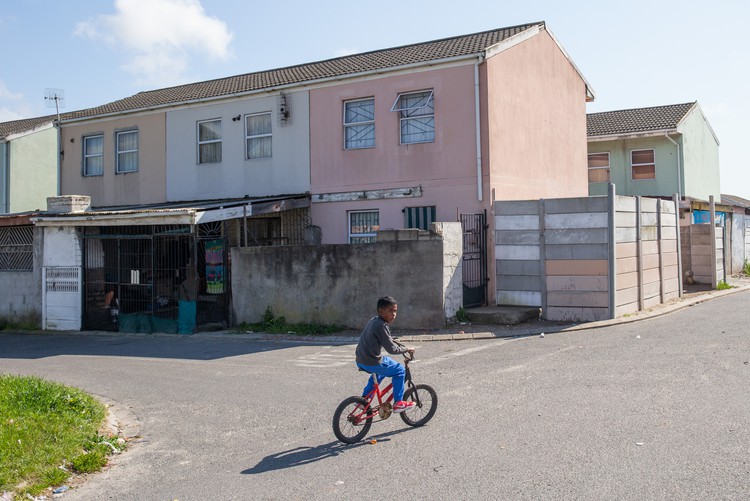 Families that have paid off their state-subsidised homes in Newfields Village, Hanover Park, want to know why it is taking so long for them to get their title deeds. Photo: Ashraf Hendricks

Densely built with hundreds of two-storey houses, Newfields Village in Hanover Park on the Cape Flats is a state-subsidised housing complex. About 400 families live here.

Aimed at providing houses to low-income households, state subsidies reduce the purchase price of the houses. But many residents say that despite having paid off their homes, they are struggling to get their title deeds.

Gary Hartzenberg, chairperson of the Newfields Village Community Representative Forum, received his title deed in January 2020. But more than half the households still haven’t received title deeds, he said. “If they provided mine, why not people who were paid up before me?”

Rashad Boer said he has been waiting for a title deed for nearly five years now. He needs the title deed because he wants to sell.

Beverly Madien has been waiting 18 months.

Edwyn Calvert said he too has been waiting for his title deed for 18 months. The delay forced him to stop renovations to his home, leaving him with an extension without a roof or windows.

According to Calvert, when he initially asked the Cape Town Community Housing Company (CTCHC) for his title deed, he was told he must first settle a water bill of nearly R4,000. He enquired at the Civic Centre, where the municipality told him he does not owe anything.

Boer, Calvert and Madien have been living in their homes for about 20 years.

The matter was heard in the Constitutional Court, which ruled in favour of 12 residents. The court decided that cancellation of the instalment sale agreements would be unlawful. The judgment can be read here.

The court heard that when some residents first moved in, they discovered their houses were badly built and they had to fork out money for maintenance. Their instalments were also higher than expected.

The CTCHC was found to have “had extremely poor accounting and record-keeping practices making it onerous for the applicants [the residents] to calculate the outstanding amounts”.

CTCHC only recorded the instalment sale agreements in 2014, more than ten years after the agreements were made and the residents moved into their homes.

Both Hartzenberg and Calvert said that after the court judgment they were refunded what they had overpaid on their houses.

David Masimila, general manager at CTCHC, who has been dealing with Newfields residents’ complaints, told GroundUp that it could “only discuss personal issues with the account holder”.

He said the “wheels are turning slower” due to the Covid-19 pandemic. “We are dealing with clients on an individual basis and are responding to individual queries.”

Next:  Poor policing blamed as vigilantes face justice in Mdantsane