GroundUp sued by Iqbal Survé … but for only R5-million

Independent Newspapers has a litigation fixation 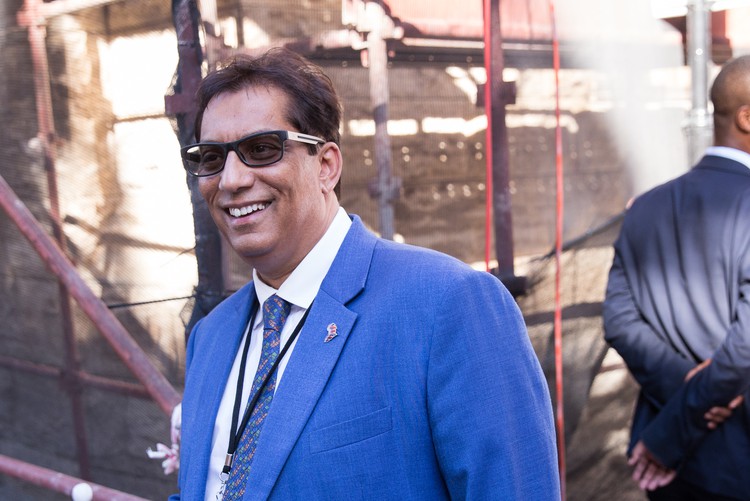 Survé is claiming damage to his reputation following the publication of our editorial: Iqbal Survé’s newspapers take the side of the Lottery crooks.

We subsequently published, in full, an energetic response to this editorial by Aziz Hartley, the Editor-in-Chief of Independent Media. Nevertheless, Survé served us with papers and we now join a comically large club of publishers and journalists who have been served or threatened with defamation papers by Survé or organisations under his control.

In this article, we look at Survé’s case against us and the cases he’s brought against other news organisations.

Our editorial pointed out that Independent Newspapers — a group of titles owned and controlled by Survé — had displayed a clear bias towards the leadership of the National Lotteries Commission in its publication of a series of interviews with disgraced former Commissioner Thabang Mampane in August. These uncritical interviews gave Mampane a platform to defend her record. The month before, we revealed that a Lottery grant had paid for her home on an elite golf estate. Later in the month Independent Online (IOL) published another article: COO dumps National Lotteries a week after commissioner resigned - which also lacks balance.

In his claim against us, Survé says that GroundUp’s editorial was “wrongful and defamatory”. He says that readers would be left with an impression that he and his publications:

Survé says that GroundUp should pay R5-million for this.

The largest defamation award in South African history is R800,000, set by the Northern Cape High Court in July 2021.

GroundUp is just the latest in a long line of news outlets and journalists who are being sued by Survé for reporting on the activity of his newspapers or his businesses. At least six news organisations have been sued in 2022 alone, including eMedia Holdings (owner of e.tv); Media24 (publisher of News24); the Daily Maverick; and Arena (publisher of the Sunday Times, Business Day and others).

The most spectacular threat, and not in a good way, is the R500-million letter of demand against Ann Crotty, Ray Hartley, Business Day and Business Live by Survé’s African News Agency, announced in March 2017.

Then in 2019, labour journalist Terry Bell and Media24 were sued by Survé for R100-million for defamation related to a celebrated 2016 article in which Bell revealed that Survé had routinely lied about his past and his claims to fame.

Bell discovered, among other things, that

And there is much more. Bell’s article is a modern classic and deserves to be re-read.

The case against him did not proceed, Bell told GroundUp. “Much as I was looking forward to it, it was just another empty threat,” he said.

Then, in 2022, Survé launched a flurry of defamation suits, seemingly making good on a number of long-standing threats against rival news publications and journalists who had the temerity to look into his affairs.

E-SAT TV and eMedia Holdings are facing a suit, launched this year.

The Daily Maverick has been served with four such suits, excluding the one that they are cited in with GroundUp. In one, pertaining to an article written by amaBhungane journalist Dewald van Rensburg and two by Chris Roper, Survé is suing for R1.5-million (R500,000 over three articles). Another goes after a Tim Cohen article, which Survé says is worth R1-million in damages. The third takes on Pieter-Louis Myburgh for R1-million for two articles. In all three, Branko Brkic, editor of the Daily Maverick, and Stylianos Charalambous, its CEO, are also cited. Brkic and Charalambous are also sued by Survé for R4-million, for an article and a LinkedIn post.

Wits University is also being sued for defamation. In 2021, Wits hosted the African Investigative Journalism Conference. A panel featuring amaBhungane journalists discussed Survé - and then everyone involved got served with a Survé defamation suit. Watch the offending video here.

Shirona Patel, Wits spokesperson, told GroundUp that, “Dr Survé and associated entities/individuals are claiming R5-million each from the university. The university is opposing this claim.”

Anton Harber, Professor of Journalism Wits University, said, “In this case, Dr Survé is attacking speakers for things said at a university conference. This is a direct and unprecedented attack on academic freedom. It is a case that is likely to set legal precedent - hopefully to shore up the university’s freedom to explore ideas and knowledge without such harassment.”

Survé has also issued dozens of threats of litigation.

The Daily Maverick’s publisher Styli Charalambous says in a March 2022 opinion piece that the news house has been issued with 15 such threats. Even cartoonist Zapiro has received one.

In May this year, NB Publishers, who in October 2019 published Paper Tiger, an account by Alide Dasnois* and Chris Whitfield of Survé’s takeover of Independent Newspapers, received a letter of demand from Survé. News organisations that published extracts of the book were also served with letters.

This, said Gys Visser from NB Publishers, was “a clear attempt at intimidation”. He told GroundUp that the company hadn’t heard anything from Survé’s attorneys “in quite some time”.

SLAPP in the face

Charalambous argues that the letters of demand and lawsuits brought against the Daily Maverick at Survé’s command are not designed to address a legitimate grievance, but just to drain money and time from a rival publication in an attempt to dissuade critical reporting. He diagnoses these as Strategic Litigation Against Public Participation (SLAPP) suits.

In February, the Constitutional Court heard a matter that relates to the use of litigation to silence dissenting voices - Mineral Sands Resource Pty Ltd v Rendell & Others. Judgment is yet to be delivered

Willem De Klerk, an attorney representing Arena, Daily Maverick and amaBhungane against Survé, says they have filed a special plea that Survé’s suits are effectively SLAPP suits, “an abuse of process, namely a campaign against the media”. Action in Survé’s suits has been suspended pending the outcome of the Constitutional Court matter.

“The amounts claimed by Survé are patently exorbitant which Survé knows he would not realistically or even remotely be awarded by the courts, which in our view underscores the abusiveness of the campaign,” said De Klerk.

It is difficult to understand how Survé or his lawyers come to the amounts claimed in their various summons. All his claims are in excess of the largest-ever defamation claim, but even then, it is difficult to understand why the “damage” done by GroundUp is set at R5-million, while Business Day, BusinessLive, Lukanyo Mnyanda, Warren Thompson and Nick Hedley, are being sued for R500,000 for each of three articles. Why is Ann Crotty being sued for R1-million in 2022, when in 2019 a suit against her was worth R500-million?

GroundUp sent Survé detailed questions about the status of his defamation litigation. We asked about cases going back to 2015. We also asked whether the threats of litigation had been followed by summons.

In response, his lawyers, Abrahams Kiewitz Inc. informed us: “Our client will not comment on the matters you refer to, as they are before court.”

Next:  Lottery cracks down on sky-high spending on lawyers