Good and bad ideas for reducing violence in South Africa

We were making progress until 2011. So what happened?

Uyinene Mrwetyana’s murder set off a wave of protests across the country. The release of the latest crime statistics confirmed perceptions: South Africa is becoming more violent; the number of murders has increased every year since 2012.

When it comes to crime stats, murder is a good measure of how we’re doing. It’s the most serious violent crime and also the most accurately recorded, simply because a dead body is harder to misread or obscure than any other category of crime.

Take a look at the changes in homicide since democracy: 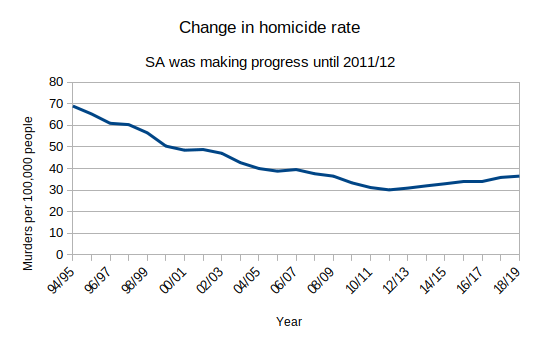 Graph derived from the table above

People are frightened and exasperated. And with exasperation has come not only vigilante killings of crime suspects — the latest statistics show more than two a day — but a spate of easy but bad ideas for reducing crime: bring back the death penalty, castrate men who rape, deny bail to more people, implement harsher prison sentences, and don’t employ people with criminal records at places like the Post Office, the alleged location of Mrwetyana’s murder. Every one of these ideas will either have no effect on crime, or possibly even worsen the problem.

Not only would bringing back the death penalty entail rewriting the fundamental tenets of the Constitution, there’s no compelling evidence that it has any bearing on the murder rate. (In any case, our murder rate was going down for many years after the death sentence was abolished.) Castration’s a non-starter in a civilised country.

As for stricter bail and harsher sentences, retired Constitutional Court Justice Edwin Cameron, speaking at UCT on 11 September, explained how long sentences and harsh prison conditions are pointless in the fight against crime. Our prisons are overcrowded with people awaiting trial, many of whom simply cannot afford bail; others are serving long sentences for non-violent crimes like fraud. Our prisons are places of “pointless punishment”, he said, speaking out against the policy of prescribed minimum sentences. The wall between our prisons and our communities is permeable, and diseases, such as TB, and brutality that are nourished in our prisons spill over outside of prison.

The front page story of the Sunday Times on 8 September appeared to criticise the Post Office for hiring people with criminal convictions. But while there are jobs where some types of convictions should be disqualifying, denying jobs to ex-convicts almost certainly increases recidivism. There is no good reason why the Post Office should ban the hiring of people who have served their time.

Post 1994 we were making progress, with the murder rate dropping from 69 per 100,000 at the end of the period of political violence in 1994 to 30 per 100,000 in 2011-12. Even then it was still frighteningly high compared to the world average of 8, and the rate in Europe and Asia of about 3, but much lower than Jamaica (57), El Salvador (62) and Venezuela (56). The South African murder rate is also much lower than it was throughout the 1980s, albeit higher than it was in the 1950s, according to estimates by UCT criminologist Anine Kriegler.

Why was the murder rate coming down for the first two decades into democracy? The reasons why the number of crimes go up and down are contested by experts because of the huge number of social causes involved. It’s best not to be overconfident about the causes and cures of violence.

Nevertheless, a key factor is likely the legitimacy and effectiveness of the state. It’s probably not a coincidence that murders began increasing during the Jacob Zuma presidency as state institutions, especially the police and National Prosecuting Authority, became increasingly dysfunctional. State capture and the consequent degeneration of institutions is probably the main reason why crime has got worse. To undo the damage we have to fix our institutions, not reach for popular but bad solutions.

Our murder rate diminished for many years after democracy. It can diminish again, but that depends on honest leadership and hard work rebuilding the police, crime intelligence and prosecutions services, and above all on recreating confidence in the crime-fighting capacities of the state in all our communities.

As important is that we support the efforts of organisations, like Sonke Gender Justice, The Seven Passes Initiative, and Ububele, who are working to change attitudes among men. South Africa has a deeply macho culture where men resort at a whim to violence — against women as has been highlighted over the past few weeks, but especially against other men (the vast majority of murderers and murdered are men). Succeeding at this culture change is a long-term project. It is closely linked to reducing inequality and unemployment, to ensuring that many men who feel lost in our society can find dignity, hope and purpose.

Next:  Constitutional Court to rule on “common purpose” in rape cases

Previous:  Gang violence: Mother of slain Bishop Lavis woman doesn’t have much faith in the army