Many immigrant business owners have fled from townships 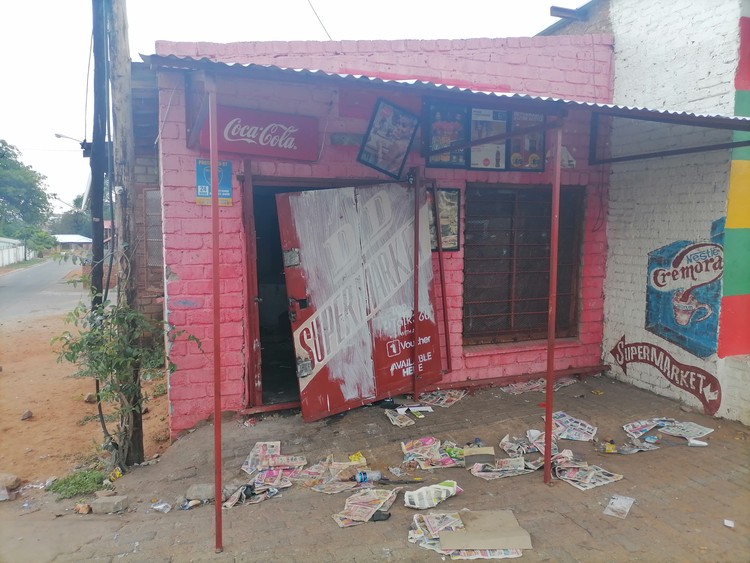 Musina shop owner Daniel Debero from Ethiopia says his goods were looted and equipment damaged on Wednesday. He and other immigrant shop owners have since fled from Musina townships. Photo: Bernard Chiguvare

Several immigrant-owned spaza shops were targeted and looted in Musina, Limpopo, following protests over inconsistent water supply in the town. Many immigrant business owners have since fled from at least two townships.

The protests, which started last Tuesday, briefly brought parts of the town to a standstill as many shops, schools and other public facilities were forced to close their doors. Residents demanded that the Vhembe District Municipality, which is responsible for supplying water to the town, return this authority to the Musina Municipality.

“This is not the first protest that has turned into a looting spree by residents. In most cases protesters turn to looting foreign-owned spaza shops. This is now a culture in South Africa,” said shop owner Daniel Debero from Ethiopia.

On Wednesday, all the spaza shops in Matswale and Nancefield remained closed. Debero’s was among four shops in Nancefield that were ransacked by looters. “When the residents went on strike I closed the shop for safety reasons. On Monday 16 May I was called by some residents alerting me that protesters were looting my shop,” he said.

When looting started in Nancefield, immigrant spaza shop owners in Matswale moved their goods to safe places with the help of other residents.

Biniam Gudiso from Ethiopia has run two spaza shops in Matswale since 2009. “I blame the municipality and police for the looting. Why does the municipality wait for residents to protest and only then provide services?” he asked.

Police vehicles were seen patrolling around Musina Mall along the N1 but Gudiso said police in Musina did not protect immigrants.

Asked about this allegation, Brigadier Motlafela Mojapelo said anyone with complaints about the police should approach the Independent Police Investigative Directorate.

Matodzi Ralushai, Vhembe District Municipality spokesperson, condemned criminal activity during protests. “Peaceful protest is acceptable and the issues raised by the residents are being attended to,” Ralushai told GroundUp.