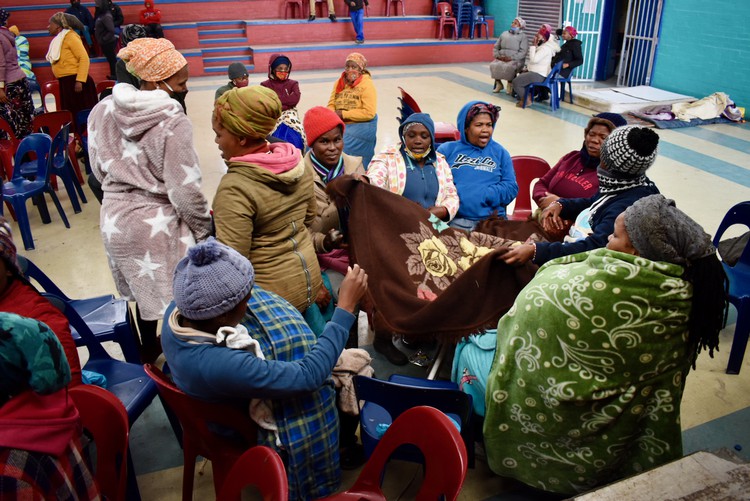 Since Friday night more than 300 people, whose shacks were flooded in the Marikana informal settlement in Philippi East, Cape Town, have been sheltering in the Lower Crossroads community hall.

“We had no other choice but to occupy the community hall,” said Mzwanele Jokani, a community leader.

“Our area has been flooding since last month. We tried so many times for the City to assist us with sand and trucks to suck water out of our area. They promised to give us 50 loads of sand, but they only gave us four,” said Jokani.

“We will continue sleeping here until the City does the right thing,” he said.

Zilungile Matu, one of the people sheltering at the hall, said, “This community hall belongs to all of us. There is no way that we we’re going to destroy it.”

Ward 35 Councillor Nelson Chitha (ANC) said that he couldn’t remove the occupiers from the hall because he too had been asking the City to assist them. “The City made promises, but failed to keep them and the residents have been patient enough. I cannot send them to their flooded area,” he said.

Chitha said when he last spoke to officials he was told that the reason only four loads of sand were delivered was a shortage of drivers. He didn’t accept this as an excuse.

Executive Director for Safety and Security Richard Bosman said the City is aware of the situation. “We are working with the ward councillor to resolve the matter,” he said.

On 20 July, when GroundUp published a story about flooding in Marikana, Mayco Member for Human Settlements Malusi Booi said the City had received almost 60,000 requests for plastic sheeting in the Philippi area alone. He said Marikana was on low-lying, flood-prone land that was unsuitable for human habitation.

Next:  “Government should meet us halfway and give us this land”