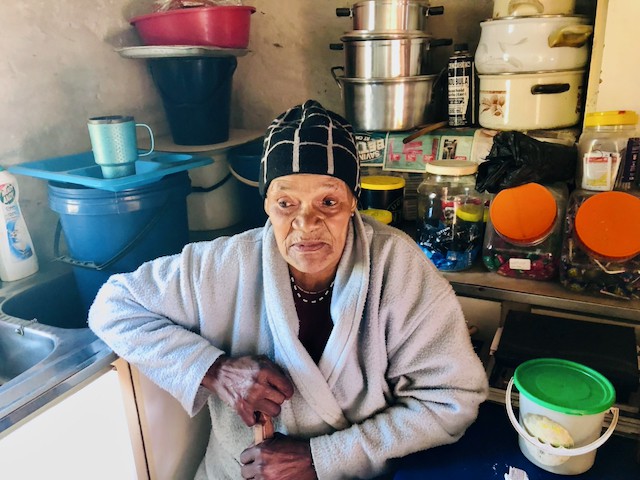 Tabitha Mohape, who is 75, said she has been living at Bapsfontein farm since 1970. Photos: Kimberly Mutandiro

Farm dwellers, whose families have lived on Bapsfontein Farm (portion 5 of Varkfontein) near Bronkhorstspruit since 1954, have taken control of 160 of its 222 hectares, claiming that they are the rightful beneficiaries of the land.

This has given rise to tensions between the 250 farm dwellers and the farmers who were given a lease on the land by the Department of Agriculture in 2007. The land was bought by the government in 1999. It was later leased to Buda Farming.

The farm dwellers say the previous owners, recorded as Velcich and Martins, promised them they would not be evicted after the sale to government. The son-in-law of Ralph Velcich also gave them a letter in 2014 verifying the people who had been on the farm since 1954, most of them over 70 years old.

But the farm dwellers’ tenure has been insecure. Besides the tensions with Buda Farming, there was an attempted land occupation by people from Thembisa, but it was stopped by the local municipality. They say they also faced a threat from coal mining interests. People, who they think were government officials, came to the farm and said there would be prospecting for coal.

The farm dwellers are being assisted by the Workers Occupiers Tenants and Dwellers Forum, which is questioning the Department of Agriculture, Rural Development and Land Reform’s “appointment of beneficiaries”. The farm dwellers have also gone to the Public Protector.

Johannes Mokoena, president of the forum, said, “We have been told that this farm is sitting on a mining [discovery], which is one of the reasons why farm dwellers have been suffering … When government buys a farm it is supposed to give priority to allocation of land to farm dwellers.”

In 2019, the farm dwellers formed a co-operative initiative with a commercial farming enterprise, Lakat Trading, to grow maize. It distributes a portion of the proceeds to farm dwellers. They recently harvested the maize crop and are preparing for the next planting.

Rural Development says this is an illegal arrangement and only Buda Farming has the legal right to farm the land.

The families live in old one-bedroomed farm cottages. Some have built shacks around the compound for their growing families. There is no electricity, despite appeals to the municipality. There is also no tap water.

“The government fails to acknowledge us and our families, but we refuse to give up. By starting a maize farming cooperative we have taken what rightfully belongs to us as farm dwellers,” he said. 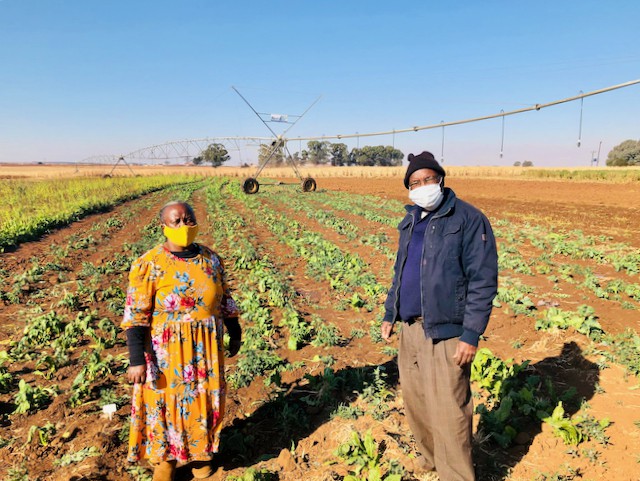 Mphikeleli Patrick Buda and Sarah Buda say they have lost almost two million rand because they are unable to use the land they have leased from government.

The lessees, Mphikeleli Patrick Buda and wife Sarah Buda of Buda farming, say they are sitting with more than 50 bags of seeds received from the Department of Agriculture which they cannot plant now that the farm dwellers have taken control of the land.

They are now planning to take the department to court for breach of agreement. “We do not know where we stand. We have lost over R1.7 million over the past year because we were unable to use the land,” said Mphikeleli Buda.

“We have been threatened by dwellers and currently have a protection order against them. Despite asking the department to allocate us to another farm, nothing has come of it,” said Sarah Buda.

Tabitha Mohape, who is 75, said she arrived on the farm in 1970. She worked in the kitchen and later in the maize fields. “Where do they want us to go, because we lived and worked on this farm? The white farmer said we must live here forever. We are even surprised that the farm was allocated to people who did not live on this farm whom we do not even know,” she said.

The Gauteng Department of Agriculture, Land Reform and Rural Development said it is working towards resolving the dispute which will ultimately result in the conclusion of a lease agreement.

Chief Director of Strategic Communication Linda Page said: “The lease agreement with Mr and Mrs Buda expired in 2013. A new lease agreement is being facilitated subject to resolving the conflict of rights of long-term occupiers (in terms of Extension of Security of Tenure Act) and prospective lessees (in terms of the State Land Lease and Disposal Policy). Mr and Mrs Buda have remained on the farm on the basis of a right of occupation that has been granted to them by the department.”

“The Department has not authorised use of the land by new commercial farmers and no agreement exists. The new commercial farmers is a group made up of farm occupiers, Lakat Trading (Pty) Ltd, and an organisation named Workers Occupiers Dwellers and Tenants, which claims to represent the interest of farm occupiers who are using the land illegally. The Department is trying to deal with unauthorised use of land.”

According to a letter issued by Office of the Regional Land Claims Commissioner Gauteng no land claims had been lodged in respect of the property.

Next:  Operation Show Your Receipt: “They came in and took our mealie meal and oil”

Previous:  The Human Rights Commission is wrong: vaccines are not always optional