Headman who charged R1,500 fee for sale condemned by chief and provincial authority 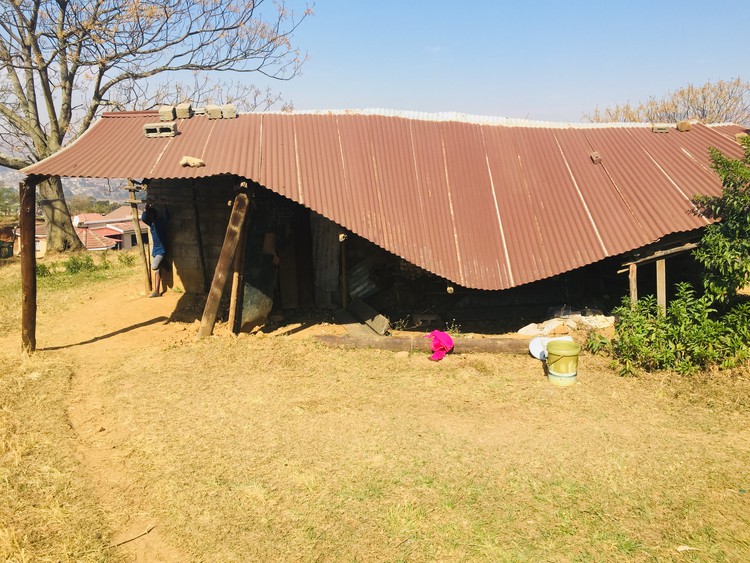 The Magwaza family have to live in this dilapidated house because the RDP house they were given by the chief years ago is currently being occupied y another family who paid a local headman R1,500 for the house. Photo: Nompendulo Ngubane

A Pietermaritzburg family have been embroiled in a two-year battle to regain ownership of a house built for them by the local chief.

The Magwaza family of seven say their trouble began when the chief’s right hand man and member of the traditional council, commonly known as a headman, gave their house away to another family who paid him R1,500.

Zama Magwaza and her five siblings currently live in a dilapidated three-room mud house in Mpumuza, Phayiphini location. Magwaza’s eldest brother, Siphamandla Magwaza, is bedridden after undergoing an operation on his spine four years ago. Their parents died in 2007 and 2009.

In 2014, Chief Nsikayezwe Zondi offered to help the family by allocating land where a RDP house was built by the KZN department of Human Settlements. When the house was completed, instead of moving the Magwaza family in, the headman, Mbuzeni Mthalane, who is also a member of the traditional council in the area gave the house to another family.

“The house is not far from where we are staying. After it was built, we didn’t stay in the house for long. Some community members were not happy that we were prioritised and given a shelter. There were threats from some residents and we were forced to return to our old home. We were scared, ” said Magwaza.

She said they decided to return to the house two years ago and were shocked to discover another family living there.

“The family refused to give our house back. The gogo staying there said she was given the house by Mthalane. She said Mthalane told her that whoever has a problem must deal with him.

“The house we are living in is bad for my brother who is sick. The room he sleeps in is also our kitchen. This is sad because we have our own home which has been taken away from us,” said Zama.

Speaking to GroundUp Mthalane said that when the Magwaza family left the house, he gave the house to an old woman and her family.

“An old lady who was homeless is the owner of that house now. She had no place to stay and I gave her the house. I did report to the chief and he gave me the right to pass on the house to the old lady. She paid a compulsory fee of R1,500. The fee is known to the chief and I did that following his order. The Magwaza children have no say about that house,” said Mthalane.

“The family staying in the RDP home have a right to stay. They paid. The only thing I can do now is to look for another site for [the Magwaza family] but not that house. It doesn’t belong to them anymore,” he said.

Bahlupheleni Shabalala told GroundUp that her family has been living in the house for three years.

“Mthalane told me to pay R1,500 and I did. I was not aware that the house belonged to a certain family until the day I was approached by the Magwaza children not so long ago. I was not told about that family or that they are struggling,” said Shabalala.

Chief Zondi has condemned Mthalane’s actions and described it as illegal. “I will send one of the headsmen to take out the people staying in that house. They are staying there illegally. The house belongs to those children. I did not order anyone to take any money. I don’t know anything about the money or the children being refused ownership. Mthalane will appear before the council and explain what he did,” said Zondi.

KZN Human Settlement spokesperson Mbulelo Baloyi confirmed that the house on record belongs to the Magwaza family. “It is tragic that such a seemingly corrupt and fraudulent act of deceit was done allegedly by someone who is supposed to be representing authority at that traditional level of governance. We shall be investigating how it happened that a bona fide beneficiary was robbed of her home,” said Baloyi.

Next:  Villagers donate money to build a clinic in a shack