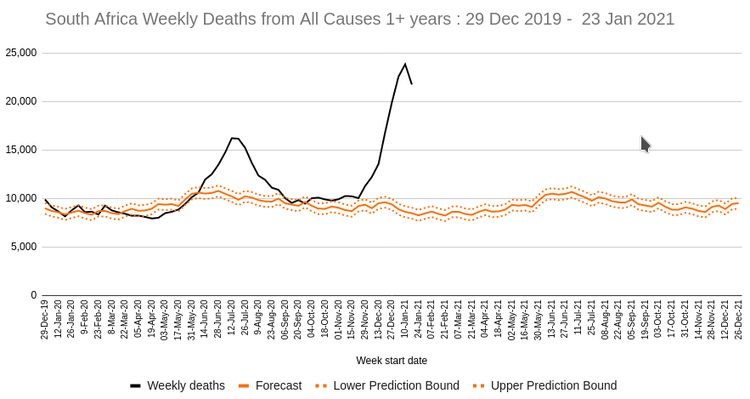 This week’s MRC mortality graph will come as a relief. The excess deaths curve has started going down. But there is some way to go before the end of the second Covid-19 surge.

For the first time since November, the number of weekly excess deaths estimated by Medical Research Council (MRC) has declined.

The latest MRC report, published on Wednesday, shows that the total number of deaths dropped from about 23,900 for the week ending 16 January to about 21,800 for the week ending 23 January. The excess deaths dropped from about 15,500 to 13,500. There have been about 120,000 excess deaths since 3 May. Excess deaths appear to have declined in all provinces except North West, Free State and Northern Cape, though the rate of increase has also come down in these provinces. (All numbers rounded to nearest 100.)

The MRC previously reported over 16,000 excess deaths for the week ending 16 January, though this estimate has since been revised slightly downwards to about 15,500. The 23,900 or so total number of deaths in that week was still by far the highest recorded in South Africa.

There is still some way to go before the end of the second Covid-19 surge, but we appear to have turned the corner. Many lives can be saved and perhaps a third wave can be prevented or mitigated if a massive vaccine rollout takes place over the next few months.

Next:  Community and mining company clash over vanadium-rich land