The everyday heroes of Cyclone Idai

Zimbabwe’s people helped as best they could

Electricity, not a sure thing in Zimbabwe at the best of times, cut out as Cyclone Idai and its 190km/hour winds swirled up from Mozambique towards Chimanimani in Zimbabwe’s eastern highlands.

As the force of the wind battered the walls of the house and sheets of almost horizontal rain flowed under the door and leaked through the roof, 23-year-old Praymore Mwarumba felt around in the pitch darkness and raised his bed on some logs. Then he sat out a night of strange and frightening sounds, as the southern hemisphere’s strongest cyclone on record thrashed around him.

The resulting mudslides carrying rocks and trees that washed down normally placid streams on that night of 15 March destroyed more than 100 homes in Chimanimani’s Ngangu high density area where Mwarumba rents a room. It sounded like heavy vehicles, he said. There were also the sounds of people screaming and calling for help.

But with no torch and unable to see his hand before his face, there was nothing to do but wait for daylight.

When dawn finally filtered through the heavy cloud cover, he saw “people walking around, everyone busy doing something, carrying blankets, food. I saw this is a disaster. I saw people injured.”

Mwarumba, who is unemployed, plays in the Matsetso Stars under 25 soccer team run by Chimanimani conservationist Jane High, who is a former physical education teacher. He has also trained as a mountain guide under High’s mentorship.

He immediately started helping to recover the bodies of his neighbours whose houses had been in the path of the mudslides that came down from the steep slopes above the township, and put his first aid training to work helping the injured as best he could. 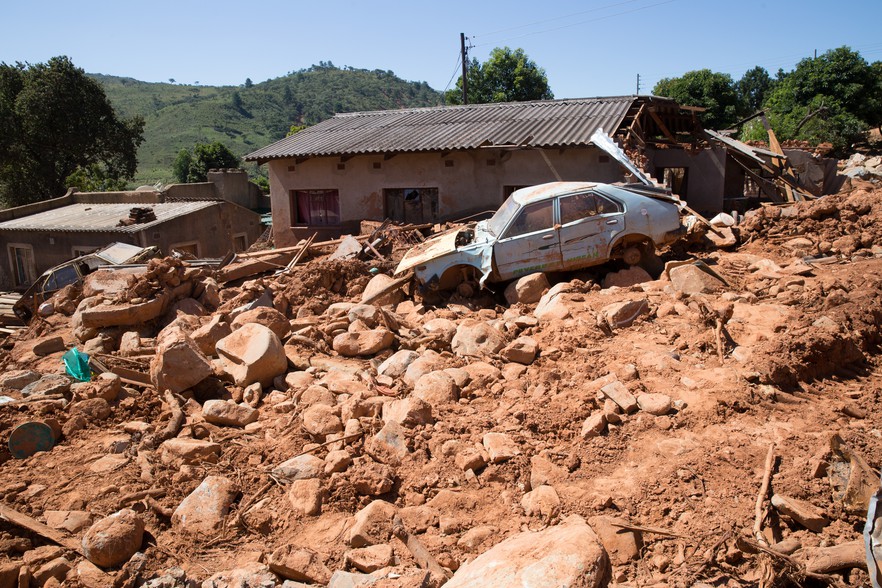 Rocks and mud rests where homes once stood in Ngangu. Although the death toll is unknown, residents said that 49 people were buried after the cyclone in the local cemetery.

Among the injuries were broken limbs, and “many people with broken spinal cords”. He said 11 people in Ngangu had broken backs. Later on, he saw five broken spines in a settlement over the mountain called Sheri, and three in Manase. “I saw them with my own eyes.”

He said most of these injuries were caused by falling walls.

Mwarumba and his friend and soccer team mate Decent Semenye made stretchers from sacking and poles and carried the injured, as well as the dead, to the Roman Catholic church that survived the storm.

“Three, we found alive in the river. Many died. Many children are dead,” said Mwarumba as he related the story at the Chimanimani Tourism Association offices run by High.

He saw five injured people die in the five days before medical help could arrive.

While he worked through Saturday, Sunday and Monday, he did not know if his brother, Johnson Mwarumba, who was in the town of Chipinge the Friday the cyclone struck, was alive or dead.

Then on Monday night he heard that Johnson had been washed away while trying to walk across Charter Bridge when the taxi in which he was travelling home could go no further.

On Tuesday Mwarumba and some friends went to pick up his brother’s body, as it had been found and placed beside the road. They carried him 7km back to Ngangu.

Once help started arriving, first by air on Wednesday 20 March, and later by road as contractors created temporary causeways across sections that had washed away, he and his Matsetso Stars teammates threw their efforts into distributing the tons of relief aid from Miracle Missions arriving in the town.

He said “government members” in Chimanimani were only dealing with the disaster in Ngangu and not covering other affected areas in the rural district.

One of the areas that needed help was Shiri, at Takakunda Village, about 12km to the south over steep terrain.

Mwarumba and Courage Mutunzi loaded up with 20kg each of private donor aid received from organisations such as Miracle Missions, and hiked 12km over the mountain to Shiri.

When they got back home the next day, they learnt they had overlooked a household of five children, headed by a severely disabled 18-year-old. So Mwarumba, joined this time by Liniwe Tsangamidzi and Beverly Majoro, hiked back up.

High said she gave the team three instructions: Wash them, feed them, and make them laugh. She says it is evident from the photos they took on their cellphones that they did a fantastic job.

To distribute the aid, they had to defy the District Administrator, the most powerful politician in the local area.

Before the hike to take aid to Shiri, High got a call from a regional official at Econet, the largest cellular communication company in Zimbabwe. 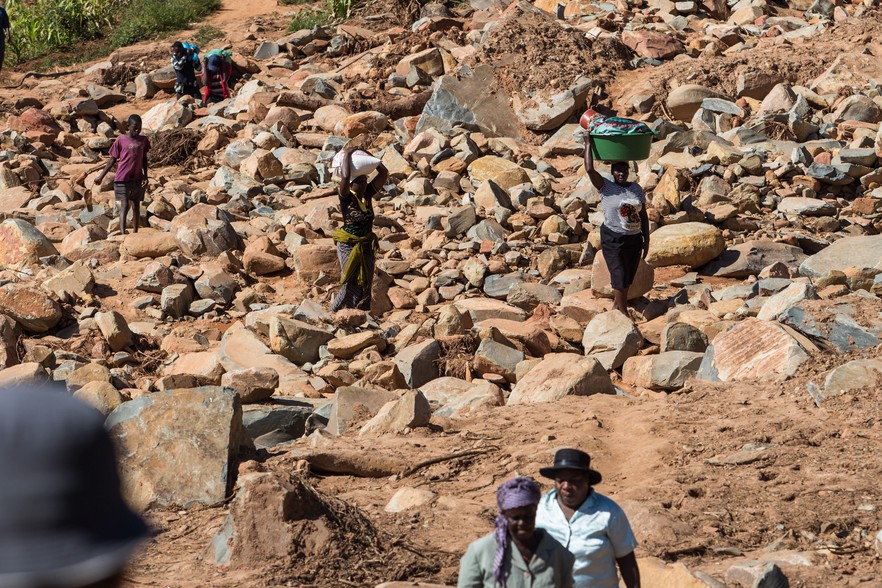 Residents walk over rocks and mud where their homes once stood.

With the electricity in the region knocked out for days, the backup generator at the Econet booster station on Pork Pie hill above Chimanimani had run out of fuel. This meant cellphone reception was very sketchy for everyone in town, including the police and army. It also hampered transactions via the mobile money app Ecocash, which is the predominant local currency.

High says Econet engineer Allen Mapasure called through to ask for help getting fuel to the booster station. “I said sure.” She said she got the soccer team together and told them about the mission. Fuel was sourced and eight young men carried it up, with a 20 litre container of fuel between two.

Mwarumba was one of those who slogged the 5km up to the summit 600m above town. High said most hikers took about two-and-a-half hours to amble up. Mwarumba and his teammates did it in 90 minutes.

Once at the base station, Mwarumba says they had to cut through the razor wires, as the keys were in the offices in Mutare. Then they called one of the Econet technical team who told them how to get the generator going.

They carried the remaining 40litres of fuel up the next day.

In return, Econet sent in a helicopter packed with aid organised by Miracle Missions from Mutare.

High said she insisted the soccer team would unload the helicopter, as she was wary of the materials falling into the hands of government officials who were using aid as a political tool.

“The helicopter landed with aid, so the DA (District Administrator) said they won’t allow us to take that stuff, it’s for the government,” relates Mwarumba. “We lined up. I was the first to go to the chopper. The DA told us to stop but we refused.”

He said the team only took orders from their coach, Jane High. “We have only one commander. He [the DA] was so angry about that.”

The bags of foodstuffs and toiletries, was then loaded into the back of waiting bakkies from the Mutare 4x4 club. He said they packed about 18 double cab bakkies with relief goods for areas that were being overlooked.

Mwarumba says he did not know his father, and his mother is not around. With his brother Johnson gone, he is alone. The soccer team is his family and, at 23, High takes the place of his mother, he says.

As Chimanimani settles down to assess its losses and plan for the future, Mwarumba says he is disturbed that he had not been taught the proper burial rites he should have performed at his brother’s grave. “Now I’m thinking of my brother’s son, I want to look after him, make sure he has an education. And I’m going to help other people. That’s my mission.”

The aftermath of Cyclone Idai in Ngangu.

Next:  We’re lucky to be alive, says Durban flood survivor