But unclear if it will be enough to placate protesters

The Overstrand Municipality plans to move nearly 150 families in Zwelihle, a township in Hermanus, to emergency housing by the end of August.

Zwelihle consists of formal houses as well as shacks in the backyards of these formal houses. People staying in the shacks, known as backyarders, pay rent to the formal house owners. The backyarders have been protesting for the past few months, demanding land on which to be able to settle. Many have ended up on the street, unable to pay their rent.

During the protests, people complained about broken promises, municipal mismanagement, and a controversial deal involving a piece of land in a neighbouring area called Sculphoek.

The municipality aims to house the nearly 150 families on a piece of land that is being cleared next to an old waste disposal site in Zwelihle.

In an interview with GroundUp Stephen Müller, the Director for Infrastructure and Planning for Overstrand municipality, explained that one side of the dumpsite will be for housing, while the other side, which isn’t suitable for human settlement, will be developed into a sports field.

“The identified piece of land of about a hectare is to accommodate the vulnerable and desperate people who have been evicted from the backyards, now living in streets and cars,” said Müller.

Müller explained that government housing policy is meant to provide houses for the poorest families, those with an income of less than R3,500 per month. But many of the people who participated in the latest Zwelihle unrest are earning more than R3,500. In a town like Hermanus people who earn R4,000 to R5,000 per month can’t afford to buy or rent a house. Even higher income groups like school teachers, police and nurses are battling, he said.

“They can’t afford to live in Hermanus. They just can’t find any accommodation and there is no government processes to help them. They don’t qualify for the houses the municipality is building here in Hermanus hence they are renting shacks from other people’s backyards. They don’t have access to water, toilets and electricity. Yet they work hard and are an important part of the economy. Society can’t function without them. Guest house managers, chefs and restaurant managers also don’t qualify.”

Müller said the waiting list for houses is growing. He said the community feels that the municipality is not delivering enough houses quickly enough. There is always a problem with who qualifies. Often there are housing protests. There was one in Stanford at the end of last year, Kleinmond two years ago and the recent ones in Zwelihle, he explained.

He said that RDP housing has been going on for eight years in Zwelihle, Gansbaai and Beverly Hills. Two projects are starting in Stanford and in Masakhane in the next six months or so. “When these people heard we made an agreement with Zwelihle they started protesting but we had to assure them that this project cannot interfere with the current ones in the pipeline. Gansbaai and Stanford have been waiting patiently for more than three to five years.”

He added that informal settlements will be formalised. Instead of people getting one toilet per five families and one tap per 25, a tap would be put on every site. 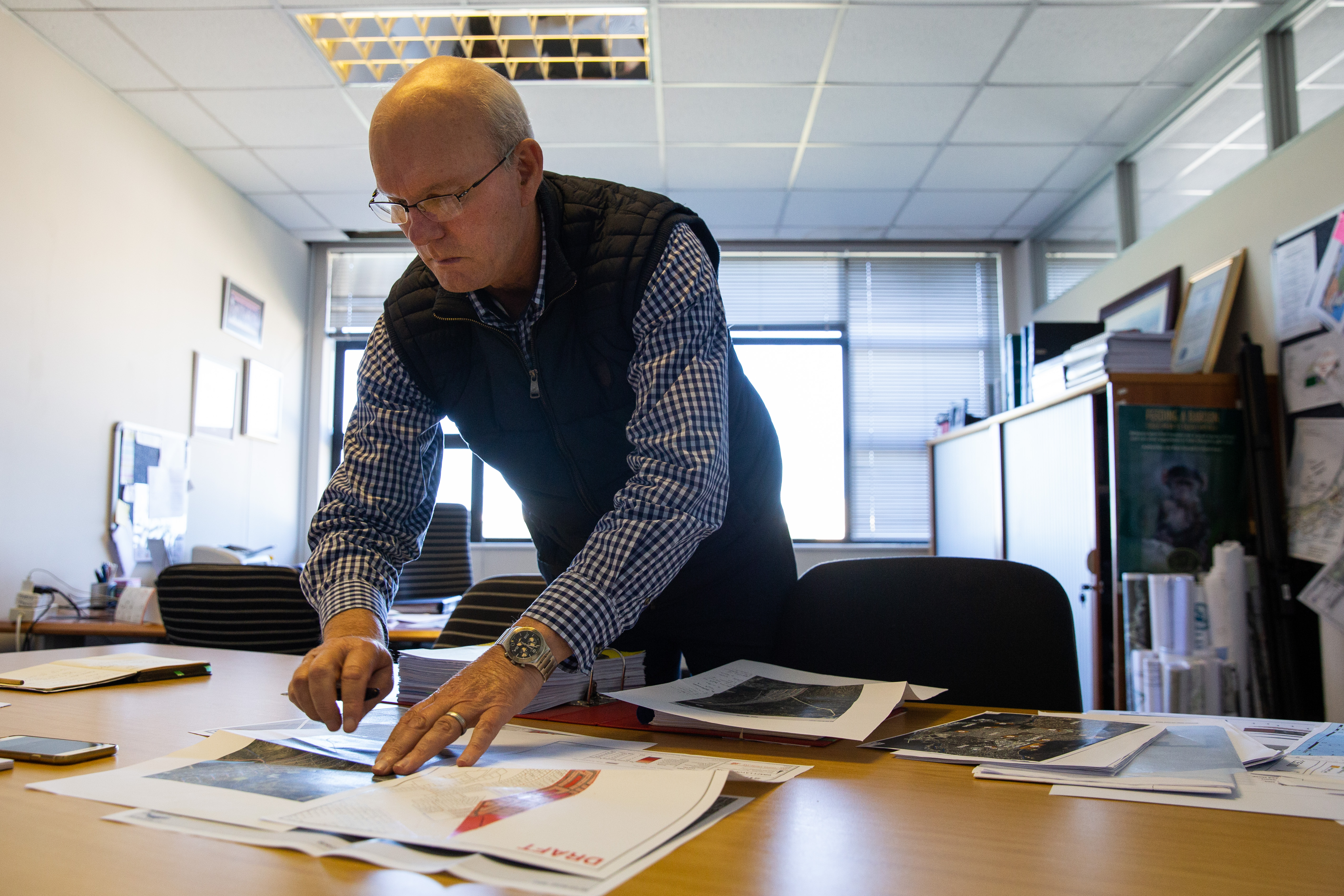 Stephen Müller, the Director for Infrastructure and planning for the Overstrand municipality. Photo: Ashraf Hendricks

The municipality would also make more land available for business and community facilities like crèches and sport fields.

“Zwelihle is now on top of everything else. The minister is negotiating with the owners to buy Schulphoek. We have already started preliminary planning with the community leaders and we need to engage the bigger community and other stakeholders in the community,” he said.

Müller said it would take about 24 months before the actual building happens in Schulphoek. The environmental impact assessment might take nine months, the planning process nine months, design and funding six months.

He said that the intention is to do mixed housing, from free houses to affordable housing and rental accommodation.

Junior Thumiya, a community leader of Zwelihle, criticised the municipality’s approach. He said the emergency housing area identified was too small for the thousands of protesting backyarders. He accused the municipality of wasting money creating problems instead of fixing them.

He said, “You can’t move a person out of the shack and put him in temporary housing. Then while waiting for the service plot, you take him again and issue a place to erect a shack and not a house. The government policy is clear on that. It says from the shack you give people a proper service, meaning a house whereby a family can live forever. When are they going to build houses for them? It is going to take them another 15 years again.”

Police kill three people in three days of lockdown. This is normal for South Africa