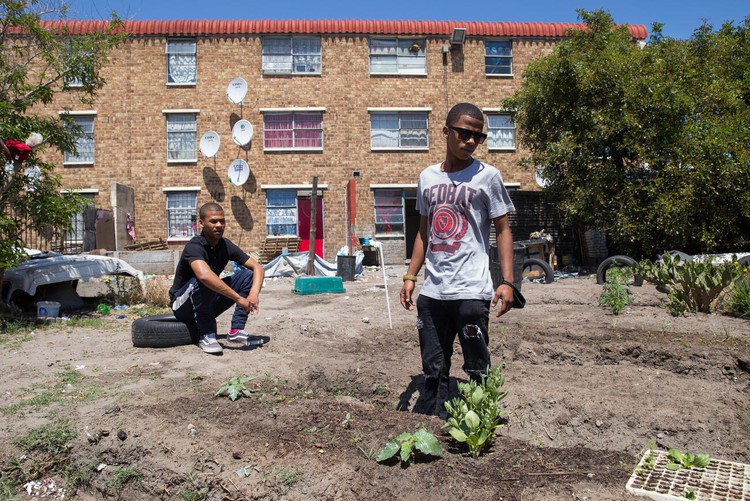 Valentino De Klerk (left) and his brother Geronimo started a community garden at the Trinity Place flats in Elsies River with the hope of feeding their community. Photo: Ashraf Hendricks

Geronimo De Klerk and his brother Valentino have started a community garden outside the Trinity Place council flats in Elsies River, Cape Town.

De Klerk hopes that the newly-planted garden will be the first of many in the area. They have planted potatoes, cacti, beetroot, beans, and a small lemon tree. They get some seeds from the Cape Town Together Food Initiative.

The garden uses grey water, collected in five litre bottles, from the nearby flats. While the garden is still developing, the De Klerk brothers hope to give the vegetables they grow to feeding schemes in the area.

Their garden grows in the shadow of a newly-built three-metre high wall. The wall was erected by the City of Cape Town earlier this year, after years of resistance by the community. Geronimo and Valentino were part of the Elsies River chapter of #UniteBehind, led by June Esau Lang, until December 2019. This community initiative was succeeded by two groups, Vorentoe, and Geronimo and Valentino’s group, HopeGodsGiftForAll.

Prior to the wall, gangsters would use the Trinity Place flats as a thoroughfare. While gang violence is still rife in Elsies River, De Klerk says the wall has helped reduce violent incidents.

In 2018, the Elsies River chapter of #UniteBehind demanded that the City refurbish the council-owned flats. They also campaigned for more community safety after a spate of gang murders last year.

Now, many of the floodlights are operating, and the troublesome drains on the flats are working as they should.

De Klerk said that they have been given permission to start a second garden on a larger plot by ward councillor Chris Jordaan, who also donated spades for them to garden. He says they still need more safety equipment like gloves to clear the second plot.

The De Klerk brothers say that youth unemployment in the area is extremely high and has deepened during the lockdown. Valentino works in the film industry and Geronimo helps to educate youth on the effects of climate change.

They hope that their gardens can be one way of getting the youth of Trinity, and Elsies River at large, working again.