Although people arrived from as early as 4:30am, vaccinations only started at about noon 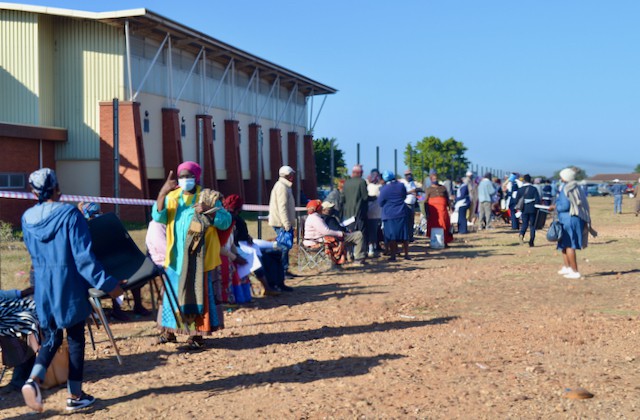 Hundreds of elderly people waited in a long queue outside the Raymond Mhlaba Sports Centre in Gqeberha on Friday for their turn to be vaccinated against Covid-19. Photo: Joseph Chirume

Hundreds of elderly people waited in long queues outside the Raymond Mhlaba Sports Centre in Gqeberha on Friday for their turn to be vaccinated against Covid-19. They had heard they could get vaccinated at the site and word spread quickly. Many thought it was a one-day event so they rushed to be there.

Although people wore masks, there was a lack of social distancing in the long queue that didn’t move for hours. People complained they were thirsty and hungry. They used their consent forms to cover their heads against the scorching sun.

One woman said that she did not get a message to come to the site even though she had registered “long ago”. She said, “Just seeing people queueing outside our houses was reason enough for us to come and join the queue … People just don’t know what to do and who to ask.”

Another person said they had heard about the vaccination site from their ward councillor, and another from a pastor who had told them to come early. One 64-year-old said she had arrived at 5am.

Velile Mkokeli said he arrived at 4:30am, hoping to be one of the first. And indeed, he was among the first 60. “We were told that they will only take 300 people today,” he said.

People had to wait and wait. Vaccinations started only around noon, but there were not nearly enough doses — only 150 according to a worker at the centre. Many who could not be helped were told to return on Monday. Some people were clearly angry and disappointed.

Earlier, Siphiwe Tsenene, who was in the queue, said, “It is the silence of officials that is making us become angry. They are not even telling us when the vaccine will arrive.”

Eastern Cape Department of Health spokesperson Sizwe Kupelo appealed to people to wait for messages on their mobile phones. There is no need for people to arrive early in the morning, explained Kupelo. “People are encouraged to register on the Electronic Vaccination Data System (EVDS) and only present themselves when they have received a voucher. The media should assist in communicating these messages so that people don’t subject themselves to these conditions.”

Next:  Our health in brief - part four: How will the health system cope over the next four years?