Law enforcement and march marshals were quick to contain the situation 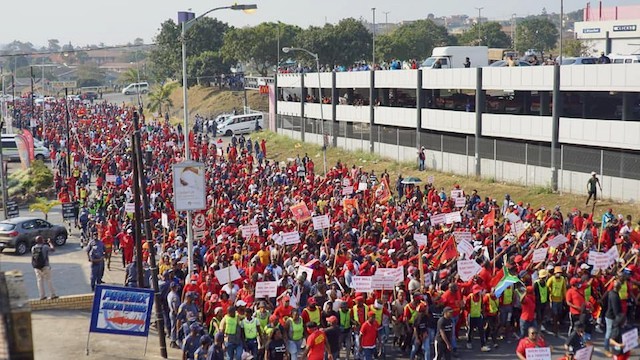 Economic Freedom Fighters marched in Phoenix to protest the killing of 36 people during the July unrest. Photo: Nokulunga Majola.

Phoenix, Durban, came to a standstill on Thursday as the Economic Freedom Fighters (EFF) marched to protest the killing of 36 people during the July unrest.

Despite Covid-19 pandemic regulations, which were ignored, about 20 buses transported EFF party members from different parts of Durban to Phoenix.

Demonstrators in the party’s red regalia sang struggle songs and carried placards with “Down with racism” and “Justice for victims of Phoenix massacre”.

Along the Phoenix Highway, EFF marchers stoned buildings and hurled insults at residents who were watching from their balconies. Law enforcement and march marshals were quick to contain the situation.

A community media journalist was also manhandled by a member of the EFF. She told GroundUp: “He grabbed me from the back. I was so frightened, and when people saw what was happening they came to me to comfort me as I was literally in tears.”

EFF secretary general, Marshall Dlamini, said, “Indian racists of Phoenix must know that we are not their friends and we will confront them and we will defeat them. If a racist confronts you with violence you must respond with violence. If you are walking these streets here in Phoenix and a racist threatens to take your life, take the life of the racist.”

EFF leader in KwaZulu-Natal, Vusi Khoza, said the march was about justice for the victims and they want the police to investigate all the murders.

Sham Maharaj, from the Phoenix Peace Committee, said things have returned to normal and they continue to work with the community to restore peace by building social cohesion in neighbouring communities, such as Zwelisha, Bhambayi, Amaoti and others.

Religious leader Suresh Singh said, “We want peace and unity in the community. A lot has happened and all we need to do now is to heal, restore peace and move on together as the community.”

Chairperson of the Phoenix Community Police Forum Umesh Singh said EFF deserved its opportunity to stage a demonstration in Phoenix as many other parties and organisations have done in the past weeks.

Busani Ngwenya, committee member from Zwelisha, told GroundUp that a lot of people lost their lives and justice must be served. He said the arrival of the EFF in Phoenix might stir up some trouble, but he was hopeful that people would once again live in peace.

“People are still angry about what happened. We watched as many people from our communities were killed like animals. It will take time for people to heal,” Ngwenya said.

Zolile Msindazwe, from Amaoti, who is also on the Zwelisha committee, said, “People died and this is not something that we can keep quiet about. I believe that with all the marches and protests that are taking place it shows that people care about what happened, and I hope it gives families of the victims comfort to know that they are not forgotten and that justice will be served.”

A memorandum was handed to the police in private. The march ended at about 4pm.

Next:  Families living along Cape Town railway line to be resettled

Previous:  No water means no service: Hundreds turned away at Gqeberha labour office