“You ask yourself who is next and it is scary” 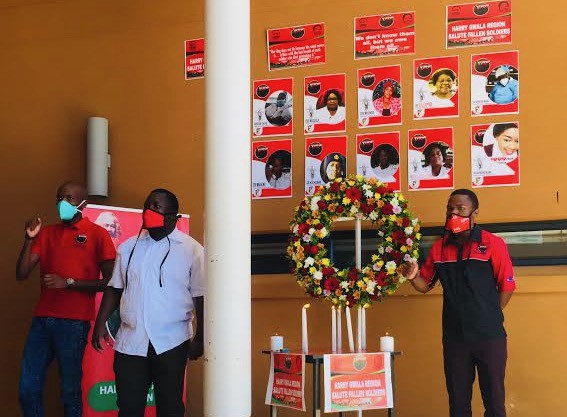 The National Education, Health Allied Workers Union (NEHAWU) held a wreath-laying ceremony in tribute to nine frontline health workers who died last week from Covid-19 in Edendale hospital in Pietermaritzburg, according to the union.

NEHAWU secretary in the Harry Gwala region Mazwi Ngubane said eight of those who died were nurses from different wards. Pictures and names of the staff were pasted on the wall of the hospital entrance. Staff are allowed to light candles, pray and leave flowers for the whole week.

According to a statement released by KwaZulu-Natal premier Sihle Zikalala on 17 January, a total number of 11,419 health workers have been infected with Covid-19 in the public sector since the beginning of the pandemic. Of these 107 (just under 1%) have succumbed to the disease. Most of those infected are nurses (55%), with doctors accounting for 6%.

Ngubane said wreath-laying ceremonies would be held in all the hospitals in the province since memorial services are not allowed because of Covid-19 regulations.

“In this hospital alone, we have lost many health workers just in one week. These deaths are challenging us to push the government to acknowledge health workers,” said Ngubane.

He said working conditions were still not safe in hospitals including Edendale hospital.

“Workers report to us many incidents where they feel they are being left unprotected from the virus. Regulations are not followed and that exposes patients to the disease. We receive complaints from workers that some of the management employees come to work after they have tested positive,” said Ngubane.

A worker who asked not to be named said it is sad to bury so many colleagues in a short space of time.

“You ask yourself who is next and it is scary. It’s mentally and physically draining. Our therapy is to laugh hard and be positive every day. It’s not easy. Hope is gone. The saddest part of it is that we can’t pay our last respects. We cannot bury our colleagues because of the Covid-19 regulations,” said the worker.

NEHAWU provincial secretary Ayanda Zulu told GroundUp that though there had been improvements in the provision of personal protective equipment (PPE), there were still issues with quality. But addressing the media on Sunday, Health MEC Nomagugu Simelane Zulu said there was no shortage in the province.

“We have enough PPE. I personally get a report on a daily basis on the amount of the PPE, how they are spread, the sizes available and districts they have been supplied to,” said Zulu.

The KZN department of Health spokesperson Agiza Hlongwane said the department could not confirm that nine health workers had died in Edendale Hospital. “We can’t confirm those stats because that’s not our job,” said Hlongwane.

GroundUp was not able to establish all their full names. Family members who could have supplied information were not able to attend the memorial because of Covid-19 regulations.

Next:  Police probe use of water cannon against social grant applicants