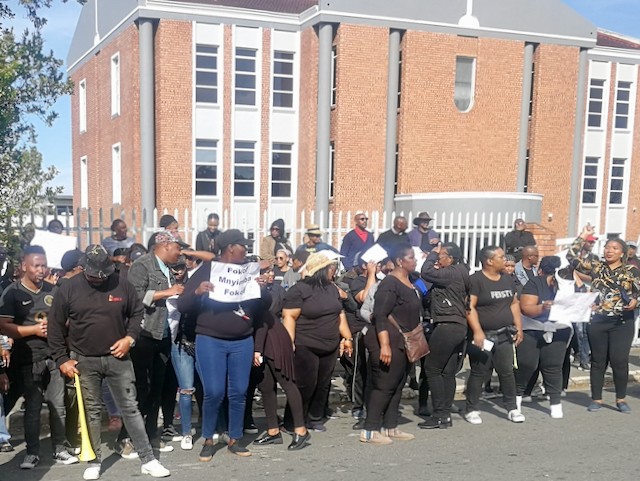 Workers of Amathole District Municipality picket outside the East London High Court on Thursday where a matter involving the workers and dismissed municipal manager Thandekile Mnyimba was to be heard. Photo: Johnnie Isaac.

Eastern Cape Cooperative Governance and Traditional Affairs MEC Xolile Nqatha lashed out at striking municipal workers on Wednesday and blamed them for triggering panic and a water crisis affecting tens of thousands of Amathole District Municipality residents. The municipality also blamed the strike and said there had been sabotage of infrastructure as well.

But workers at Amathole Municipality say the MEC is ignoring the issues and instead inciting the community against them.

Workers say they have not had a salary increase for three years. They are also demanding Covid allowances, which they say were promised but never paid.

South African Municipal Workers Union (SAMWU) shop steward Lorna Lubedu said the real cause of the outages was management failing to service pumps and maintain the water infrastructure. She said workers don’t have the necessary tools or vehicles.

Lubedu denied worker involvement in sabotage. “We have never tampered with any infrastructure,” she said.

Lubedu said “some business forums” had “misled the MEC, telling him that we are the ones who tampered with water infrastructure”.

She said the treatment plant in Ngqamakhwe had not been working since September 2020, because the electricity cables were stolen and never replaced.

Mongezi Mabhece, of the Independent Municipal and Allied Trade Union (IMATU), said, “We were expecting more from MEC Nqatha because he knows the frustrations of dealing with Amathole Municipality.”

“There was a collective [bargaining] agreement that was signed by all the parties for three years, but Mnyimba decided willy-nilly as a municipal manager that he was not going to implement it,” said Mabhece.

Amathole municipal spokesperson Nonceba Madikizela-Vuso said, “A meeting is set to take place today [Friday] between ADM leadership and the union representatives after which a statement will be issued,” she said.

Meanwhile, water outages remain across the enormous municipal district. There is still no water in Butterworth or Fort Beaufort.

Ethembeni Location in King William’s Town has also been out of water for two weeks.

Ward committee member Fundile Gebe said a week before the strike, the Amathole District Municipality told ward councillors to tell residents to collect as much water as possible.

“Unfortunately we did not inform everyone. Most people were not informed due to their ward committees not being active,” said Gebe.

“Those who have no water will have no choice but to drink water from the river,” he said.

Stutterheim has been without water for eight days. Sizeka Mehlo said, “We are hungry while our cupboards have food, because we can’t cook without water.”

Butterworth residents told GroundUp they are planning to protest over the lack of water. Athenkosi Gwayi said that most of the water tanks in Butterworth have not been filled for three weeks.

“The tanks used to be filled twice a week or at least once a week. Now they stopped, and there’s no communication from Amathole District or Mnquma Local Municipality,” he said.

Meanwhile, in Lurwayizo in Willowvale, William Pitoli said he didn’t know that there was a strike on. The taps in his village have been dry for years. “We lost hope that ADM will ever fix our taps,” he said.

Next:  SJC’s suspended general manager charged with fraud in excess of R730,000

Previous:  This is why Tembisa residents started deadly riots