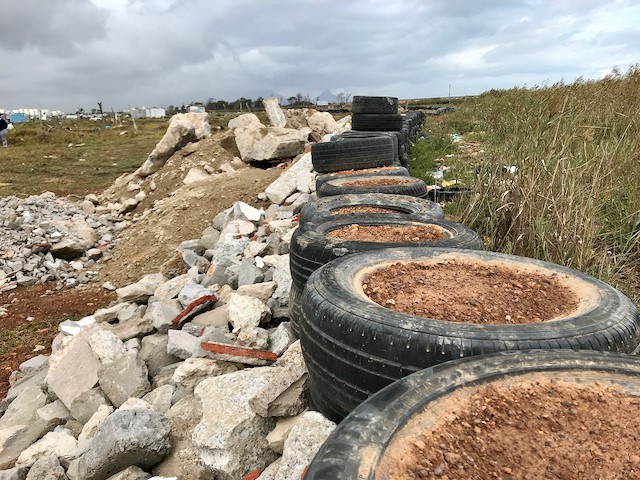 People occupying privately owned land along the Diep River are using tyres and rubble to build a barrier they hope will stop the kind of flooding they experienced last winter. Photo: Peter Luhanga

The residents fled overcrowded living conditions and unaffordable rental prices in Dunoon township and occupied the private owned land in 2019.

A number of residents have moved to higher ground, erecting their shacks underneath Eskom pylons along the Sandown Road and Malibongwe Drive. But many residents think this is too dangerous. Some people have also occupied private land across the river near Parklands North. But about 800 families remain along the flood-prone river bank.

Viziyalo Madolo, chairperson of the areas community leaders, said residents came up with a plan to build a flood control barrier approximately ten metres from the river. About 20 families are participating. Since November 2020, they have been going around Cape Town collecting worn out tyres at illegal dumping hot spots in Killarney, Joe Slovo Park in Milnerton, Gugulethu, Vissershok and Morning Star. They buy building rubble – old bricks, tiles and other material – from construction sites for R70 to R120 a truck load.

“We are going to fight the water. Nothing is going to stop us. We have come far. We are not going anywhere,” said Madolo.

Ward 104 Councillor Lubabalo Makeleni said, “A lot of people lost their belongings in last year’s winter floods. It is a good thing they are doing. It will protect them from water. I encourage them.”

Previous:  Two months without water in settlement for elderly and people with disabilities