About 1,500 Dunoon families are to be moved to Winning Way 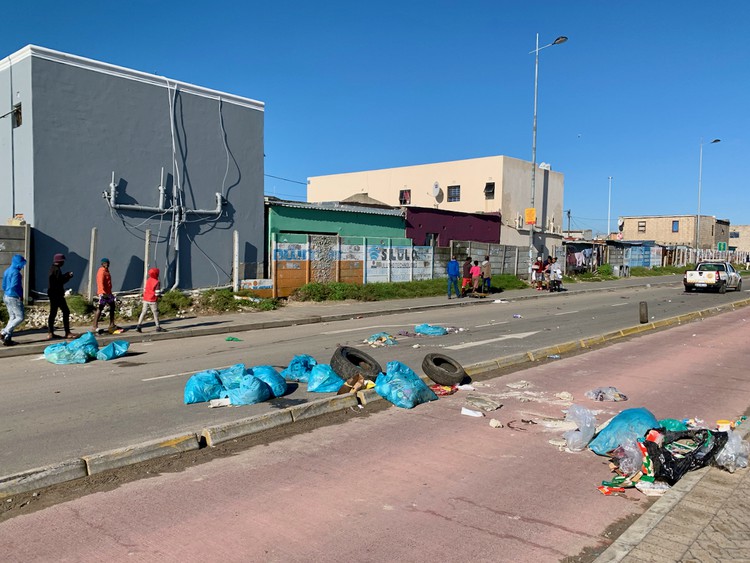 Doornbach residents upset with the plans to relocate 1,500 Dunoon families took to the streets on Monday and blocked Potsdam Road. Photo: Peter Luhanga

About 400 residents from Doornbach informal settlement protested over plans to relocate 1,500 families from Dunoon to Winning Way industrial park near to them. They also vented their anger over a lack of toilets and piped water.

Doornbach residents started gathering at 3am on Monday. They burnt tyres and strew trash across Potsdam Road. By 5am police had fired tear gas and rubber bullets to disperse them.

In April, Minister of Human Settlements, Water and Sanitation Lindiwe Sisulu announced government plans to relocate 1,500 families to Transitional Residential Units (TRUs) to mitigate the spread of Covid-19. Dunoon is overcrowded and considered a pandemic hotspot.

Hlokoma Ngqentsu, who moved into Doornbach informal settlement in 2002, was one of those leading the protest. Ngqentsu said they lived in squalid, overcrowded conditions with nine families to one bucket toilet and 30 families to a standpipe tap.

Another community leader, Fezeka Mrhwetyana, said she moved to Doornbach in 2003 and conditions have not improved in all the years since.

“We are unemployed. We cannot afford to buy sanitisers. During the day the water pressure is very low, how are we going to wash our hands with no water during the day?” asked Mrhwetyana.

She said that in 2016 the City had shared its plans to upgrade the settlement and recruited people to survey the households, yet nothing had come of this.

She said Doornbach residents had laid claim to the vacant land where the Dunoon residents are to be relocated.

The protesters handed a memorandum listing their grievances to a senior police officer giving the City five days to respond.

Mayco member for Human Settlements Malusi Booi said the City condemned the destruction of property and the impact the violent protests had on the broader community. “This is especially unacceptable in light of recent engagements in the area,” he said.

“Any progress has always been dependent on creating the necessary physical space to upgrade the site with underground services, access ways, among others,” said Booi. He said the City hoped that de-densification plans by the provincial government would help speed up this project.

“Provided that it is not all derailed by organised land invasions on the sites in question,” he said.

Next:  Do poorer communities have fewer plant and animal species?