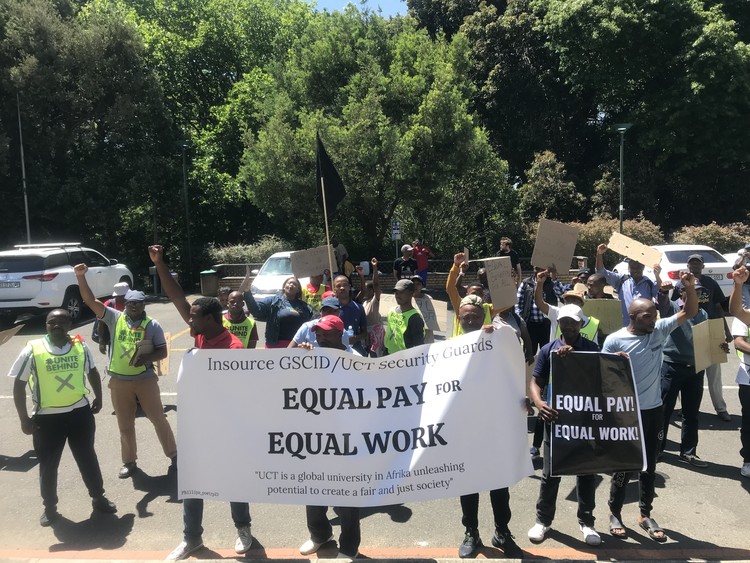 Dismissed security guards, supported by civil society groups, picket outside the University of Cape Town’s Bremner Building on Tuesday. They have asked the university’s COO to be insourced. Photos: Tariro Washinyira

About 40 people picketed outside the University of Cape Town (UCT)’s Bremner Building on Tuesday in support of security guards who were sacked after they disrupted a June exam.

Last month, GroundUp reported on how former student activist Sibusiso Mpendulo had deceived the guards for years, falsely claiming to be a lawyer, taking their money, forging a court order, and promising to fight for them to be insourced by the university. He then led them to disrupt exams, which resulted in 31 workers being dismissed.

On 12 October, the guards, their families and Students Representative Council (SRC) members held a picket on the university’s upper campus plaza, asking students for forgiveness and to support their plea to be insourced by UCT.

The picket on Tuesday follows a letter received on 25 October from Dr Reno Morar, UCT’s chief operating officer (COO). In the letter, Morar stated that, “…the 31 security officers were employed by the Groote Schuur Community Improvement District (GSCID) and a private company, Securitas. The security officers in question were employed to manage the public spaces and places in the vicinity of UCT and not on the university campuses.

“Their services in public spaces and places were not restricted to the UCT vicinity but were spread across all the residential and business spaces. The GSCID works in partnership with UCT … to create a safer environment for all by providing ‘top up’ public spaces services to those provided by the City of Cape Town.” 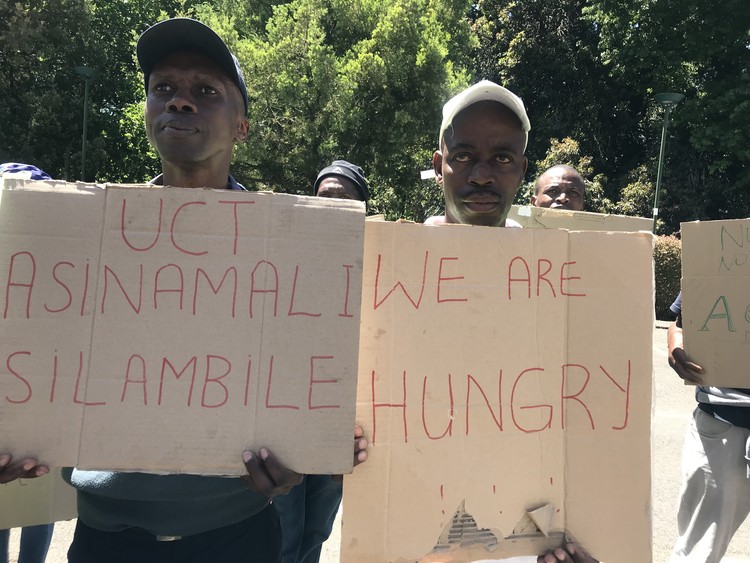 Nelson Mthembu and Samuel Nhlapo are among the 31 dismissed guards. They say they have been struggling to find jobs and that their families are struggling.

In their memo, the dismissed workers said that Dr Morar’s letter failed to provide adequate evidence of a difference between the workers and campus security. The workers, for this reason, believe the university’s failure to insource them is “arbitrary” and “unfair discrimination”.

“We urge you to reconsider your position especially, as you state in your reply, that you have already insourced more than 1,000 workers. Surely, insourcing less than 10% of this number is a reasonable proposition.”

According to the dismissed workers, the majority of the GSCID/Securitas guards patrol and are stationed on UCT property. “They [the security guards] have always been told that their primary responsibility is protecting UCT students, received orders from UCT, directly, or through GSCID but have originated from UCT,” the memo stated.

After accepting the memo, Dr Morar said, “I have signed the document. It is in both our interests that I will reply as I did before via email.”

UCT spokesperson Elijah Moholola responded after publication of this article. In addition to Dr Morar’s point, he added that UCT completed its insourcing process in 2016 when it hired 1,000 workers.

Next:  Rubbish piles up outside Gqeberha primary school

Previous:  A victory for PRASA’s corruption-busters