Coal mining is a very dirty business. And as a stream of abuse on social media against those challenging a new coal mining venture in one of South Africa’s most critical and formally protected water catchment areas confirms, the dirt isn’t always in the coal dust.

Twitter accusations against a coalition of eight environmental and social justice groups and their lawyers seeking to block the planned Yzermyn Underground Coal Mine development at Mabola in Mpumalanga, include treason, economic sabotage, extortion, bribery, blackmail, duplicity, dishonesty and lies.

They are further accused of being “anti-national, anti-people, anti-development”, and a comparison to Nazi propaganda chief Joseph Goebbels has been thrown in for good measure.

As ludicrous as it sounds, it’s no laughing matter, and suggests that a Bell Pottinger-style social media harassment strategy may be underway against opponents of the mine project.

Particularly worrying was a thinly veiled death threat made on Facebook last month, aimed at local farmer Oubaas Malan who also opposes the Yzermyn mine but is not involved in the comprehensive legal challenges currently underway by the coalition.

The threat was posted by Thabiso Nene, who heads The Voice Community Representative Council, a registered NPO billed as “a community-based organisation that stands for radical economic transformation” in the Dr Pixley Ka Isaka Seme local municipality where the would-be mine is located.

What particularly incenses Nene, Tripathi and other supporters of Atha Africa is that an open coal mine, Loskop, has been operating on Malan’s family farm on the same area. However, Malan has countered by pointing out that this is an old mine started in the 1980s – three decades before the Mabola Protected Area was proclaimed – and that he doesn’t own the mining right to it. Although he concedes negotiating a fee from the mining company that most recently owned the mining right and attempted to work the mine, now effectively abandoned, he says it reneged on payments to him and has caused severe environmental damage.

Last month, Malan boasted to the Saturday Star newspaper about his tenacity in tackling Atha Africa. “I’m like a Jack Russell terrier fighting a boerbul. I won’t let go,” he was quoted as saying.

Nene’s lengthy Facebook response included what can be interpreted as a death threat: “As Oubaas say ‘I’m like Jack Russel terrier fighting boerboel. I just won’t let go’ he should watch our community lays Jack Russel terrier to permanent sleep. We r masters in resting dogs with rabies. Obaas can take dat to de bank.”

A formal complaint about the death threat – that now appears to have been removed from Facebook – was made to the South African Human Rights Commission. The commission described the threat as “naked criminality” but declined to investigate, suggesting instead that the police should handle the matter because of the violence implicit in it.

Many of the offending tweets in the social media campaign against the coalition have been made by Praveer Tripathi, senior vice-president of the Atha Africa Ventures mining company that plans to develop Yzermyn. It acquired a mining right in 2015 but the granting of this right and various environmental approvals are now being challenged by the coalition.

Tripathi’s Twitter profile distances him from his employer, suggesting his comments should not be read as signifying his professional position as a senior executive of Atha Africa, a subsidiary of the India-based international mining company Atha Group. The company has also attempted to distance itself from his highly controversial remarks. “Mr Tripathi’s posts on his personal account, are his own personal views and do not mirror the views and opinions of Atha Africa. Accordingly, Atha Africa is not responsible for these comments.” However, the company has not publicly condemned any of Tripathi’s comments, but asked that questions on the matter be directed to the executive himself. 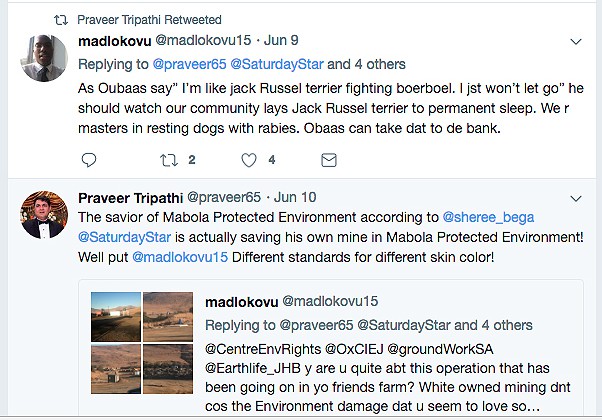 A formal complaint about Tripathi’s earlier social media comments has been lodged with Minerals Council South Africa (formerly the Chamber of Mines) by the Centre for Environmental Rights, a public interest group of attorneys that represents the coalition. Atha Africa Ventures is a Council member and as such is bound by the Council’s mandatory code of ethical business conduct and guiding principles. The Council has yet to respond to the Centre’s complaint.

Tripathi, who has just 70 Twitter followers, last week failed to respond to emailed questions asking him to explain the accusations in his tweets and to comment on their possible consequences. Instead, he posted correspondence from this writer on his Twitter timeline, accompanied by derogatory comments. His posts prompted some of his followers to post their own abusive tweets.

The proposed Yzermyn coal mine lies within the water-rich, protected grasslands of the Ekangala/Drakensberg strategic water source area – one of 22 such areas that collectively comprise just 8% of South Africa’s land yet provide half of all surface run-off water in the form of wetlands, streams and rivers.

Environmentalists argue that coal mining is highly destructive and poisonous to the environment, and is not compatible with biodiversity conservation of pristine areas like Mabola that provide invaluable “ecosystem services” like water. If the project is allowed to continue, the proposed coal mine in Mabola will set a dangerous precedent that will expose all of South Africa’s protected environments to encroachment from mining and other destructive and non-sustainable land uses, they say.

But Mabola is also within an area marked by extreme poverty and unemployment where many local residents are desperate for jobs. So it’s understandable that the possibility of some 500 work opportunities – albeit unskilled – at the proposed mine is highly attractive to some of them. 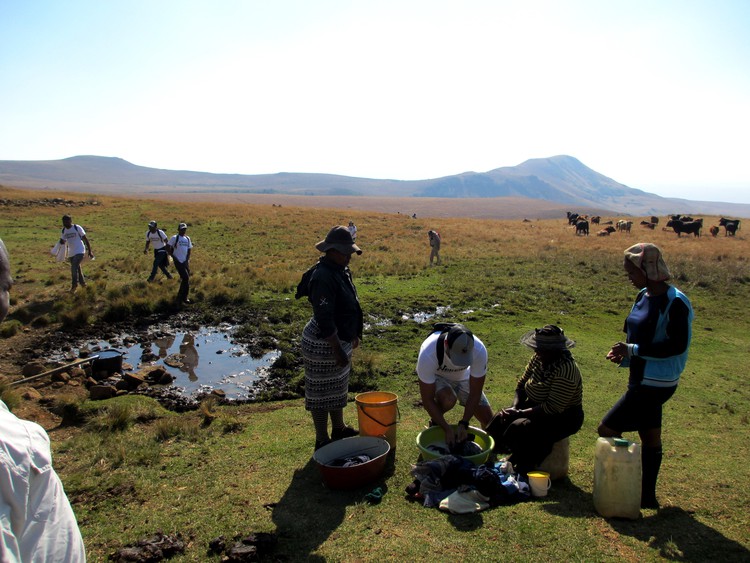 Residents of Mabola get water from a spring. Photo supplied

The social media invective against coalition members and its lawyers has increased significantly over the past two months as several of the legal challenges to the coal project approach adjudication. The first, an appeal to the Water Tribunal to overturn the water licence granted to Yzermyn, is set down for hearing from Tuesday to Thursday this week.

On 29 June, Nene’s The Voice organised a public meeting in Volksrust that was billed as an open forum debate “to clear misconceptions about the proposed mining project near Wakkerstroom”. Nene posted on Facebook that an invitation had been extended to the management of Atha Africa and that it had confirmed its attendance. “That very progressive Atha management,” he said approvingly.

An invitation was also extended to members of the coalition and the Centre for Environmental Rights (CER) but it was declined. The Centre told Mining Weekly it would not be appropriate for it to take part in a public debate because of the extensive pending litigation in the matter.

Its refusal prompted a string of Twitter insults from Tripathi, including: “Is the Cenre [sic] for Environmental Rights afraid that it’s lies would be nailed in the #communitywantstoknow initiative by the community? They said the mine will threaten Gauteng and have National and Intntnl impacts. Why don’t they explain the ‘how’ to the community?”

After the meeting, attended by some 1,400 people, Tripathi congratulated Nene for “exposing” the “foreign funded” and “treasonous” organisations “who have no sympathies and respect for the community”. This allegation of treason was picked up and repeated several times.

However, the only “evidence” they produced to back the allegation was publicly available documents from the Swedish International Development Cooperation Agency (SIDA) detailing some funding for two of the organisations in the coalition. SIDA is an official Swedish government agency of the Ministry for Foreign Affairs, responsible for the bulk of Sweden’s official development assistance to developing countries and civil society groups – including South Africa’s democratic government.

Cyberbullying on the rise

The tactic of social media harassment is becoming increasingly common in South Africa and elsewhere in the world, where vulnerable communities and civil society organisations have been working to protect and promote environmental and social justice in the face of strong-arm and bullying tactics by some governments and big business – notably mining interests.

Threats and intimidation create an emotionally charged atmosphere that makes it harder for communities to achieve resolution, and in some scenarios can result in physical violence, injury, destruction of property and even murder.

A case in point is the tragic death in March 2016 of Sikhosiphi “Bazooka” Radebe at Mbizana in Pondoland, who was leading opposition to the attempt by Australian mining company Mineral Commodities Ltd to mine mineral sands at Xolobeni. Although the Hawks have not made any progress in their investigation into Radebe’s murder – this was confirmed by spokesman Brigadier Hangwani Mulaudzi last week – it’s widely believed that he was assassinated because of his opposition to the mining proposal.

And as recently as this month, two activists opposing the relocation of a community in KwaDube in KwaZulu-Natal, supposedly to accommodate onshore mining operations between Mthunzini and Richards Bay, were also shot dead execution-style within days of each other.

Murray Hunter of the Right2Know Campaign says threats and attacks from mining companies are part of a bigger trend of corporations trying to bully their critics into silence. “We know from bitter experience that those who go up against big-money mining projects often face worse than threats in the end.”

And Melissa Fourie of the Cape Town-based Centre for Environmental Rights – one of the main targets of the Yzermyn invective – says it’s a common pattern in South Africa. “Within our network of environmental rights activists and defenders, we see threats and intimidation of activists every day, most of these not reported or recorded.”

Neither Tripathi nor Nene responded to a question by this writer when asked whether they considered their respective tweets and/or Facebook posts to be inflammatory or possibly fuelling tensions with potentially dangerous consequences.

However, Tripathi responded on social media to a letter that was sent to Atha Africa’s attorney by the Centre for Environmental Rights, drawing attention to Tripathi’s “inaccurate and defamatory” statements about the Centre. The Centre’s letter noted: “Particularly concerning is that some statements are threatening, and have the potential to incite violence.”

On Twitter, Tripathi accused the CER of being defamatory and of “costing South Africa tens of thousands of jobs and development opportunities” – “The responsibility sits on you” he charged.

On 5 July, Nene posted a statement on Facebook: “If it’s war they want, it [sic] war they will get”, and added a response to several replies to this statement: “They are busy blocking development that’s suppose to change the life’s. They should just return the damn land once, & they should refrain from threatening us with civil war or economic meltdown.”

Jen Gleason of the Environmental Law Alliance Worldwide says attacks on people who stand up for vulnerable communities and the environment are on the rise around the world, and that her organisation works with public interest lawyers around the world who are putting themselves at risk daily.

“Powerful interests, inside and outside government, use violence, threats, prosecution, slander, regulatory burdens and more to cut off those defending human rights,” she says. This exposes grassroots advocates “to great personal risk”.

Hunter of Right2Know says it rejects the “corporate bullyism” of Atha-Africa. “We need to protect… critical voices, not just for the sake of environmental governance, but to ensure that corporations working in South Africa respect free speech and freedom of association.”

Next:  Durban residents will take to the streets if City doesn’t clean up its act