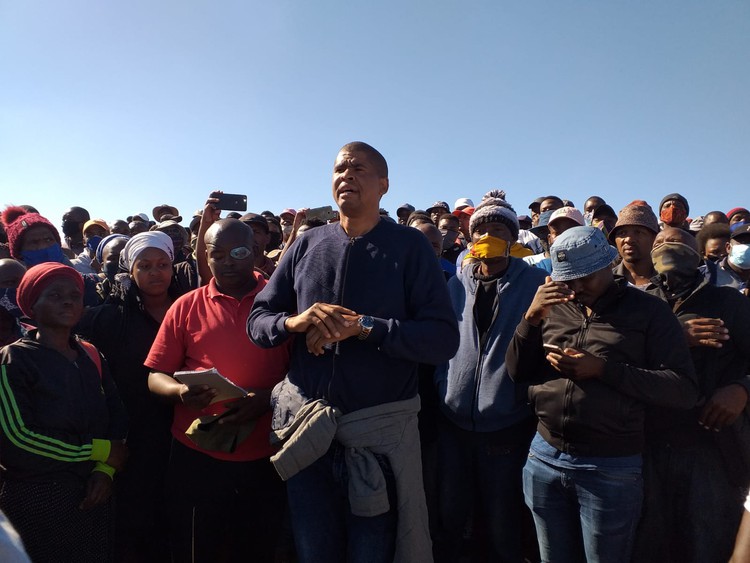 Over 1,000 people who occupied land and named the area Covid Village, near Old Faure Road and Mew Way, want the government to service the area and supply them with shack materials.

The group have been protesting for housing and services along the highway for weeks. Most of the occupiers say they are former backyard dwellers who can no longer afford rental fees. Some people are already staying on the land while others have pegged out their plots and are waiting for the go-ahead to build their shacks.

On Saturday, community activist Loyiso Nkohla told occupiers that he was trying to convince national and provincial ministers of human settlements to give them new materials to build their shacks.

He was briefing them after a recent meeting he attended with ministers and senior government officials regarding the occupation and ongoing protests.

He told those whose building materials were confiscated during the most recent demolitions to wait for new materials. The City must build roads, install water taps, electricity and toilets on the land, he said.

“You can’t live in squalid, crowded informal settlements and stay under the same conditions again here. You must set up a steering committee to oversee the development of Covid Village. The ministers and architects will check where to build roads, schools and such things and present their plans to the committee.”

Nkohla said he and community leaders had handed a list of names to the Housing Development Agency (HDA) to check which of the occupiers qualified for RDP houses.

“Before the minister puts money aside to repair the land, she must meet the Cabinet and get its approval. Sisulu admits that the government failed to take former backyarders into account in its Covid-19 response,” he said.

Community leader Thabiso Ngwevu said, “While Sisulu and senior government officials have discussions about the land, just build your shack and ignore other messages.”

Residents staying in cramped temporary houses near Mew Way must also move into the new informal settlement, he said.

“Whatever the government plans to do must happen while you stay in your shacks here,” he said.

Next:  Criminalising cannabis use by children is unconstitutional, court rules