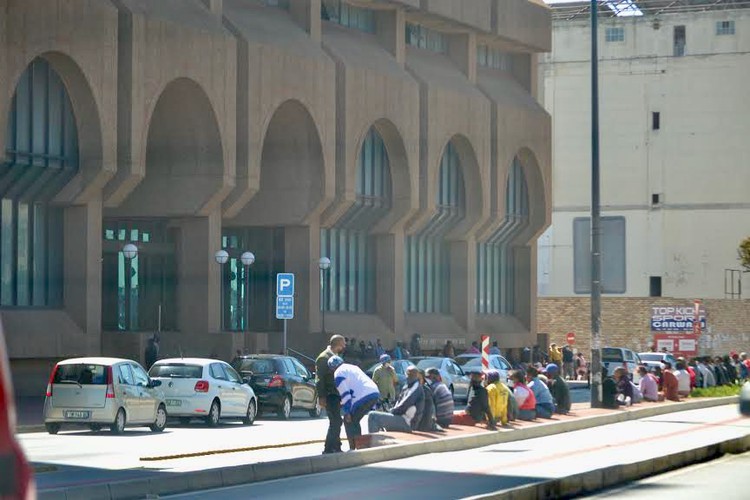 Beneficiaries of the Covid-19 grant from Nelson Mandela Bay townships are coming to the city centre to collect their money, because post offices in the township are offline, closed or chaotic. Some pay R50 out of their R350-a-month grant for the journey.

When GroundUp visited Linton Grange post office on Monday many of the beneficiaries in the long queue had come from townships.

Mercia Mayor from West End said, “It’s been six months since Saltville Post Office has been closed because there is no electricity. It is walking distance from my house to it. But I have to borrow R50 every time I come here in Linton Grange and access my grant.

“We want it to reopen because it saves us a taxi fare that we could have used to buy food for our children.”

Kholiwe Keke from Motherwell said, “I spend R50 to come here because it is guaranteed I will get my money. This money will help me to buy food for my three kids. But the Motherwell Post Office is chaos. People are sleeping outside the mall. There is no social distance in those queues and masks are not worn properly. We are at risk of getting infected.”

“I am number 44 in the queue but soon I will get my money and go back home, unlike in Motherwell where we are turned back daily without getting our money,” she said.

Sipho Dyeshani, also from Motherwell, said, “I’d rather spend the R50 on taxi fare than waste my time in the long queue at Motherwell Post Office.

Shannon Mintoor from Arcadia spent R70 on an Uber to come to town rather than go to Algoa Park Post Office. “People are sleeping outside there. Rather than wasting my time standing on the long queue for nothing I decided to take an Uber for R70 to bring me here.”

Johan Kruger, SA Post Office national spokesperson, confirmed that the system at Saltville Post Office was “off due to electrical problems”.

“We are paying old age pensions at the branch using a laptop. But it’s been six months since we’ve been unable to pay the R350 grants.”

Kruger said: “27 branches are open. The Zwide branch is temporarily closed; Swartkops is unable to pay out the SRD Covid relief grants. Motherwell branch is operational.

“Swartkops network is down after a burglary on 14 December 2020 during which the network fixtures were vandalised. Our technicians were unable to repair it, and have escalated the fault to an external contractor who will now repair the damaged network.”

At Port Elizabeth’s main post office, hundreds of beneficiaries from Bethelsdorp, KwaZakhele, Zwide, and Algoa Park as well as Motherwell were queueing.

Sandra Jansen said she had come all the way from Betheldorp to queue in the city centre. “I was supposed to collect my R350 from the Saltville post office but since September last year, that post office is always offline. The lights in the building went off and they are still off even today while the workers are sitting doing nothing. I am sick and tired of that post office.”

Her husband, Peter Jansen, said, “We had to borrow money to come here because we can’t access our own post office’s services.”

“I used to work at the post office; services were better than today.”

Next:  Teachers, let’s use this time wisely

Previous:  Ivermectin and Covid-19: what we still don’t know