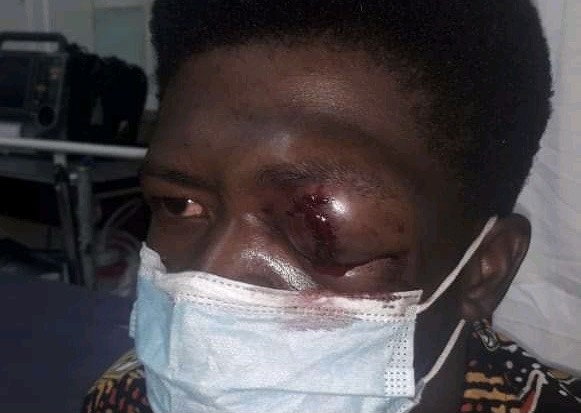 Esoyolo Bambiso says he was beaten for several hours by police in Cookhouse when he was found outside his mother’s house after curfew on Christmas night. Photo: supplied

An Eastern Cape social worker plans to sue police minister Bheki Cele after her 20-year-old son and a teenager were assaulted on Christmas night when they broke curfew regulations.

Esoyolo Bambiso, 20, said he was near his mother’s house when police caught him and took him to the Cookhouse police station where they beat him for several hours.

The matter has been referred to the Independent Police Investigative Directorate.

“Police beat me up for no good reason,” said Bambiso. “After I had supper at my mother’s house in Central Street I walked to my home which is not too far from here to sleep. But when I got there I found the house locked. I had to come back, thinking that maybe I will find my cousin there as we both eat from the same place.

“But as I was about to enter the gate, police caught me. They said I undermine (ndiyadelela) and I brag too much (ndinamatshamba). I tried to explain but they never listened.”

Esoyolo said the police took him to the police station. “Five police took turns in beating me for hours. They klapped, punched and kicked me in the face until my eye was swollen. As they were assaulting me, they kept on saying ndiyadelela and ndinamatshamba.”

He said the beating had affected his eyesight.

He had also been fined R500 for breaking the Disaster Management Act.

His mother Ntombentsha Bambiso, who is a social worker, said other people including teenagers had been assaulted by police in the area. “But residents are scared of reporting these incidents.”

“My son Esoyolo is one of the victims. He is a sweet boy who can’t even hurt a fly. We can’t let these police abuse our children like this. As soon as I finish quarantine I will consult my lawyers.” Ntombentsha Bambiso has tested positive for Covid.

Another mother, Zoleka Kuse, said police had damaged the hearing of 14-year-old her son Akhona.

“My son wanted to leave home after 9pm to go to my neighbour’s house to play TV games. I asked his elder brother to stop him because I had a fear that police would arrest him. While he was battling to bring him inside in front of our main gate, three or four police arrived.

“They never asked questions, they klapped them and took them to the police station. I wanted to go with them but the police turned me away.”

“According to his elder brother Akhona was klapped and kicked on the head. One cop had to intervene saying my child was a minor. The whole night he could not sleep because of a sore ear and head.”

Kuse said her son has developed hearing problems and doctors at Somerset East Hospital had said his eardrum was damaged. “They also sent him to Livingstone Hospital for a scan because they suspected he might have a cracked skull.” She has not yet had the results of the scan.

“I want police to pay for the damages they have caused to my son,” said Kuse.

Lirandzu Themba, spokesperson for Minister Cele, told GroundUp: “The minister is encouraged that IPID is investigating the matters concerning alleged police brutality. We will have to wait for the processes to unfold. With that said, Minister Cele has said there is no room for police brutality in the SAPS.

Cookhouse police spokesperson Captain Bradley Rawlson confirmed that Esoyolo’s case and another case had been referred to IPID for investigation.