Usable water in Nelson Mandela Bay is down to 2.3% of dam capacity

“This water crisis has put our lives on hold” 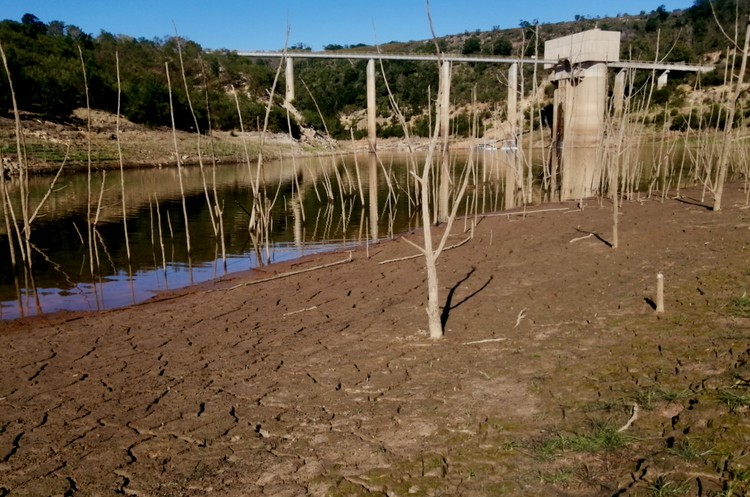 The Impofu Dam (above) was at 10.26% on 11 July. Nelson Mandela Bay supply dam levels are at 14.7% of combined capacity, but the accessible (“usable”) water that can be transferred to treatment and reservoirs is currently at 2.3% of dam capacity. Photos: Mkhuseli Sizani

As the water crisis intensifies in Nelson Mandela Bay, people queue for hours to fill containers from Jojo tanks filled by municipal tankers.

Dam levels are at 14.7% of combined capacity, but the accessible (“usable”) water that can be transferred to treatment plants and reservoirs in Nelson Mandela Bay is currently at 2.3% of dam capacity. This changes slightly according to how the barges extracting the water are moved.

The municipality says it is very concerned about high water usage on weekends. Last month, it was installing new water meter systems to restrict households to 50-litres per person per day.

Joseph Tsatsire, municipal director of water distribution, said consumption had been climbing steadily in the metro last week to 263-million litres per day on Friday.

He said significant progress had been made to eradicate thousands of leaks across the municipality.

Luvuyo Bangazi, spokesperson for the Metro Joint Operations Committee on Drought Mitigation, said, “There is no community that is left to go dry without an intervention.” 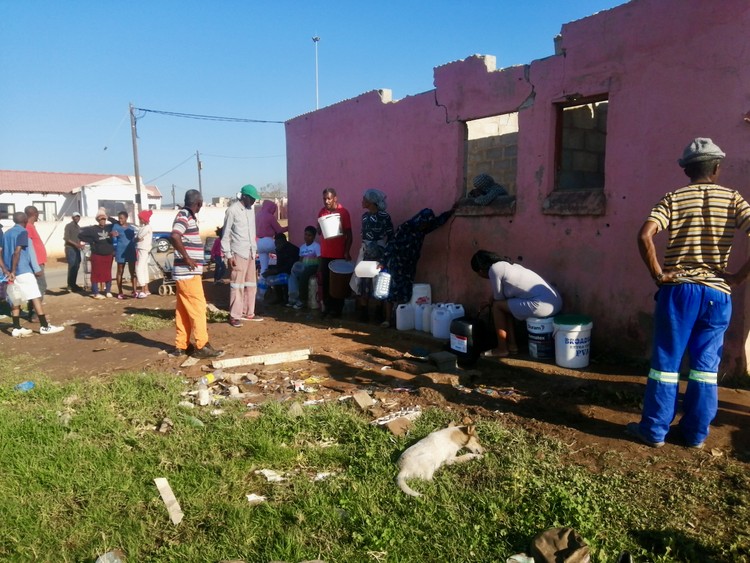 Chris Hani residents in Kariega queue for water from a pipe at a vandalised RDP house on Saturday.

On Saturday in Chris Hani, KwaNobuhle, people came with wheelbarrows, shopping trolleys and wheelie bins to collect as much water as they could from a Jojo tank.

Fundiswa Tsotsa, who stood in a queue with over 50 people, said, “On Friday night I left this queue at 10pm without water. This morning the queue started at 4am, but now it is 9am, and I’m still far from the tank because each person brings a lot of containers.”

“Since February our water taps have been dry,” she said.

She said the municipality then put up two 5,000-litre Jojo tanks and filled them with water from trucks. But she complained that for the past three weeks the supply has been unreliable and one tank was removed.

“For three to four days the tanker does not supply water,” she said.

“We are about 5,000 households here in Chris Hani. But the tanker today only delivered 2,500 litres. The driver said he couldn’t fill up the [Jojo] because there were many areas without water,” she said.

“We are really desperate for water. Most of us here are unemployed and we survive on social grants. When this tank is empty, we buy five-litres of water from the shops for R6 in order to cook. But for my family of four that is not enough.”

Twenty-year-old Anathi Gqeshe was busy filling 30 two-litre bottles for his family of seven. “This is exhausting,” he said. “Since February I have been fetching water like this. Three of my siblings need water to bath and go to school and others to work. I have passed my matric but I don’t have time to look for a job because this water crisis has put our lives on hold.”

“Everyone here brings a lot of containers because there is no guarantee that we will get water tomorrow. Washing is piling up at home. It is difficult to flush the toilet,” he said.

Half a kilometre from the Jojo tank, we found more than 60 people queuing next to a vandalised RDP house to collect water from a broken water pipe. They were from RDP houses located on higher ground. The abandoned RDP house, on lower ground, has water while they do not. People queue there from as early as 4am. They bend and clamp the severed pipe to control the flow. 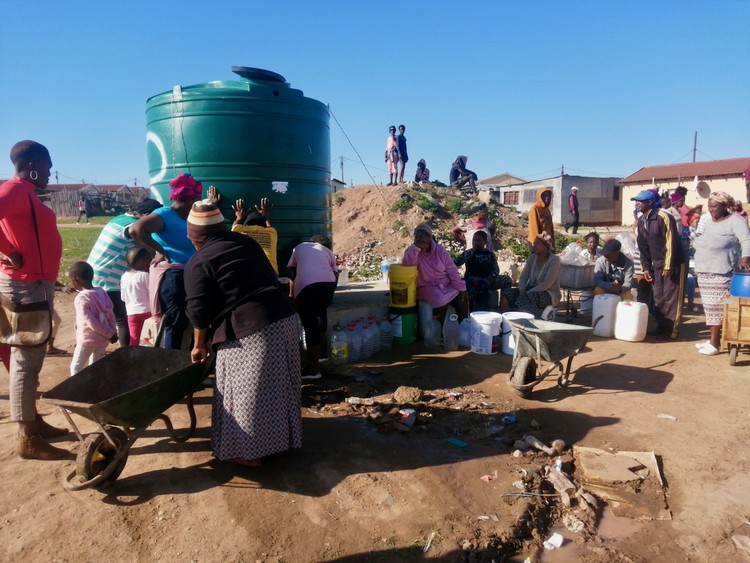 Chris Hani residents in Kariega queuing for water at a JoJo tank on Saturday.

On Friday in Booysens Park, Gqeberha, we found women in pyjamas doing laundry. They said they filled their buckets at 2am. “We only get water from 1am – by 5am the taps are dry again,” said Phumeza Solani.

The women told GroundUp that the water tanker deliveries had become unreliable in the past three months, sometimes absent for four days. “When it comes, people push one another in order to fill dozens of their buckets,” said Solani.

The women also complained about the quality of the water and said it stained white clothes.

Nobuhle Futshane, who has a 20-month-old baby, said, “I am no longer making baby formula with the water from our taps or the tankers because they cause my baby’s stomach to run. The water looks dirty and I decided to buy water from the shops in order to drink and cook.”

“At 10pm daily I fill up my buckets and two-litre containers with water because the people of Vastrap don’t want us to make long queues at their communal standpipes. They say we will make their taps dry,” said Grootboom.

GroundUp visited four dams that supply the municipality – Loerie, Kouga, Churchill and Impofu. We were denied access to Groendal Dam. 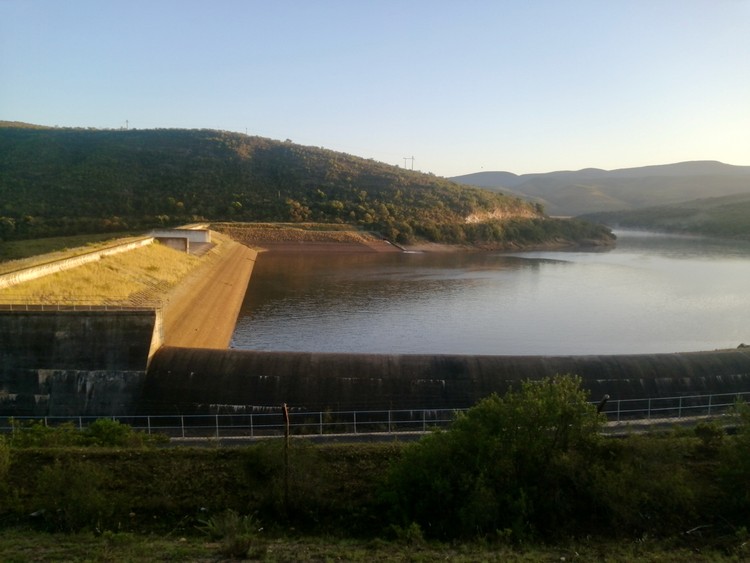 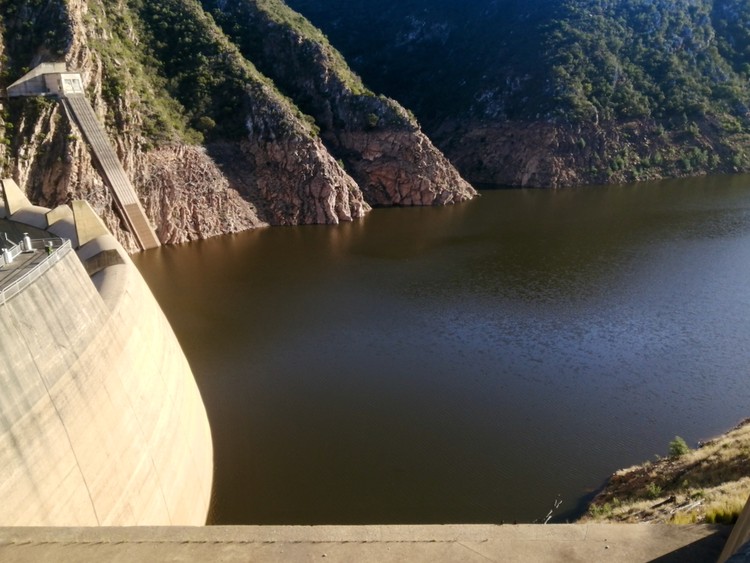 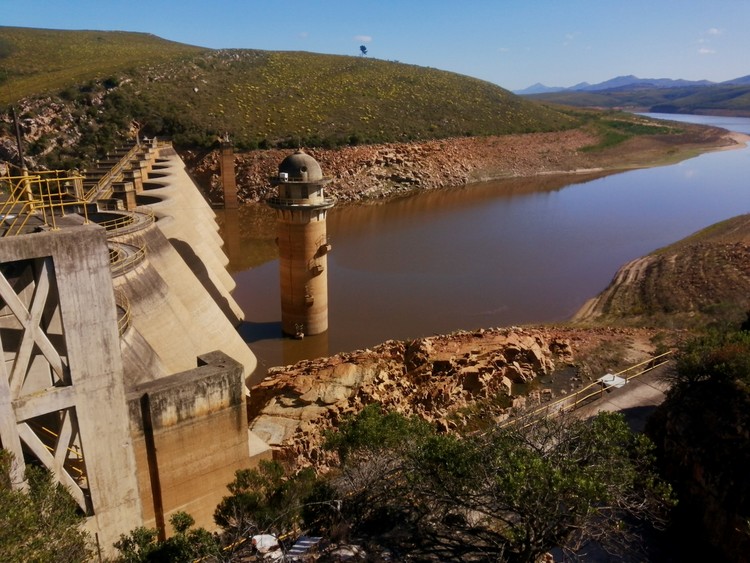