“Government appears to be leveraging the pandemic to suppress dissent” 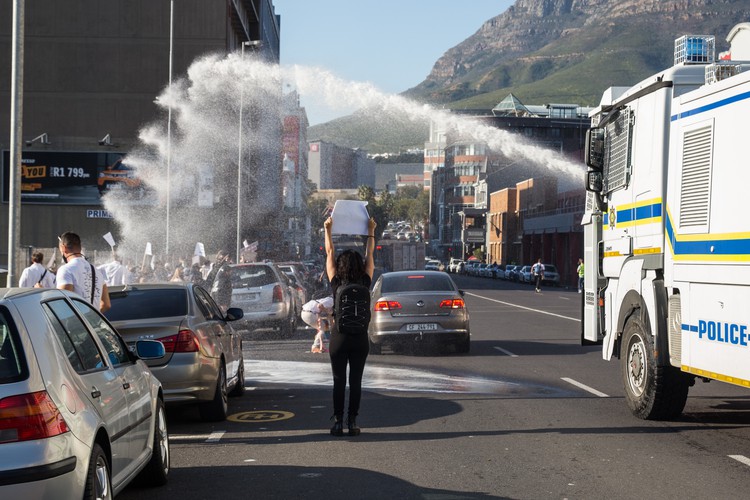 Police disperse demonstrators outside Parliament during a protest in September 2020 against Covid-19 restrictions in the hospitality and tourism industry. Archive photo: Ashraf Hendricks

This month, the Ministry of Cooperative Governance and Traditional Affairs (COGTA) published updated regulations with amendments to the December and January adjusted alert level three lockdown.

A number of measures aimed at preventing the spread of Covid-19 were relaxed, including bans on gatherings at faith-based institutions. Yet, there have been no updates to the regulations on “political gatherings”, which were explicitly banned under the January regulations.

Many people in South Africa still seek to exercise their right to assemble peacefully but have been warned against doing so, citing the current regulations.

Yet, other kinds of gatherings are permitted, for example up to 100 people may congregate at a public swimming pool, where wearing a face mask is almost impossible and physical distancing can be difficult.

On 3 February 2021, the Food Alliance Union approached the Tshwane Municipality to give notice of a protest in terms of section 3 of the Regulation of Gatherings Act. The Union intended to submit a memorandum of demands to the office of the Presidency at the Union Buildings covering their concerns about the lockdown provisions which have affected their members’ lives and livelihoods. In a few words, the responsible officer at the municipality wrote back to the convener informing him that “gatherings are still prohibited” under the January regulations.

But days later, on 11 February, 50 members of Parliament gathered to listen to the President deliver the State Nation of Address (SONA). This was, by all appearances, a “political gathering”. Government’s policy, principles, actions, failure and commitments were being unpacked. The attendees represented different political parties.

Once again, on 16 February, a number of Members of Parliament from various political parties gathered to respond to and debate the President’s address.

The prohibition of “political gatherings” is illogical and irrational, more especially if people can gather at a public beach or swimming pool, but are immediately criminalised when they gather to challenge the government. It should really be a concern when a democratic government criminalises a fundamental right that people use as a last resort to express their views.

The ban on “political gatherings” must be lifted if we are to properly reflect the basic tenets of our democracy, particularly in light of section 17 of the Constitution.

The prohibition is not that surprising given the government’s history of intolerance around protest action. Often protesters face arbitrary arrest; many are met with police brutality. Currently, we are being denied this right totally. This includes protests that may give the government a clearer idea of what is happening on the ground and what people need in order to help fight Covid-19.

But the government appears to be leveraging the pandemic to suppress dissent. The prohibition on “political gatherings” is shutting people even further out of the political decision-making process in the name of a global pandemic.

We appreciate that the current regulations are in place to curb the spread of Covid-19, but our laws (even the lockdown regulations) must be rational. It is irrational that 100 people can gather at outdoor venues for leisure activities, but the same number of people are prohibited from exercising a constitutionally guaranteed right to protest.

The Right2Protest Project (R2P) has written to COGTA, requesting it to review the current regulations to recognise and promote the democratic right to protest by uplifting the ban on “political gatherings”.

Next:  “God always puts something out for us” says scrap collector

Previous:  The court battle for Kannaland