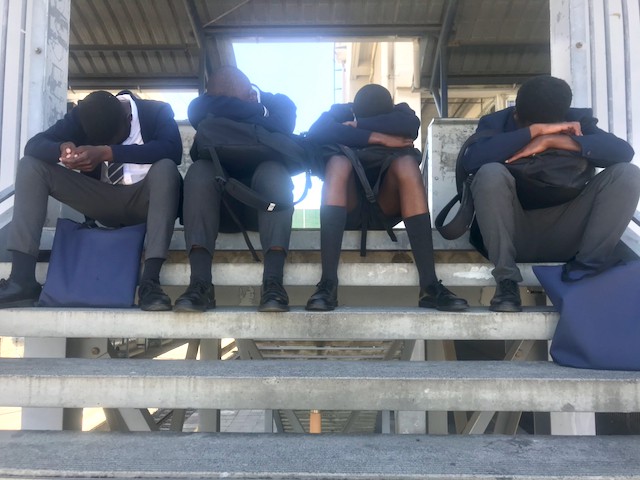 Learners wait for a train to Langa at Mutual station on Wednesday afternoon. They were the only passengers at the station. Many people are still hesitant to return to using trains. Photo: Tariro Washinyira

On Tuesday, Passenger Rail Agency of South Africa (PRASA) restored a limited Central line service with trains operating from 6 to 9am and 3 to 5pm on the Langa to Cape Town track. The service was suspended in October 2019 and since then an informal settlement has spread close to the railway lines making it unsafe for the service to continue further than Langa.

When GroundUp bought a ticket at Langa station at 2:45pm there were no passengers, only PRASA cleaners, ticket checkers, security personnel and marshals.

Train number 9419, without windows, arrived a few minutes before 3pm. There were only three other passengers.

Sam Chisanya said he is relieved that trains are now operating again on the Central Line. Life without a train service was difficult for him and his wife, who also travels to Cape Town to do domestic work. He is a builder and used to spend R180 per week on taxis, but now he would need about R59 for a weekly train ticket.

He said it seemed people are slow to return to trains. “They are afraid to risk arriving at work late. Many people already lost their jobs in the past because of the poor service.”

GroundUp found a group of learners waiting for a train to Langa at Mutual station. They had finished school at Windermere High School, Kensington. One of them said his mother had told him to try the train again to see if it worked.

“She doesn’t trust the train service any more. I used R20 every day on a taxi but with the train it is going to be cheaper as the weekly ticket to Mutual costs me about R50,” he said.

Commuters we spoke to said they were happy with the resumed service. However, large areas remain unserviced because of the encroachment of shacks along the line.

On Wednesday community leader of Siyahlala informal settlement Nomzomo Gatuya said a meeting that was postponed by PRASA after they were handed a ten-day notice to vacate PRASA land along the central lines over two weeks ago, has still not happened. “We are not leaving…. where will we go?” asked Gatuya.

On Wednesday, the United National Transport Union (UNTU) said PRASA had a duty to act when the first land occupations started. The union said that had PRASA hired security to protect the tracks the current problem would not exist.

In an email UNTU wrote: “Minister Fikile Mbalula should be held accountable for this [occupation]. It was Minister Mbalula and the former PRASA Board who cancelled the contracts of 20 security companies on 21 October 2019 without having an alternative plan in place that triggered the unprecedented vandalism and theft that we have witnessed nationwide.”

“UNTU has brought the matter to the attention of the Presidency, the Department of Transport, South African Police Service (SAPS) in May 2019 and handed several photos of the illegal land occupiers on the Central Line. The union also applied for a Section 77 strike certificate from the National Economic Development and Labour Council (NEDLAC) because PRASA was unable to adhere to its mandate to provide safe and reliable commuter rail services to the poorest of the poor.”

“There needs to be political will starting with the President. Since President Ramaphosa was stuck on a train for hours in Mabopane, north of Pretoria, UNTU heard many promises made, but all of them remained lip service.

“UNTU doubts that PRASA has the ability to restore passenger rail. The union made a presentation to the Presidential Task Team for State Owned Enterprises that PRASA should be merged back into Transnet where it was prior to 2006. Transnet has the ability to restore all the services of PRASA and it will strengthen both state-owned enterprises as most of the positions in the two are duplicated.”