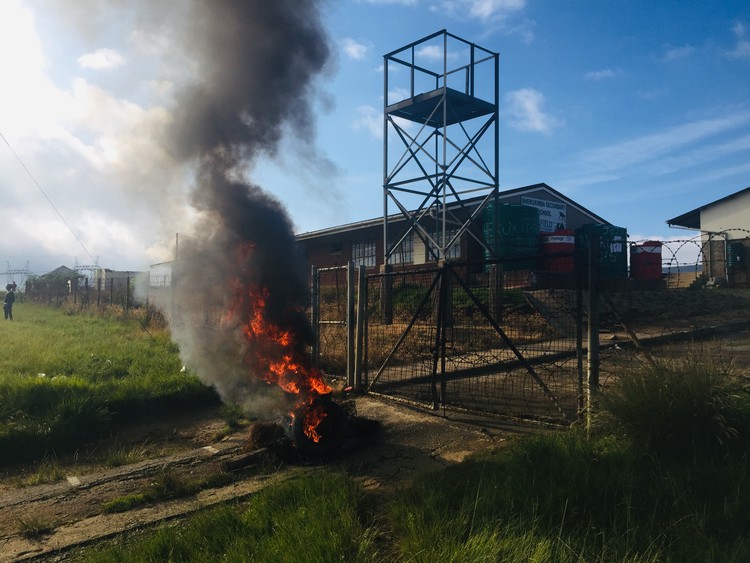 A tyre burning at the gates of Bhekuximba Secondary in Tafuleni location in Pietermaritzburg where frustrated residents shut down the school, demanding answers over the poor state of the school. Photo: Nompendulo Ngubane

Learners and teachers at Bhekuximba Secondary in Tafuleni location, Pietermaritzburg were forced to leave the school on Thursday morning when a group of residents stormed the place, demanding that the school be upgraded.

The same group then went to the neighbouring school, Bhekamatshe Primary, and removed learners from classrooms. They say the primary school, like Bhekuximba, has been neglected.

Community member Thuli Ngcobo said that Bhekuximba was dilapidated with broken windows with hardly any furniture in some classrooms.

She said some learners were sent home last Friday because there were no desks and chairs for them. “As you can see the grass has not been cut for months. We want an explanation on why our school has become such a mess,” she said.

Ngcobo said the poor state of the school has contributed to a significant drop in learner numbers. She said in addition to infrastructure issues, learners were only attending classes twice a week due to Covid-19 restrictions. She said learners are often sent home early when the school has no water.

“Learners must attend and finish their classes without being sent home because of the problems at the school,” said Ngcobo.

Another resident Sakhile Dlomo said learners will not be allowed to return to school until the school’s principal addresses their concerns.

“We have tried to speak to the principal but he has not given us any answers. He is not willing to speak to us. The closure of the school today is to draw attention to the Department of Education as well,” said Dlomo.

Speaking to the community, Deputy Principal Zanele Xaba acknowledged the residents’ concerns and pleaded for learners to be allowed to return to school. But the residents agreed only to let the grade 12s return on Friday.

Three circuit managers from the provincial education department also came to address the community. One of the district managers confirmed that the department had received complaints about the school. She said a team has been elected to investigate.

Several calls to the principal had gone unanswered by the time of publication.

KZN education department spokesperson Muzi Mahlambi said a meeting between the parents, the school governing body (SGB) and the principal is expected on Monday.

Previous:  Video: This comic was inspired by the Covid-19 pandemic